World’s Only Nun Doll Museum Is a Michigan Treasure 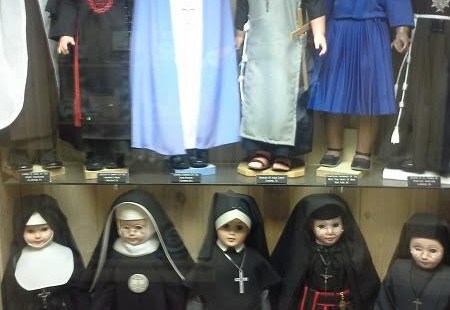 Northern Michigan is lovely in October, with the trees festooned in autumn glory and the lakes shimmering blue. But tourists who slip through tunnels of golden leaves near Indian River might easily miss one of the area’s most unique attractions: the Nun Doll Museum.

Michigan’s Cross in the Woods National Shrine, where the world’s only Nun Doll Museum is located, is worth a visit on its own. Since 1954, it’s been home to a cross hewn of a single redwood tree—at 55 feet, one of the world’s tallest crucifixes. In 1959, a bronze sculpture of Christ, carved by renowned sculptor Marshall M. Fredericks, was added to the cross. In all, the seven-ton corpus measures an impressive 22 feet wide and 31 feet high.

Each year more than 300,000 travelers stop at Cross in the Woods, and many of them pass through the Nun Doll Museum, which is located in the lower level of the parish church on the property. The museum is home to 525 dolls and 20 mannequins dressed in the traditional habits of American religious communities.

The entire nun doll collection is the work of one woman, Sally Rogalski. Even as a young girl in the 1940s, Sally Rogalski liked nuns, and she enjoyed dressing her dolls in the traditional habits the sisters wore at the time. What began as a childhood hobby “to preserve a bit of the history of the Catholic Church” continued into adulthood. After their marriage, Sally’s husband, Wally, supported her work and helped to build display cases in their home in Saginaw, Michigan, to house her collection.

In 1964, the Rogalskis donated the first 230 dolls to the Shrine, stipulating that no admission charge should ever be required, so that rich and poor alike would be able to see the dolls. Since that time the collection has grown. Sally communicated with members of religious orders, learning about their style of dress in order to accurately recreate their habits. Frequently, the religious communities would volunteer to furnish the habit and dress the doll. Wally Rogalski died in 1995, but Sally visits the Shrine several times each year and continues to add new dolls to the collection.

In 1998, Pope John Paul II offered his papal blessing and citation, thanking Sally and Wally Rogalski for their work “in helping to promote vocations to the priesthood and religious life through their doll collection.”

Although most of the dolls that stand in the doll museum’s glass showcases represent women’s religious orders, there are also dolls depicting diocesan clergy—bishops, priests and deacons—as well as religious brothers. In all, 217 religious orders from North and South America are represented.

Also included in the collection are dioramas that depict each of the seven sacraments, as well as various professional activities common to religious sisters, such as serving the sick in hospitals or teaching students in the classroom.

Since the Second Vatican Council in the 1960s, many women’s religious orders have abandoned the traditional habits in favor of simple skirts and vests, or secular clothing with a distinctive cross or pin representing the order. Before the sixties, though, both men’s and women’s religious orders wore habits that were designed by their founder and approved by the Church. Traditional habits might be black, white, blue or gray (or even pink), but they were most frequently floor-length styles. For sisters, the style of veil might distinguish one order from another, or it might be a unique pleated wimple, a fascia or cincture at the waist, or a stylized headdress by which Catholics could identify each order’s sisters.

From the Middle Ages, early Christian orders wore habits that were similar to the peasant dress of the day. The Sisters of Charity of Elizabeth Seton, for example, wore the dress common to widows of their era. Mother Teresa’s Missionaries of Charity adopted the blue-striped sari, based on the traditional dress of poor women in India.