Pope Francis to Jewish Leaders: From Enemies and Strangers, We Have Become Friends and Brothers 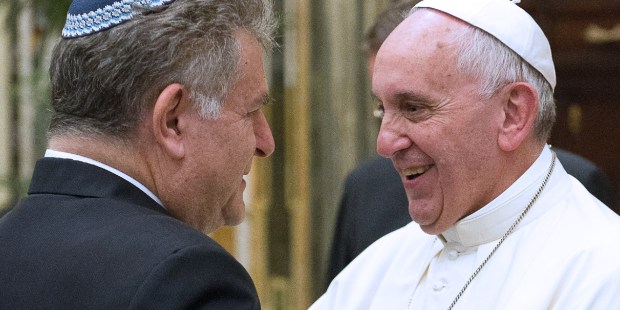 VATICAN CITY — A 50-year-old document on relations primarily between Jews and Catholics remains valid today, and its fruits can be seen in turning indifference and opposition into cooperation and benevolence, Pope Francis said today.

The Pope said these words at his Wednesday general audience, in the company of interreligious leaders, who were in Rome to commemorate the 50th anniversary of this document, called Nostra aetate.

Nostra aetate (Latin: In our time) is the Second Vatican Council’s Declaration on the Church’s Relation to Non-Christian Religions. The document was promulgated by Pope Paul VI on October 28, 1965.

After the reading of a passage from Nostra aetate in several languages, Pope Francis delivered a reflection.

“Vatican Council II was an extraordinary moment of reflection, dialogue and prayer to renew the gaze of the Catholic Church upon herself and the world,” he said.

“A reading of the signs of the times in order to bring her up to date, guided by a dual fidelity: fidelity to the ecclesial tradition and fidelity to the history of the men and women of our time. Indeed, God revealed himself in creation and in history, spoke through the prophets and then fully in his Son made man, addressing the heart and soul of every human being who seeks the truth and the way to practice it.”

Pope Francis recalled several key points outlined in Nostra aetate: the growing interdependence of peoples; the human search for meaning in life suffering and death, questions that always accompany our journey; the common origin and common destiny of humanity; the unity of the human family; religions as the search for God or the Absolute, within the various ethnic groups and cultures; the Church’s benevolent and attentive view of all religions, which does not reject anything good or true in them; the Church’s esteem for all believers of all religions, appreciating their spiritual and moral commitment; and finally, the Church’s openness to dialogue with all, while remaining at the same time faithful to the truth in which she believes, starting from the salvation offered to all that has its origin in Jesus, the only Savior, and which is carried out by the Holy Spirit, as the source of peace and love.

He also noted that over the last fifty years there have been many initiatives and examples of institutional or personal relations with non-Christian religions. The most significant among included the meeting in Assisi on October 27, 1986, promoted by St. John Paul II.

He also praised the great transformation that has taken place in this period in the relationship between Christians and Jews. “Indifference and opposition have turned into cooperation and benevolence,” he remarked. “From enemies and strangers, we have become friends and brothers. The Council, with the Declaration Nostra aetate, showed the way: ‘yes’ to the rediscovery of the Jewish roots of Christianity; ‘no’ to any form of anti-Semitism and condemnation of any resulting injustice, discrimination and persecution. Mutual knowledge, respect and esteem constitute the way that, valid for relations with Jews, is similarly relevant to relations with other religions.”

Pope Francis continued: “I think in particular of Muslims who, as the Council states, ‘adore the one God, living and subsisting in himself, merciful and all-powerful, the Creator of heaven and earth, who has spoken to men.’ They refer to the paternity of Abraham, they venerate Jesus as a prophet, they honor his Virgin Mother Mary, they await the day of judgment, and practice prayer, charity and fasting.

“The dialogue we need cannot be other than open and respectful, and in this way it is shown to be fruitful. Mutual respect is the condition and the aim of interreligious dialogue; respecting the rights of others to life, physical integrity and fundamental freedoms: that is, freedom of conscience, thought, expression and religion. The world looks to us as believers, and exhorts us to collaborate among ourselves and with men and women of good will who do not profess any religion, and asks us for effective answers on several issues: peace, hunger, the poverty that afflicts millions of people, the environmental crisis, violence, especially that committed in the name of religion, corruption, moral degradation, the crisis of the family, the economy and finance, and above all, hope.”

Believers may not have solutions to these problems, he said, but they do have a most powerful resource: prayer. “We must pray. Prayer is our treasury, which we draw from according to our respective traditions, to ask for the gifts for which humanity yearns,” he said.

While Pope Francis acknowledged that violence and terrorism have given rise to “an attitude of suspicion and indeed condemnation with regard to religions,” he said that “since no religion is immune to the risk of fundamentalist or extremist deviations by individuals or groups, it is necessary to look instead to the positive values they embody and promote, and which are a wellspring of hope. … Dialogue based on trustful respect can bring seeds of goodness that in turn become the buds of friendship and collaboration in many fields, and especially in service to the poor, the smallest and the elderly, and welcoming migrants and the excluded”.

The upcoming extraordinary Jubilee of Mercy will offer an opportunity for collaboration in charitable works, he added. “And in this field, where compassion is most important, we can join with many people who do not consider themselves to be believers or who are in search of God and truth, people who place the face of others at the center, especially their brothers and sisters in need. But the mercy that is required of us embraces all creation, that God entrusted to us as its custodians rather than exploiters or destroyers. We must always seek to leave behind a better world than the one we found.”

The pope concluded urging all those present to pray for the future of interreligious dialogue and to pray for each other.

“Without the Lord, nothing is possible. With him all things are possible. May our prayer fully adhere to the will of God, who wants all men to acknowledge each other as brothers and to live as such, forming a great human family in the harmony of diversity.”

Following greetings in various languages, Pope Francis invited all those gathered for Wednesday’s general audience to pray to the Lord, each following his or her own tradition, that he might make us brothers together and servants to our brothers in need.