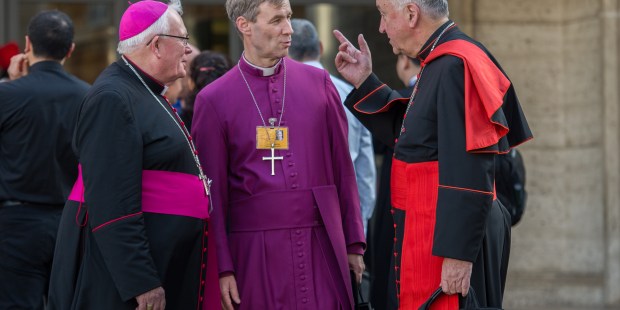 The synod was neither a great success nor a huge failure, but a useful marker

So now it’s up to Pope Francis.

Followup to the Synod on the Family rests firmly in the hands of this paradoxical pontiff who champions consultation, collegiality, and synodality while practicing a highly centralized management style.

The Pope’s closing remarks to the synod October 25 offered few solid hints about what he would do. But they were classic Francis, combining a heartfelt homily for “mercy” with a tongue-lashing for people who don’t see things as he does (“closed hearts…superiority and superficiality”)—a group in which he presumably meant to include a number of synod participants.

The synod itself was neither a great success nor a huge failure. Efforts at straddling were visible in the fact that some commentators hailed it as a victory for liberals while others called it a triumph for conservatives.

Dogged by complaints of rigging, the leaking of a sensitive document, and public spats among prominent members of the hierarchy, the gathering’s principal achievement may not have been anything its final statement said but the elimination of problematical passages in the working document the bishops were handed at the start.

The statement made no specific reference to communion for divorced and remarried Catholics whose first marriages haven’t been annulled. But it did describe a process of “discernment” that some said could have that result on a case-by-case basis. It also strongly opposed so-called gay marriage, another question that received much attention in the media if not within the synod itself.

Decisions now are up to the Pope, just as they were all along. His intentions are unknown to all but his small circle of advisors, and perhaps not even to them.

Some preliminary conclusions nevertheless are possible. Here are four.

First, there are significant divisions in the leadership of the Church. The synod brought these to the surface in dramatic fashion.

The divisions are usually cast in terms of “liberal” and “conservative,” though the inadequacy of those words is widely acknowledged.

But beyond the liberal-conservative split lie divisions of two other kinds: churchmen from developed countries (especially Western Europe) vs. churchmen from developing countries (especially in Africa); and “pastoral” bishops seeking ways to adapt to gale-force winds of cultural change vs. “doctrinal” bishops concerned above all with defending the integrity of Catholic teaching.

Second, the Church has much to say to married couples and families in this era of cultural crisis. This isn’t the Church’s own message but the message of Christ. But divisions along the lines sketched above, and the internal clashes to which they gave rise at the synod (as they do everywhere in the Church) are obstacles to making the message heard in the face of implacable opposition from a hostile secular environment.

An attention-grabbing synod widely perceived—as this one was—to be devoting a disproportionate amount of time to communion for the divorced and remarried and being more open to gays risks substantive irrelevance, no matter how much the media may cheer it on.

Third, “devolution”—a term signifying decentralization that became a buzz-word at the synod—would be a risky strategy if it involved shifting authority for nominally pastoral decisions with doctrinal implications to national conferences of bishops.

Some decentralizing may indeed be needed, or at least desirable, but de facto doctrinal decentralization would fracture Church unity. And a model for that already exists. It’s called the Anglican Communion. Enough said?

Finally, it’s clear that the next time a synod rolls around, it would benefit from openness and candor in place of the unnecessary secrecy often plaguing this one.