Among the Modern-Day Martyrs of San Bartolomeo 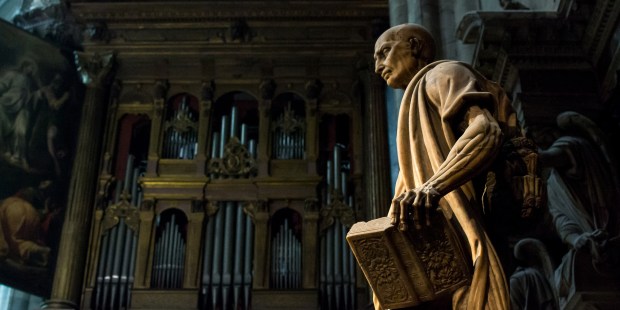 I recently traveled for two weeks to Rome. By my invisible presence and silent prayer I sought to be in solidarity with the Synod on the Family.

The churches were stupendous. The ruins were sublime. But I couldn’t get over the Tiber, which runs north to south through the city, and which Romans largely ignore. For most of my visit the water was a dreamy green (later brown). Still, if such a river ran through the middle of my own city of LA, the whole thing would have been turned into a mall or at the very least an overcrowded bike path.

As it was, other than the stray jogger, cyclist or stroller, I had the Tiber almost to myself. My rented studio apartment was by the Ponte Sisto, and I loved descending the stone steps to walk along the ancient cobblestones, pass beneath the crumbling, moss-covered bridges and marvel at the curving lines of lamps as they came on at dusk.

A few bridges down I noticed a little island and, after several days, made my way over. That was when I stumbled upon the Basilica di San Bartolomeo all’Isola, the Memorial of the New Martyrs.

The church dates back to the Roman Empire. The website explains:

In 1999, anticipating the celebration of the Jubilee 2000, Pope John Paul II created a Commission to the study the life and history of the New Christian Martyrs of the 20th century. For two years the Commission worked in the Basilica of St. Bartholomew, collecting approximately 12,000 dossiers on martyrs and witnesses of faith from dioceses all around the world.

Among the fruits of this study was the ecumenical prayer at the Coliseum, when the Pope gathered with several representatives of various Christian churches during the Jubilee celebrations. The event revealed that the multitude of Christian believers killed or persecuted in the last century is like a continent still waiting to be explored, a heritage that all Christian denominations share.

After the Jubilee, John Paul II wished that the memory of the witnesses of faith of the 20th Century were made visible in the Basilica of St. Bartholomew.

Each chapel featured a large glass case of relics. (The labels were in Italian so I looked up the relics online in translation after.)

“Chalice, paten and stole of Don Andrea Santoro, Catholic priest missionary in Turkey, killed while he was praying in his parish in Trabzon, on the afternoon of Sunday, February 5, 2006.”

“Rosary and “discos” of Father Alexander Men, Orthodox priest from Moscow, killed on September, 1990, as he was on his way to his church to celebrate the Sunday liturgy.”

It’s one thing to visit the Colosseum and contemplate the martyrs who were thrown to the lions 1800 years ago, but these men and women who had been killed for the faith 70, 50, and as recently as eight years ago moved me in a way that was more immediate and more piercing.

In fact, the Church has produced more martyrs in the last 100 years than in the previous 1900 put together.

“The Bible of Floribert Bwana Chui-young of the Community of Sant’Egidio of Goma (Congo), tortured and killed in the night between June 8 and 9, 2007, for failing to bend to bribes.”

“The missal of Archbishop Oscar Arnulfo Romero, killed while celebrating the Eucharist on the altar, March 24, 1980.”

“A letter written by Blessed Franz Jägerstätter husband and father, beheaded by the Nazis for refusing to fight for the German army.”

In 1938, Jägerstätter cast the only vote in his village against joining the Third Reich. He underwent military training from 1940–41, but the experience only sharpened his resolve to resist serving under Hitler. To his wife he wrote: “Christ said that whoever wants to be my disciple must take up his cross and follow me.”

In notebooks he kept from 1941–43, he remarked upon, but did not blame, the priests and bishops who had chosen to go along with the Nazis and counseled their parishioners to do the same. He dreamed one night of a train that was going to hell. He asked himself: “What must people of other beliefs think about us and about our Christian belief when we value it so little?”

Many of his fellow Catholics criticized Jägerstätter’s decision, accusing him of neglecting his moral duty as a husband and father. He rejoined: “Is someone permitted to lie in taking an oath just because he has a wife and children? Did not Christ himself say that whoever loves a wife, mother and children more than me is not worthy of me?”

Across the Tiber and several bridges north, cardinals and bishops from all over the world were debating the human family. Close by were the world-renowned schools of theology where many of them had been trained: the Pontifical North American College, the Pontifical Gregorian University, the Pontifical University of the Holy Cross.

Jägerstätter had a seventh-grade education. But he had the firmest possible grasp of “family values.”

Heather King is the author of Stumble: Vice, Virtue and the Space Between.