5 Non-Saintly Films That Moved Me toward Sanctity

“One problem with our great feast day today is that it can make sanctity seem like something that is the special preserve of a handful of spiritual heroes—and not the ordinary goal of the Christian life. But the whole purpose of the Church—priesthood, the Mass, the sacraments, good preaching, the corporal and spiritual works of mercy—is to make saints. There is only one real sadness in life: not to be a saint. Don’t miss the opportunity.”

—Bishop Robert Barron,“What Does It Mean To Be A Saint?”

In the world of Catholic cinema, there is a certain strain of saint movie that seems to traffic primarily in the currency of “pious” and “well-intentioned.”

I don’t like this strain, primarily (I fear) because I am neither pious nor particularly well-intentioned. But I tell myself that my dislike is tied to a deeper, more problematic reason: that it perpetuates what I think of as The Athenian Theory of Sainthood—the notion that a saint springs full-formed from the forehead of God, and that his or her primary purpose is to serve as a kind of paradigm; an exemplar for us to aim at, rather than guides—or, more importantly, fellow travelers—along the path to sanctity.

These pious tendencies to canonize every waking moment of a saint’s life often manifest themselves in a sort of spiritual revisionism, taking their subjects from the saintly odor of their final moments on earth and retroactively placing them in the historical events that occurred throughout their lives, thus rendering the primary conflicts in their stories external ones rather than internal. In these kinds of cases the story becomes less about each saint’s journey and more about the world’s inability to embrace sanctity. And while it is certainly true that the world hates to be confronted (and corrected) by the saints, I can barely recognize myself or my life in these stories. Rather than being inspired and encouraged by them, I feel too distant from their conflicts to be either. Sanctity too often feels hopelessly out of reach, something most often achieved by demi-gods rather than by ordinary humans.

Lest I tar the tastes of others (or my own tendencies) with too broad a brush, there are certainly times when Pious and Well-Intentioned Saint Films have been a salve to me. But far more frequently they have been a frustration. I prefer my saints cranky and imperfect, struggling and falling and getting up to carry their crosses once more. In other words I prefer my saints human. (This is, surely, why I’ve always cared more for the likes of biographical films such as Monsieur Vincent, Vision: From the Life of Hildegard Von Bingen and A Man for All Seasons, whose protagonists are shown with their warts and flaws, rather than dutifully Photoshopped.)

So today’s list focuses not on the lives of canonized saints but on some of the films I’ve seen in the past few years that have moved me powerfully to think on the “lived-in” struggles and virtues by which one might achieve sanctity in one’s own life.

1. In America– In Jim Sheridan’s fantastic film about a young Irish immigrant family struggling to make it in New York City, the unexpected (and largely unwanted) pregnancy of his wife, Sarah, is the catalyst that brings out-of-work actor Johnny to terms with the event that caused them to flee Ireland in the first place, and which has been eating away at their family from the inside—the death of their only son. With the help of their mysterious neighbor (the artist Mateo), the family struggles to find peace in the midst of the fear that accompanies their newest blessing. Filled with small, insightful moments about the way spouses relate to each other and to the most tangible signs of their love (their children), it is a film that speaks movingly about the risks and rewards of being open to life in any form, recognizing that our willingness to embrace it means we must also be prepared to embrace the salvific suffering that will always accompany it.

2. Diary of a Country Priest (Journal d’un curé de campagne)– Based on the powerful and thought-provoking novel of Georges Bernanos, this film from legendary director Robert Bresson is a spiritual punch in the gut. The Curé d’Ambricourt, a frail and newly-ordained young priest who arrives in a small village in the French countryside to take up his first parish assignment, only to discover that his ministrations (indeed, his very presence) is largely unwanted—or even worse, merely tolerated by his painfully indifferent flock. Burdened by rapidly failing health and plagued by both the calloused apathy of his parishioners and his own insecurities and doubts regarding the faith, he struggles to embrace his vocation all the same. Bresson’s masterpiece is an austere and sober look at two things that scare me a great deal about sanctity: the reality of The Dark Night of the Soul, and the challenge to sacrifice oneself completely and without reservation, doing the right and virtuous thing regardless of public notice or adulation, or even earthly reward. It is an aching reminder that this life is truly a vale of tears, and seeking to live your faith to the fullest will always be accompanied by doubts and by suffering. Yet at the same time, as the good Curé reminds us, “God is not a torturer,” remonstrating with an obdurate countess that God “is not the master of love. He is Love itself. If you would love, don’t place yourself beyond Love’s reach.” 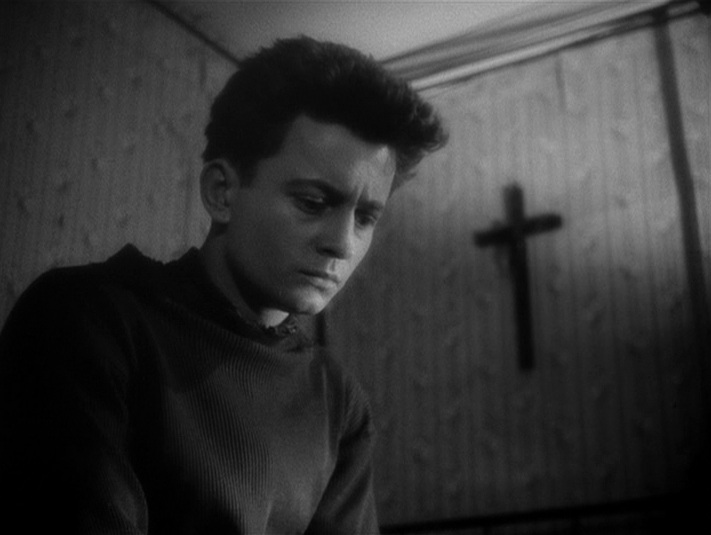 3. Of Gods and Men – The most recently made film on the list, this edifying account of the lives (and deaths) of the Trappist monks of Our Lady of Atlas Monastery in Algeria (who were assassinated by extremists in the mid-90s) resonates for a number of reasons. Firstly because it feels like such a wonderfully moving (and truthful) account of living in community, where humans will bump up against one another’s sharp edges and will squabble over petty insignificancies, yet will deeply respect and love one another all the same. And second, because it is such a reminder of the importance of praying for perseverance. The prospect of embracing a martyr’s death for one’s beliefs is difficult for many to imagine. Yet for me—seeing myself mirrored in the thoughts of the young heroine from Flannery O’Connor’s “Temple of the Holy Ghost,” who knows she “could never be a saint but thought she could be a martyr if they killed her quick”—the idea of reaching the end of one’s life in the very same act that assures your final salvation is a strangely appealing one. Yet it is also unlikely for the vast majority of us, which is why this film’s greatest gift is the pricking reminder that we must all pray daily for the virtue of final perseverance.

4. The Son (Le fils)– From the Belgian brothers Jean-Pierre and Luc Dardenne comes an astonishingly insightful examination of our often inexplicable desire to forgive and to be forgiven in turn. The story is deceptively simple: Francis, a troubled youth only recently released from prison, is brought to the carpenter shop of Olivier for rehabilitation into the workforce. Olivier instantly recognizes him as the one responsible for the death of Olivier’s son a few years before and takes him on, though it is unclear what motivates his decision. For the viewer, the film’s impetus (and its coiled, unrelenting suspense) hinges on the question of whether Olivier will act upon his understandably vengeful tendencies, yet the notion of revenge, while ever-present, is never at the forefront of Olivier’s mind. He’s after a completely different kind of retribution. In one of the film’s most pivotal scenes, Olivier’s ex-wife, Magali, discovers Francis’s identity. Devastated by Olivier’s willingness to reach out to the very person responsible for their suffering, she berates him for his attempts at reconciliation: “Nobody would do that,” she says. When he agrees, she demands, “So why you?” His response: “I don’t know.” And neither do we. But we want to be like him: forgiving rather than consumed by vengeance, even if we don’t understand his actions.

5. Three Colors (Blue, White, Red) – This last selection feels like a bit of a cheat. … Okay, it’s straight-up cheating because it’s three films, not one. And that means summarizing them is well-nigh impossible. Yet these three works from enigmatic Polish director Krzysztof Kieślowski are extraordinary—both individually and (even more so) as a single creative whole. They capture an astonishing range of human brokenness, struggles and (eventually) redemption, and while their protagonists’ stories are frequently unsettling and sorrowful—even, sometimes, sordid—the extraordinary insights into the highs and lows of the human condition left me breathless when I watched them for the first time. And every subsequent viewing leaves me even more impressed and moved than before. It’s not so much that their themes are specifically about virtue (or spirituality, even). But there’s a comprehensiveness and attention to the importance of small details that leaves me feeling like I’ve watched an entire life—or many lives—unfold before my eyes. And while I frequently wonder if I truly understand what Kieślowski’s trying to say in these films, I always come away with a deeper appreciation for the complexity and interconnectedness of our lives, and a reminder to treat others with an awareness that they too are struggling; they too are searching for truth and virtue. And that they will often be the most obvious, most palpable presence of Christ in my life.

Joseph Susankais a columnist for Patheos and has been doing development work for institutions of Catholic higher education since graduating from Thomas Aquinas College in 1999.