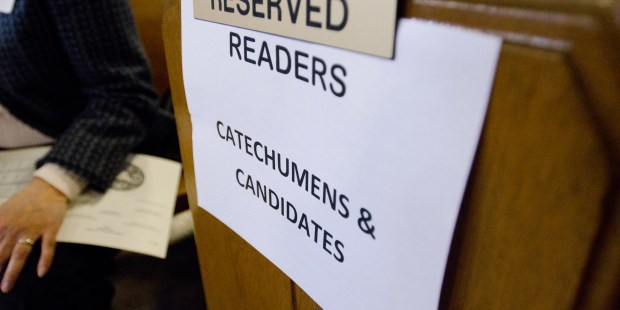 There is a right way and a wrong way to evangelize

I was baptized as a Catholic when I was 6 weeks old but was only brought to Mass for special family occasions. I first “met” Jesus when I answered an altar call in the First Baptist Church around age 10. I answered a lot of those calls after that because I never really felt like Jesus and I were in a true relationship. Something didn’t “click,” which made me think he didn’t really want to be in a relationship with me. When I got tired of answering altar calls, I just walked away from organized religion altogether.

The first time I started RCIA, I was 16 and six months pregnant with my oldest child. Someone told the priest at the parish I lived next to that I was knocked up, and he showed up at my door to tell me I needed to get my sacraments and baptize my baby or we would both go to hell.

The 20-something guy who had knocked me up was the son of a Catholic deacon, and yes, when I told the father of my child I was pregnant, abortion was suggested. So you can see, even if the Baptists hadn’t told me Catholics were evil, my distrust of Catholicism was well-founded.

I didn’t want to go to hell, so I started the RCIA classes, but I wasn’t going to just sit back and check a box. I had questions! The first day I asked a question about worshipping Mary, and the nun teaching the class told me that was an insult and went on with her lesson on the Rosary. In the second class I asked why God would send my kid to hell just because I didn’t sprinkle his head with holy water and have a party. I had other questions, but I was told I was interrupting and my questions were never answered.

I stopped going to RCIA, gave the Catholic Church (and my baby’s daddy) the finger and raised my son without help from either of them.

In 2009 I started RCIA again after my live-in boyfriend told me he would only marry me in the Catholic Church. I have no idea why he told me that. We were not even remotely interested in living according to Catholic teaching. With no intention of changing anything about my beliefs or lifestyle, I found myself in Fr. J’s office, very angry and still giving the Catholic Church the mental finger—and still asking all those same questions, arguing every point he made. I refused to hate gay people or worship Mary, and I didn’t think God sent babies to hell just because they weren’t baptized. I also knew a lot of Catholics who didn’t practice what they preached, and anyway, what about priests molesting kids?

And you know what he did? He answered me. He helped me to find answers and taught me how to read Church documents.

Father J did not freak out when he was challenged. He, along with so many other great people in my life, made it clear that I will never get to a place where I’m so Catholic I won’t have questions.

Because this was my experience, you’d think that, upon becoming Catholic, I would be willing to answer all kinds of hard questions. You would be wrong. Once I developed a real relationship with Jesus and the Church, I became so very defensive. Any kind of question about Catholicism sent me into protection mode. I would shoot down questions and judge people who didn’t see things my way. I was very self-righteous, and I made an enemy because of it, which still haunts me.

I alienated a lot of people, including my oldest son, who no longer goes to Mass because of my “my-way-or-the-highway” attitude. It caused issues in my marriage, and those wounds have been the hardest to heal.

There is a right way and a wrong way to evangelize. The only right way is to discern where exactly is your place in someone else’s journey. To ask the Holy Spirit to give you direction, because sometimes he just expects you to be there for someone—no advice, no instructions on how to do something “right” or think in a straight line—just to be there for them.

Meeting people where they are doesn’t mean watering down the faith. It means taking direction from the Holy Spirit, knowing it is only by God’s grace that anyone hears him calling them, not by our harangues and nagging and correction. We have to be able to smile through the hard questions without being scared or offended, even if those questions are not asked with kindness or charity.

I certainly didn’t ask Fr. J questions in a good way at first, but he always responded in charity anyway. And through him, the Holy Spirit made a Catholic out of me.

The most important thing to remember is that if someone is asking questions, God is speaking to them, and even if they have no idea that they are listening to him, they are.

We have to be his instruments—pipelines, not roadblocks.

There will always be questions. To deny anyone his or her right to ask a question is wrong, no matter who the person is, or how much he or she is supposed to know. Nobody in this world knows it all. We are all pilgrims, and hearing and answering questions is something the Church should be glad to do.

Leticia Ochoa Adams is a radio host at Breadbox Media and a regular contributor to the Jennifer Fulwiler Show at the Catholic Channel on Sirius XM. She writes at http://www.letiadams.com and at Catholic Stand. She is a full-time philosophy student at Holy Apostles College and Seminary. She is married, with four kids and three stepsons, and at the ripe age of 38, she boasts about her two grandchildren.