May They Rest In Peace—But Not Us 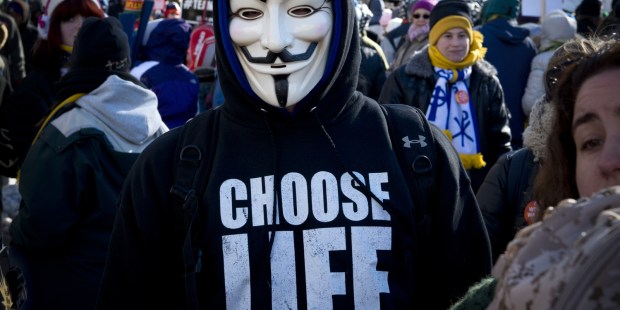 Jeffrey Bruno
WASHINGTON,DC 22 JAN: Images from the 2014 March for Life in Washington DC on January 22, 2014. This marks the 41st anniversary of the infamous Roe v. Wade Decision that legalized abortion. Ten's of thousands of people who support the Pro Life movement gather each year to make the voices of the 56 million aborted children heard
Share
Print
Tom Hoopes - published on 11/02/15

Do you know who is haunting All Souls Day?

“To comfort the afflicted and afflict the comfortable” was a motto of Dorothy Day. How might we do that?

Today, the Church celebrates All Souls Day, praying for all the dead who have gone before us.

Some of us will visit graveyards or mausoleums, and some of us will set up pictures and burn candles at Dia de los Muertos altars in own homes. We will repeat the names of those who are missing from our lives: Michael, Uncle Pete, Mom.

“Blessed are they who mourn, for they will be comforted,” says the Beatitude.

The corollary isn’t stated but is certainly true: “Woe to those who do not mourn, for they will find no comfort.”

When you mourn the dead, you acknowledge their infinite dignity and worth, and seeing their worth (and remembering your own), you are comforted.

But what about those who aren’t buried, who have no pictures and who were never given a name? To refuse to mourn them is to refuse to acknowledge their worth. You lose the ability to be comforted, because if they are worthless, then so are you.

This is what has happened through the tragedy of abortion: its pain is multiplied by our inability to mourn it.

Sometimes “not mourning” means anger: painful situations lead to abortion, and we push the sorrow away with bitterness and blame.

Sometimes not mourning means cynicism: to accept abortion, we have to strip life of its meaning with jokes or superficiality.

Often, not mourning means depression: the hurt of abortion is too big to face, so we don’t, and we are frozen in darkness instead.

She describes her abortion as a 21-year old: “My right arm clutched my abdomen. It was burning in pain. I walked out onto the street alone in the dark. … Lionel, my boyfriend, promised to pick me up at the flat after it was all over. I waited in pain from 9 a.m. to 10 p.m., but he never came.”

Thereafter came the anger and bitterness, the party scene and the depression. But then conversion.

A friend of mine once confronted an acquaintance who’d had an abortion. He told her he loved her but she shouldn’t have done what she did. She broke down and cried, saying, “Thank you. Thank you.” She said no one else had been willing to tell her the truth, and of course she knew the truth.

She knew her child deserved better, and that meant she did too.

The most chilling comments on abortion I have ever heard are not from the women on Twitter claiming to be proud of their abortion. They are just sad, stuck in the cycle of denial.

The worst I heard was from fellow prisoners after I was sentenced for trespassing at an abortion protest in San Francisco. On a work-release program, the question would invariably arise: “What are you in for?”

Most people would say “drunk driving,” and then tell their story. I would say “protesting at an abortion clinic” and then wait out the silence that followed.

But a few comments leaked out. “Come on,” said one guy, almost angrily. “Let the b*tches do what they want.”

Abortion’s morality was beside the point. It was necessary for sexual license. If women were willing to do that, then why interfere?

He was totally comfortable with abortion.

Another guy, a supervisor who told me he was a Mormon, took me out in his truck to talk. “I love that you did what you did,” he said when we were alone. “My girlfriend and I always vote pro-life. We have had four abortions, but we think it should be illegal.”

He was also comfortable with abortion, with his life split in two between profession and practice, his “personally in favor but publicly opposed” position.

May the souls of the unborn rest in peace. May their mothers mourn and be comforted. And may God give our consciences no peace at all, as long as lives are destroyed in our midst.