Why Is the Pope Always Dressed in White? 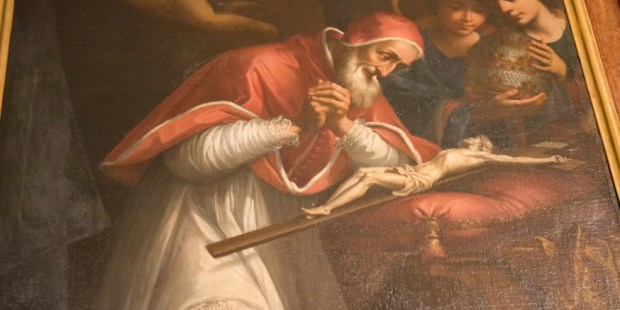 For the answer, we have to look back to Pope Pius V, a Dominican friar

When the Dominican friar Michele Ghislieri (the name before his religious profession was Antonio) became the 224th successor to St. Peter in 1566, he took the name Pius V, but he did not wish to give up the habit of Saint Dominic de Guzman that marked him as a member of the Order of Preachers. The distinctive white robes have since become standard papal apparel.

That is the traditional understanding of why the pope wears white. In fact, Pope Pius V simply continued to wear the habit under his papal robes, as a sign of familial affection to the Order, but also as a sign of humility: beneath the symbol of authority invested in the papal garb, he remained a humble friar.

According to another tradition, still quite widespread in 1700 and reported by Filippo Bonanni, in his work “Of Sacred Hierarchy” (Roma 1720), the use of the white robe for the popes derives from “the appearance of a white dove at the time of the martyrdom of St. Fabiano” ( L’Osservatore Romano July 14, 2010).

Bonanni said that Pope Victor III, who was elected in 1086, resisted wearing the white under the purple cloak.

Guillaume Durand, with his 1286 treatise on liturgy Rationale divinorum officiorum, offers what some consider the fullest interpretation of the color of the papal robes: the white robe refers to the purity and holiness of life, while the red accessories symbolize the blood of Christ and his sacrifice for us.

The first papal ceremony focusing systematically on papal robes was prepared for Gregory X (1272–1273), while the precise codification belongs to the ceremonial written by Agostino Patrizi Piccolomini and John Burchard around the end of 1400. This would have the newly elected Pope wearing the white robe—in linen or other fabric according to the season—and cloaked in the red of the cardinal deacons, maintaining the stole according to his Order, should he belong to one.

And St. Pius V? If you visit the monastery of Santa Sabina on the Aventine Hill, which is the seat of the Order of the Dominicans, you may visit the Chapel of St. Pius V; looking up one will meet with the image of a severely ascetic pope, a protagonist of the Counter-Reformation, to whom we owe the catechism and the reform of the breviary and the Roman Missal. He wears a white robe and kneels before a crucifix that he, as monk and priest, would usually kiss every night.

St. Pius V and the angel

Painted on the opposite wall, one notes St. Pius V talking to an angel, who shows him the scene of a naval battle. The pope had been awaiting news on the outcome of the Battle of Lepanto, the pitched battle between armies of Christianity and the Ottomans of Ali Pasha, which took place on October 7, 1571. It was then that Pius V had a vision: he saw choirs of angels around the throne of the Blessed Virgin, who held in her arms the infant Jesus, and the Rosary. After the miraculous noontime event, the pope gave orders that all the bells of Rome should be sounded in a call to prayer. Just two days later a messenger brought the news of the triumph of the Christian forces. On October 7 the feast of “Our Lady of Victory” was established, which was then transformed into the festival of “Holy Rosary,” and ever since then the bells calling for the praying of the angelus have been rung at noon.