4 Ways to Misread a Pope and a Papacy 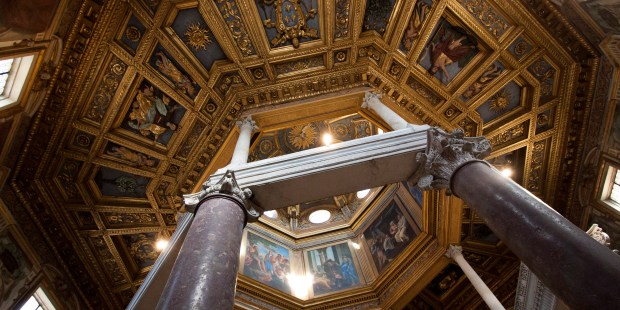 By ascribing singular gifts of a pope to the papacy itself, we set ourselves up for disappointment

Today is one of my favorite days on the Church calendar. It’s the Feast of the Dedication of the Lateran Basilica—the Church that serves as the pope’s cathedral.

Together with the papal feast day we celebrate in February, the Chair of Peter, the day serves to correct four common misunderstandings about the papacy.

First, most people think of the pope as a charming celebrity.

Many people admire the pope the way they admire actors: they love what they do without feeling at all beholden to their principles.

People loved John Paul II that way, thrilled he was pope while simply ignoring his teachings about contraception or women’s ordination, for instance. Many people love Pope Francis but pick and choose from what he says in the same way.

Polls would suggest that most Catholics fall into this category.

A corollary of the celebrity pope is a clueless bumbler pope.

For people who feel committed to one ideological worldview or another, the pope’s celebrity loses its charm.

Many enlightened commentators saw Pope John Paul II as a beguiling troublemaker, charming the hearts of the masses while threatening liberal progress. Commentators such as Rush Limbaugh fear Pope Francis in the same way, but as threatening conservative progress.

Both of these are the mistakes of people who model their lives after something other than our Christian faith.

Catholics who put the faith at the center of their lives should serve to correct them, but we often just make it worse.

Some of us make the pope a superhero.

The last two papacies unintentionally encouraged this kind of thinking: St. John Paul the Great was a deep intellect and transformational figure; Pope Emeritus Benedict is a genius theologian.

As Ross Douthat pointed out in his recent Erasmus Lecture for First Things, some of us in the “John Paul II Generation” started to quote that pope as though he were always right.

It was clear from his first homily that we couldn’t do that with Pope Francis.

I remember being shocked when I heard it. “When one does not profess Jesus Christ,” he said, “one professes the worldliness of the devil.”

I went to the theology floor at Benedictine College and asked, “Wait, did the Holy Roman Pontiff just pronounce all non-Christians to be devil worshipers?”

In answer, I heard the first instance of advice I would hear a lot in the days to come: No, that’s not what he meant. You have to interpret his statements from their context, and you can’t apply them elsewhere.

That’s easier for some of us to do than for others. By ascribing the singular gifts of John Paul and Benedict to the papacy itself, we had set ourselves up for a fall.

Hearing hyperbolic, incomplete or imprecise remarks by a pope should maybe try our patience. But for some (too many), it rocks our faith.

The pope as overlord.

A derivative of the Superhero Pope is the pope as ultimate overlord. This is the pope of anti-Catholicism, the mysterious apocalyptic bogeyman who wants world domination through thought control.

But sometimes Catholics long to think of him that way too.

“The task of giving an authentic interpretation of the deposit of faith has been entrusted to the living teaching office of the Church alone, that is, to the successor of Peter, the Bishop of Rome, and to the bishops in communion with him,” says the Compendium of the Catechism.

The pope is the rock Jesus said he would be; ground zero for the defense of the faith.

But his task isn’t to impose the truth on Catholics (and, where possible, the rest of the world)—it’s a negative power, a protection from error.

The issue of those who are divorced and remarried without an annulment is a perfect example.

Looked at from one perspective, Pope Francis was trying to change the teaching of the Church by manipulating the synodal process and has only barely failed (so far). Seen from another way, he was raising a key misunderstood issue of our time, and in such a way that the synod would publicly test it and learn to profess it more strongly.

In either case, he is acting as pope, not overlord, and the negative charism of the papacy is working—not as an organization dominated by a strongman but as a Church guided by grace.

Which brings us back to today’s feast day:

By celebrating the pope’s Basilica instead of his personality, and then later emphasizing the point by zeroing in on his chair, the Church is saying loud and clearly: the papacy is an office, not a man.

The Church wasn’t built on the singular gifts of Simon, son of Jonah; it was built on Peter, the rock Christ created, named and claimed.

Peter wasn’t a master manager and theologian. On Peter the manager, Jesus says, “I have prayed that your own faith may not fail so you can strengthen your brothers.” The theological motto of Peter the theologian is also negative: “Master, to whom shall we go?”

As Pope Francis put it at synod’s end: “The Church is Christ’s—she is his bride—and all the bishops, in communion with the Successor of Peter, have the task and the duty of guarding her and serving her, not as masters but as servants.” Amen.

Tom Hoopes is writer in residence at Benedictine College.