The Klan and the Catholics 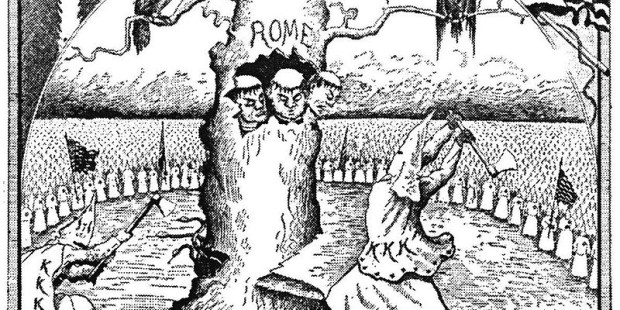 The history of the KKK tells us something about ability of immigrants in the United States to assimilate over time.

There is currently a good deal of nervousness under those white hoods. The “hacktivist” group Anonymous has declared its intention to reveal the identities of around a thousand Klan members in the US, threatening to expose many clandestine racist militants. Who knows but that this measure might not finally kill off that once formidable White Giant?

But focusing on the racist element makes us forget another, critical, aspect of Klan history, and one profoundly relevant to religious believers. Yes, the Klan was always centrally concerned with suppressing African Americans and enforcing White supremacy. But at its height of strength and popularity, during the 1920s, it attracted several million followers in the US, most of whom were at least as concerned with fighting Roman Catholics. For a few heady years the movement enjoyed its greatest successes in northern industrial states like Pennsylvania and Indiana, rather than the Deep South, and much of its appeal lay in its anti-Catholicism.

Twenty years ago I had the good fortune to use the internal archives of the Pennsylvania Klan from this era, which I discussed in my 1997 book, Hoods and Shirts. During the 1920s the Klan gained more than five million members nationwide, and its Pennsylvania membership alone is credibly estimated as at least a quarter of a million. Pennsylvania became a Realm of the Klan, under its Grand Dragon, and was further divided into eight provinces, each under a Great Titan. The state acquired no fewer than 423 klaverns, or lodges. In the mid-1920s the Klan made frequent appearances in the Pennsylvania newspapers, both for their regular parades and mass rituals, and for increasingly frequent acts of violence and confrontation.

Aggressive Klan demonstrations and anti-Catholic protests led to conflict with Catholic groups, and in 1923 and 1924 riots led to bloodshed in the industrial towns of Carnegie, Scottdale and Lilly. One such fight gave the Klan a celebrated hero in Tom Abbott, the “martyred Klansman” of pamphlet and legend. In response to the continuing violence, the Klan formed a paramilitary corps of klavaliers, or storm troopers, and we actually have the application forms that true believers submitted for this terrifying group.

Partly, the Klan inherited the very powerful nineteenth tradition of militant anti-Catholic bigotry, which presented the church as a vehicle for tyranny, paganism, immorality, persecution and every anti-Christian force. The Klan rehearsed the ancient charges of American nativism about Catholic evils, including the Inquisition, the seditious secret oaths taken by the Knights of Columbus, and the conspiratorial nature of the Jesuit order. So much was familiar—but from the 1890s the US experienced a mass immigration largely derived from Eastern and Central Europe, and newer groups were heavily Catholic and Jewish in character.

In the Klan view, surging Catholic power threatened to overwhelm American society and values. In the previous century, the Church in the United States had grown from fifty thousand adherents and 35 priests to twenty million faithful with a vast network of clergy, schools and seminaries. Catholic strength was founded on “Alienism,” “the unassimilated hordes of Europe,” which threatened American racial purity. The nightmare was that all Americans would someday be subjected to Catholic tyranny, and that a Catholic would someday attain the presidency. The 1928 presidential campaign of Catholic Al Smith galvanized the Klan afresh.

In that same year of 1928 Pennsylvania Klan leader Paul Winter warned in his What Price Tolerance? that an apocalyptic struggle would soon commence between “traditional Americanism and the religious and political invasion of the United States by the champions of European institutions and ideals.” “America’s Armageddon” would be physical as well as moral, as Catholics had so often showed themselves the masters of subversion and conspiracy. Was a Catholic coup imminent? Against the clear and present danger facing the republic, Winter declared that patriotic forces were stirring. These included those faithful Protestant clergy untainted by ecumenical temptations, and the network of fraternal and patriotic orders, most powerfully the Freemasons. Klan organization was heavily based on Freemasonry.

The Klan was above all a Protestant movement, whose events were accompanied by beloved hymns like “Onward Christian Soldiers,” but its trademark anthem was “The Old Rugged Cross.” Protestant clergy were prominent in the leadership of this “crusade,” “consecrated beneath the fiery cross of militant Protestant Christianity.” Every lodge had its kleagle or chaplain, who was always a Protestant minister.

The Pennsylvania Klan soon burned itself out, and the national organization collapsed among charges of crime and corruption. The state organization lingered into the 1940s, but as a tiny marginal sect. Only in the 1950s did the Southern Klans reform, to fight desegregation.

Looking back on the movement today, two points strike us most forcefully. One is the near-total oblivion that has overcome the religious element, so that even Klan leaders themselves today recruit Catholics, and deny that the Klan ever felt differently. How could something as fundamental as that ever be forgotten?

But perhaps the answer lies in the second point, namely how rapidly and totally immigrants (and their faiths) become assimilated into American life. Today, we scoff at the charges the Klan made against the Catholic or Jewish newcomers, and how they declared that such alien populations as Poles and Irish, Slovaks and Italians could never become truly American. A generation or two later, those immigrant families had themselves become hyper-American, so that even the Klan could not fault their devoted patriotism. Dare we hope that another few decades will throw our current immigration debates into a similar light, and make us ask what on earth we were so bothered about back in 2015?

Philip Jenkins is a Distinguished Professor of History at Baylor University and author of The Many Faces of Christ: The Thousand-Year Story of the Survival and Influence of the Lost Gospels
(New York: Basic Books 2015).