Pope Francis to Parents: Take the Smartphones off the Dinner Table 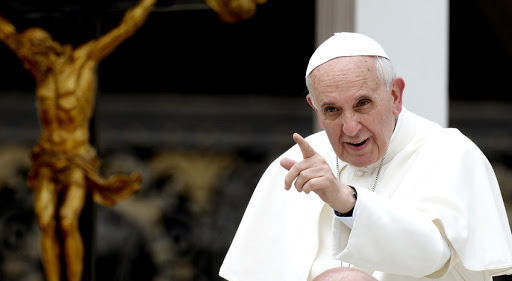 VATICAN CITY — Pope Francis has advised parents not to allow smartphones at the dinner table, to help restore a sense of family togetherness and to teach their children about the importance of relationships.

In his weekly catechesis in St. Peter’s Square, the pope said that family togetherness is “a sure thermometer for measuring the health of relationships.”

“If something isn’t going well in a family, or if there’s some hidden wound, it immediately becomes clear at the dinner table. A family that almost never eats together or that, rather than talking at table, watches television or looks at the smartphone, is not much of a family. When the children are attached to the computer and the telephone at the table, and don’t listen to one another, this isn’t family, it’s a hostel!”

While the pope acknowledged that today’s world poses many obstacles to family togetherness, he said that “we have to find a way to recover it.” And one place to start is the dinner table.

“At the table we talk, at the table we listen,” he said. “No more silence, that silence that isn’t the silence of nuns but the silence of selfishness, where everyone does his own thing, or is on the television or computer … and they don’t talk. No, no silence. We need to recover family togetherness while adapting it to the times.”

During his general audience catechesis, Pope Francis also spoke about the importance of Catholic families attending Holy Mass together; he called on mothers and fathers to care for and protect all children, not just their own; and he took to task Western advertisers that promote an obsession with snacks and sweets while so many people in the world are starving, in body and soul.

The pope highlighted the Eucharist, which he said becomes a “school of human inclusion” and reminds us that our bread is meant to be shared with all.

He concluded that “no division can withstand” the Eucharistic banquet. He added that by cooperating with the grace of the Eucharist, “ever new communion” can be created through the power of the Sacrament that “includes and saves.”

Here below we publish a full English translation of the pope’s catechesis.

Good morning. Today we reflect on a characteristic of family life that we learn from the first years of life: togetherness (i.e., the attitude of sharing the goods of life and being happy to do so). Sharing and being able to share is a precious virtue. Its symbol, its “icon,” is the family gathered around the dinner table. The sharing of a meal—and beyond the food, sharing affections, stories and events—is a fundamental experience. When there is a celebration, a birthday, an anniversary, we meet around the table. In some cultures it is customary to do so for a death, to be close to those in sorrow over the loss of a family member.

Togetherness is a sure thermometer for measuring the health of relationships: if something isn’t going well in a family, or if there’s some hidden wound, it’s immediately clear at the table. A family that almost never eats together, or that, rather than talking at table watches television or looks at the smartphone, is “not much of a family.” When the children are attached to the computer and the telephone at the table, and don’t listen to one another, this isn’t family, it’s a hostel!

Christianity has a special vocation to togetherness, as everyone knows. The Lord Jesus gladly taught at table, and sometimes represents the kingdom of God as a festive banquet. Jesus also chose a meal to hand on his spiritual testament to his disciples—he did it at supper—summed up in the memorial act of his sacrifice: the gift of his Body and his Blood as the food and drink of salvation which nourishes true and lasting love.

In this perspective we can rightly say that the family is “like one of the family” at Mass, because it brings to the Eucharist it’s own experience of togetherness, and opens it to the grace of universal togetherness, of God’s love for the world. In participating at the Eucharistic celebration, the family is purified from the temptation to turn in on itself, fortified in love and fidelity, and extends the reach of its fraternity according to the heart of Christ.

In our own times, marked by so much closure and too many walls, togetherness created by the family and expanded by the Eucharist, becomes a crucial opportunity. The Eucharist and families nourished by it can overcome closing in and build bridges of welcome and charity. Yes, the Eucharistic celebration in a Church of families that are capable of restoring to the community the active leaven of togetherness and mutual hospitality, is a school of human inclusion second to none. There is no little one or orphaned, weak, defenseless, wounded and disappointed, desperate and abandoned ones who the Eucharistic togetherness of families cannot nourish, refresh, protect and welcome.

The memory of the family virtues helps us to understand. We ourselves have known and still know what miracles can happen when a mother looks after and pays attention, nurtures and cares for other people’s children, as well as her own. Until recently, one mother was enough for all the children in the backyard. And again: we know well what strength a people gains when fathers are ready to protect everyone’s children, because they consider their children an undivided good that they are happy and proud to protect.

Today, many social contexts pose obstacles to family togetherness. It’s true, today it’s not easy. We must find a way to recover it. At the table we talk, at the table we listen. No more silence, that silence that isn’t the silence of nuns, but the silence of selfishness, where everyone does his own thing, or is on the television or computer … and they don’t talk. No, no silence. We need to recover family togetherness while adapting it to the times.

Togetherness seems to have become something that is bought and sold, but in this way it’s something else. And food isn’t always the symbol of a just sharing of goods capable of reaching those who have neither food nor affection. In wealthy countries, we are led to wantonly spend on food, and then we are led to do so to remedy the excess. And this senseless “business affair” diverts our attention from the real hunger of body and soul. When there’s no togetherness, there is selfishness; everyone thinks about himself. Especially as advertising has reduced it to a peckishness for snacks and a desire for sweets, while so many—too many brothers and sisters —are without food. It’s somewhat shameful.

Let us look to the mystery of the Eucharistic banquet. The Lord breaks his body and sheds his blood for all. Truly there is no division that can withstand this sacrifice of communion; only an attitude of falsehood, of complicity with evil can exclude one from it. Any other distance cannot withstand the defenseless power of this broken bread and this wine outpoured, the Sacrament of the one Body of the Lord. The living and vital covenant of Christian families which precedes, supports and embraces, in the dynamism of their hospitality, the hardships and joys of daily life, cooperates with the grace of the Eucharist, which is able to create ever new communion through its power that includes and saves.

The Christian family will thus manifest the breadth of its true horizon, which is the horizon of Church as a Mother of all men, of all the abandoned and excluded, among all peoples. Let us pray that this family togetherness may grow and mature in the time of grace of the next Jubilee of Mercy.