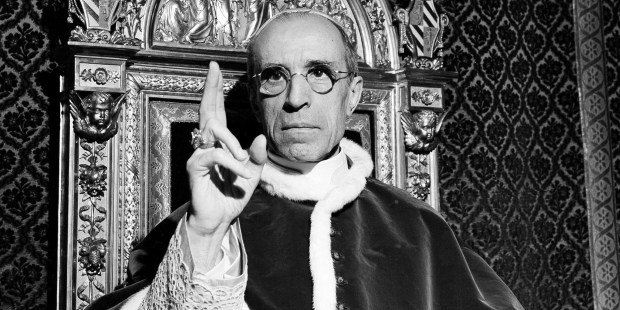 Mark Riebling’s “Church of Spies” brings us closer to understanding

There is more to Pope Pius XII than his silence when facing Nazi atrocities in the Jewish Shoah. But if it is enough to make him a saint is open to question. The cause for Pius XII’s beatification (the last step to canonization) presently is stalled.

Pope Francis cites the lack of a miracle or two, which may or may not be a convenient dodge, for he has been flexible on what it takes to make a saint. Typically two miracles must be attributed to the candidate, but Francis waived the required second miracle to canonize John XXIII and, recently, Junipero Serra.

But John XXIII was not burdened by lingering suspicions over his failure to protect Jews during World War II. Pius XII is.

Pius’ pontificate of silence hurt Jewish-Christian relations. Arguably, it cost lives (though speaking out would have cost more). Yet in the face of the deepest moral crisis the western world ever confronted, Pius outwardly chose silence. His possible canonization indeed is a controversy.

Pius did not start out quiet. His first encyclical, Summi Pontificatus (known in English as Darkness over the Earth) promulgated in October 1939, seemingly promised great energy. According to Mark Riebling’s Church of Spies: The Pope’s Secret War against Hitler, it was regarded at the time, as an attack on Nazi Germany. It won praise from the New York Times, Riebling says, and the Jewish Telegraphic Agency said of it, “few observers had expected so outspoken a document.”

Who among “the Soldiers of Christ”—ecclesiastic or layman—does not feel himself incited and spurred on to a greater vigilance, to a more determined resistance, by the sight of the ever-increasing host of Christ’s enemies … as he perceives them wantonly break the Tables of God’s Commandments to substitute other tables and other standards stripped of the ethical content of the Revelation on Sinai … (Paragraph 7).

He followed in the next paragraph with a lament for the “harvest of desertions” by those Christians—“unfortunately more in name than in fact”—who “in the hour that called for endurance, for effort, for suffering, for a stout heart in face of hidden or open persecution, fell victims of cowardice, weakness, uncertainty; who, terror-stricken before the sacrifices entailed by a profession of their Christian Faith, could not steel themselves to drink the bitter chalice awaiting those faithful to Christ.”

Strong, stirring stuff. Yet thereafter Pius lapsed into his silence and, as Riebling remarks, never again uttered the word “Jew” until 1945.

Riebling’s book, though, is not about the silent pope. It is about Pius’ war against Hitler through an extensive and relatively unknown-to-history spy network that reported in and out of the Vatican, sometimes directly to Pius. It is also about the crucial but clandestine encouragement the Vatican gave to German anti-Nazis. Bluntly, Pius sought Hitler’s death or his overthrow. The pope decided to eliminate Nazism by eliminating Hitler.

The attempted assassinations missed by mere happenstance, by fractions of moments sparing Hitler. A planned military coup before the invasion of France was hampered first by military demands, seeking from London “an honorable” peace that incidentally included German retention of occupied Austria. Pius was to relay the offers to London and vouch for the sincerity of the plotters. And so it went, first this plot, then another, until the war ended, the papacy half expecting to play the part of a mediator between Germany and the Allies once Hitler was gone.

But there was no guarantee for Pius or the Allies that the plotters could overthrow the government, whether by coup or assassination, or that the new regime would prove any more reliable than Hitler’s if they did succeed. Yet, “Pius proceeded as if he believed in the plotters.”

The men who plotted against Hitler were brave, unquestionably, and prepared each to give their lives for a “decent Germany” if required. Many if not most of them did die for betraying Hitler. But, the impression grows, they were also clumsy.

Riebling spends little time as Pius’ apologist for the papal silence, except to repeat what has been said before: a papal frontal attack on Hitler would have resulted in greater persecution of the Catholic Church and the Jews it did seek to shelter.

The pope, in Riebling’s telling, took his advice from the plotters themselves. They, and even Allied diplomats, advised the pope to “stand aside while the German hierarchy carried out the struggle against the Nazis inside Germany.”

It was also pointed out that Pius could hardly condemn the Nazis without also condemning the Soviet Union for much of the same violence. “The British worried about upsetting Stalin” because, they fretted, exposing some atrocities might expose others, like the Soviet murder of 22,000 captured Polish officers in the Katyn Forest.

Riebling’s summary of the pope’s role: “Buffeted by shifting pressures from all sides, Pius did not so much keep above the fray as work below it.”

But without any effect at all.

The time was not a time for diplomacy as usual, for spy meetings and exchanges of confidential notes delivered by secret messengers. The undercover efforts of the Vatican should have been exerted in smuggling priests out of Poland and Germany, where the Nazis were most furious against the Church, and in relentlessly exposing the ongoing extermination of the Jews in such a way as no Allied government could ignore.

And if the Nazis stormed the Vatican and martyred the pope, his saintliness today would be less enigmatic, but Church of Spies is well worth reading for the fascinating story.

Russell E. Saltzman is a web columnist at First Things magazine and lives in Kansas City, Missouri. He can be reached russell.e.saltzman@gmail.com.