A Culture of Theology in the University 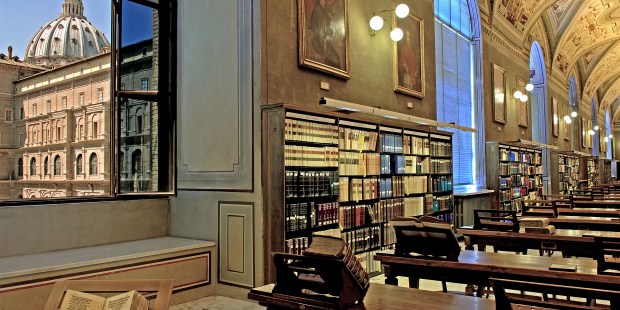 BIBLIOTECA APOSTOLICA VATICANA / AFP
This handout picture released by the Vatican press office on December 3, 2013 shows a room of the Vatican library (Biblioteca Apostolica Vaticana). The Bodleian Libraries of the University of Oxford and the Biblioteca Apostolica Vaticana (Vatican Library) have joined efforts in a landmark digitization project with the aim of opening up their repositories of ancient texts. Over the course of the next four years, 1.5 million pages from their remarkable collections will be made freely available online to researchers and to the general public.The website launched on December 3, 2013 with funding from the Polonsky Foundation includes the first results of the four-year project, including the Bodleian's 1455 Gutenberg Bible, one of only 50 surviving copies of the first major book printed in the west with metal type.
RESTRICTED TO EDITORIAL USE - MANDATORY CREDIT "AFP PHOTO / BIBLIOTECA APOSTOLICA VATICANA " - NO MARKETING NO ADVERTISING CAMPAIGNS - DISTRIBUTED AS A SERVICE TO CLIENTS
Share
Print
Tim Muldoon - published on 11/12/15

Theology is not dead … but it doesn’t feel happy

Recently in my Capstone senior seminar I made the observation that we use the same word culture to refer to both the contents of a Petri dish and the social factors that contribute to a community’s sense of itself. Both meanings of culture refer to growth and well-being. Both a Petri dish, where cells are cultured, and a university, where young people are cultured, provide nutrients and other resources that aid growth.

That image of a Petri dish is helpful in considering the larger questions about the culture of Catholicism, and the role of theologians in promoting it at the university level. The question of the “culturing” role of theology was in the background of the recent back-and-forth between theologians and Ross Douthat of the New York Times (see below for the timeline), and raises questions for what that role means today. These questions are about what theology is, what Catholic tradition is, and how Catholic universities ought to teach theology in ways that culture students. These questions have to do with the way theology can shape a culture, and the way that a culture can shape theology.

The university is, after all, a culture, a place where young people hopefully grow more and more into adults, and a place where adults hopefully grow more and more in knowledge and wisdom. At the crosshairs of this question about university culture is whether theology ought to have any place in it. Newman’s famous argument was that theology, inasmuch as it constitutes a branch of knowledge, had to be part of any institution that sought universal knowledge. (I tend to be sympathetic to Newman’s argument, but I am, after all, a theologian.)

But this is not the late 19th century. Claims to universal knowledge today, especially within a core curriculum, sound to many liberal ears like claims to power over a culture, with all the attendant questions of who doesn’t hold the power and is therefore relegated to second- or third-class status. The conservative response tends to be something like this: throwing out the bathwater of claims for universal knowledge and you end up throwing out the baby of basic formation in virtues like honesty, diligence, generosity, and the like. Without some form of culture, nothing grows. Theology belongs in the university because at minimum, it’s a way of understanding the history of Europe and the wider Christian world from the inside out, by crawling inside the minds of those who helped create that history.

What is depressing to me is that the banishment of theology from universities—a history aptly chronicled by the likes of George Marsden, Mark Schwehn, and James Tunstead Burtchaell, among others—has both impoverished theology itself and, perhaps more importantly, impoverished academic life as a whole. For whereas good theology always invites questions that transcend disciplinary methodologies, impoverished theology either hunkers down in isolated methods leading to hyperspecialization and academic silos, or it slides into methods that garner greater respect in the academy, like those of the social sciences.

We Catholic theologians have had to face an uphill climb in the academy for the past few generations, trying to both master our craft and, at the same time, to find time to make the case that we actually belong in a modern university. It doesn’t help matters much that during this same period, our Church has wrestled with its own identity crises, now played out in real time over Twitter.

So on the one hand, I sympathize with those who signed the letter to the New York Times, several of whom are conversation partners and friends. Douthat is a smart guy, and yes, his job is to provoke. But those of us that have done lots of homework—who can comment on (for example) how Hincmar of Reims impacted the Church’s understanding of marriage in the 9th century, or how Gratian sought a compromise between Frankish and Germanic marriage practices in the 12th, or how the revision of Catholic Canon law on marriage was impacted by 20th century personalism as exemplified by Dietrich von Hildebrand and others, or how St. John Paul II was schooled in that personalism, giving rise among other things to his Theology of the Body—well, we can provide a little more context for what’s unfolding in the Church’s discernment about marriage than a columnist can. And I sympathize with the concern that, in light of academic marginalization, theologians have to demonstrate that yes, theology is a form of knowledge, even if there are many who just don’t like any discipline that has to do with God.

On the other hand the letter was over the top. Was Douthat’s column really the most upsetting thing the New York Times has published in recent memory? Is his call for preserving the Church’s doctrine and pastoral practice on marriage—a doctrine that emerged over centuries, being the last of the seven sacraments to be officially designated as such, in the 14th century—so unfit for intelligent reflection as to warrant this kind of attention? Is calling someone to “own [his] heresy” amidst the Twitter version of road rage sufficient warrant for calling for an employer to discipline a writer?

Let me be clear: I do not agree with Douthat’s position because I think he fails to take the long view of the Church’s centuries-long discernment about marriage. Nor do I agree with the letter writers’ supercilious tone toward Douthat; I am perplexed that of the many ridiculous things that the New York Times publishes about the Catholic Church, this column was the one that elicited such feedback. What interests me most is what this unfortunate chapter says about theology in the public square. Will it too fall prey to the balkanization of discourse?

What I see in these reflections on theology and the university are two corresponding directions of argument. The first, espoused by Douthat, is concerned about the erosion of theology as a cornerstone of the Catholic intellectual tradition, which Robert Hutchins, the former president of the University of Chicago, once called “the longest intellectual tradition of any institution in the contemporary world.” Douthat is concerned (as am I) that when Catholic theology tries to catch up to the zeitgeist, that means that the zeitgeist becomes God. The vox populi is decidedly not vox dei. What that view misses, I think, is the reality that behind the zeitgeist are too often culture-shapers whose objectives are questionable and whose conclusions are rather far from what Jesus meant by “the kingdom of God.”

The second direction, espoused by the theologians, relies on the very real maturation of Christian doctrine first explored by Newman. Theologians, myself included, are concerned when Christian doctrine as expressed, say, in canon law or the catechism becomes the only word in a Roma locuta; causa finita est sense. In the case of marriage, for example, any theologian worth his or her salt knows that both canon law and the catechetical treatments of marriage were not the same in the eighth century as they are in the twenty-first (or even the beginning of the twentieth, before the revision of canon law under John Paul II). Doctrine does mature in response to pastoral need, as it did in the Roman era, the medieval era, the post-Reformation era, and the modern era. The only difference is that now everyone sees what Bishop Robert Barron describes as the “sausage making” process of ecclesial discernment. We’ve all become armchair bishops.

What this comparatively minor chapter in the recent history suggests to me is the need for clarifying and deepening the role of theology at Catholic universities. What real theology can do—not religious studies, not ethics, not philosophy of religion—but rather hard questions about what God says and does, or at least how people have understood those questions over the Church’s history—can provide a framework of imagination of a world that elicits wonder, love, and even intellectual conversion. I am very persuaded by chemist/philosopher Michael Polanyi’s observation: that like science, Christian worship provides a heuristic—a “framework of clues which are apt to induce a passionate search for God,” wherein the word “God” refers to the “direction toward which wonder progresses,” in the words of Michael Buckley. There has always been a close relationship between theology and learning in general; that relationship gave rise to schools and universities in the first place.

But before there is theology, there must be faith. Saint Anselm proposed two ideas relevant to us today: the first is that theology is faith seeking understanding; the second is the ontological argument that God is “that than which nothing greater can be conceived.” When we root our God-words (theos-logos) in the experience of faith—the phenomenon of wonder towards the world, the mysteries of ourselves, the power of love, the grotesqueness of suffering, and so on—we can draw from the often sublime reflection of theologians ancient and new. In doing so we aim for the “ever greater one,” to cite the poet Rainer Maria Rilke.

Yes, at Catholic universities our theology ought to be Catholic. That reality is a reflection of both the academic freedom of Catholic theologians, as well as the institutional autonomy of Catholic universities. We cannot be all things to all people. But recognize that in doing Catholic theology we are not being bad neighbors: like Aquinas, we will be happy to enter conversation with Jewish and Muslim theologians; today we will also engage with Buddhists and Hindus, Marxists and libertarians, anatheists and many others. We will never shy away from a good conversation. We will rather recognize that in promoting Catholic theology, our contribution to the world of ideas will be an invitation to inhabit the heuristic of an intellectual tradition that is both ancient and new, one which emphasizes, in the words of my colleague Michael Himes, that the “least wrong way” to speak about God is to speak about love. It is to enter a conversation that is thousands of years old, but requires of the participant understanding of a rich vocabulary that takes years to master. It is to enter a culture of theology.

Tim Muldoon is a Catholic theologian of the New Evangelization; author/editor of nine books; and editor of the journal Integritas: Advancing the Mission of Catholic Higher Education at Boston College. He blogs and tweets on Catholic higher education and the Catholic university.