Pope Francis Donates Crucifix Given to Him by Raul Castro 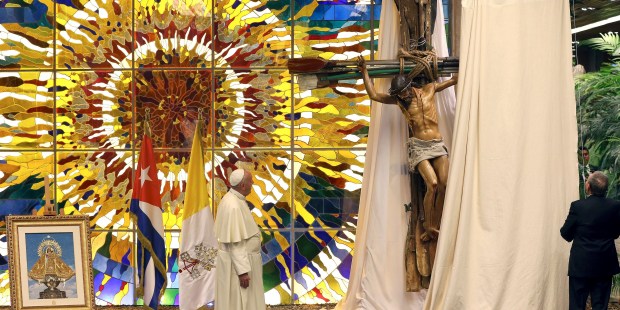 ALEJANDRO ERNESTO / POOL / AFP
Pope Francis (L) and Cuban President Raul Castro (R) look at a Christ in a cross during a meeting in which they exchanged presents at Revolution Palace in Havana on September 20, 2015. Pope Francis met Sunday with Fidel and Raul Castro, the brothers who have ruled Cuba since its 1959 revolution, after celebrating an outdoor mass attended by hundreds of thousands. AFP PHOTO / POOL - Alejandro Ernesto
Share
Print
Aleteia - published on 11/13/15

Lampedusa, the new home to the cross, was the first place in Italy Pope Francis visited after his election

VATICAN CITY — Pope Francis is donating to the parish church of Lampedusa a crucifix given to him by President Raul Castro of Cuba during the recent papal visit to the Caribbean island.

Measuring almost ten feet high, the crucifix is crafted from wooden oars tied with ropes to symbolize the reality of migrants who have crossed the Mediterranean by boat.

Lampedusa is an island off the coast of Sicily whose shores receive the majority of migrants and refugees crossing the Mediterranean Sea by boat from Libya to Italy. The tiny island was also the first place in Italy Pope Francis chose to visit after his election.

Pope Francis said to the people of Lampedusa during that visit: “Immigrants dying at sea, in boats which were vehicles of hope and became vehicles of death. That is how the headlines put it. When I first heard of this tragedy … and realized that it happens all too frequently, it has constantly come back to me like a painful thorn in my heart. … Please, let it not be repeated!”

Pope Francis’ decision was announced by Cardinal Francesco Montenegro of Agrigento whose archdiocese includes Lampedusa. He made the announcement at Italy’s National Ecclesial Congress in Florence that was attended by the pope on Tuesday.

On hearing of the pope’s gift, the parish priest of Lampedusa Don Mimmo Zambito said the image of this crucifix symbolizes the mercy and humanity of Jesus Christ who triumphs over every conflict, knocking down walls and crossing borders.

The crucifix will be displayed in the Church of the Holy Cross in Agrigento for the local inauguration of the Jubilee Year of Mercy on December 11 and then will be taken on a pilgrimage across the archdiocese of Agrigento before taking up its final residence in the parish church of Lampedusa.