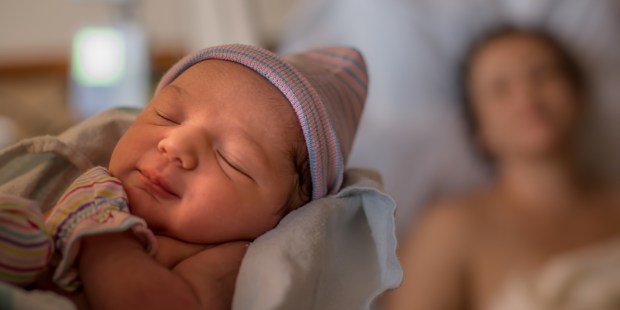 “I crave that experience,” says a woman born without a womb. “I want the morning sickness, the backaches, the feet swelling. I want to feel the baby move.”

Science has been able to do a lot for women unable to have children naturally. Test tube babies are now common, though the procedure is still very expensive.

Now, doctors in the United States are confident they will be the first in this country to help women have a child even if they never had one essential element—a womb. Surgeons at the Cleveland Clinic are expecting to perform uterus transplants within the next six months.

In reporting the development, The New York Times said that an estimated 50,000 women in the United States might be candidates. They include women who were born with ovaries but no uterus, a syndrome that affects about one in 4,500 newborn girls, or women who had to have their uterus removed.

Eight women from around the country have begun the screening process at the Cleveland Clinic, hoping to be selected for transplants. One, a 26-year-old with two adopted children, said she still wanted a chance to become pregnant and give birth.

“I crave that experience,” she said. “I want the morning sickness, the backaches, the feet swelling. I want to feel the baby move. That is something I’ve wanted for as long as I can remember.”

Dr. Andreas G. Tzakis, director of solid organ transplant surgery at a Cleveland Clinic hospital in Weston, Fla., is the driving force behind the project. “There are women who won’t adopt or have surrogates, for reasons that are personal, cultural or religious.” Dr. Tzakis told The Times.

The hospital plans to perform the procedure 10 times, as an experiment, and then decide whether to continue. Dr. Tzakis said he hoped to eventually make the operation readily available in the United States.

While a prospective uterus transplant would be a first in the US, it has already led to live births in Sweden. To prepare for the surgery, Tzakis, 65, spent time with a team which has already performed nine such transplants at the University of Gothenburg.

Needless to say, the surgery won’t be a walk in the park, either for doctors or recipients. After a thorough screening process, the prospective organ recipient will be given hormones to stimulate her ovaries to produce 10 eggs (because the fallopian tubes will not be connected to the transplanted uterus, a natural pregnancy will be impossible). Doctors will fertilize the harvested eggs with her partner’s sperm and freeze them. Once there are 10 embryos in the freezer, the woman will be put on the waiting list for a transplant.

While the Swedish team did the transplant with live donors, the Cleveland Clinic has opted to avoid the complications involved in the highly delicate procedure of removing a uterus and keeping other bodily functions undisturbed. Cleveland Clinic uterus recipients will have to wait for a donor with matching blood and tissue type to die, as is the case with transplants of vital organs.

The woman will wait one year to heal from the surgery and adjust the doses of anti-rejection medicine before trying to become pregnant.

Then doctors will implant one embryo at a time in the uterus, until the recipient becomes pregnant. The baby will be delivered by cesarean section before the due date, to protect the transplanted uterus from the strain of labor.

After giving birth, the mother can either keep the uterus so she can try to have one more baby (two is the limit, for safety reasons), or have it removed so she can stop taking the anti-rejection drugs. If she does not want to have surgery to have it removed, doctors said it may be possible to quit the drugs and let the immune system reject the uterus, which should then gradually wither away.

So of the 10 embryos that were created in vitro, if the first two implanted lead to live births, the other eight are left to the fate of the millions who are already in frozen storage as the result of in vitro procedures.

In addition, the Times pointed out, the pregnancies will be considered high-risk, with fetuses exposed to anti-rejection drugs.

Tzakis said women who take anti-rejection drugs for other organ transplants are more likely than others to have preeclampsia, a complication of pregnancy involving high blood pressure, and their babies tend to be smaller. But it is not known whether those problems are caused by the drugs, or by the underlying illnesses that led to the transplants.

Yet when the Times asked questions about the ethics of the procedure, it focused on other considerations. Tzakis described transplantation as ethically superior to surrogacy. “You create a class of people who rent their uterus, rent their body, for reproduction,” he said of surrogacy. “It has some gravity. It possibly exploits poor women.”

And there is at least one other “brave new world” element to the new field, as the Times reported:

The Swedish team used live donors, and showed that a uterus from a woman past menopause, transplanted into a young recipient, can still carry a pregnancy. In five cases, the donor was the recipient’s mother, which raised the dizzying possibility of a woman giving birth from the same womb that produced her.

Dr. Alan Lichtin, the chairman of the clinic’s 15-member ethics board that evaluates research projects, said the medical team and the board went back and forth many times, and it took about a year to produce a plan that the board could approve. The final vote was overwhelmingly in favor of the project.

“I think our initial impression was: ‘Wow. This is really pushing the envelope,’” Dr. Lichtin said. “But this is the way human progress occurs.”

Other hospitals, in the United States and in Britain, are also preparing to try the surgery but are not as close as the team in Cleveland is.

On in vitro fertilization, the Catechism of the Catholic church says the following:

2377 Techniques involving only the married couple (homologous artificial insemination and fertilization) are perhaps less reprehensible, yet remain morally unacceptable. They dissociate the sexual act from the procreative act. The act which brings the child into existence is no longer an act by which two persons give themselves to one another, but one that “entrusts the life and identity of the embryo into the power of doctors and biologists and establishes the domination of technology over the origin and destiny of the human person. Such a relationship of domination is in itself contrary to the dignity and equality that must be common to parents and children.” “Under the moral aspect procreation is deprived of its proper perfection when it is not willed as the fruit of the conjugal act, that is to say, of the specific act of the spouses’ union . . . . Only respect for the link between the meanings of the conjugal act and respect for the unity of the human being make possible procreation in conformity with the dignity of the person.”

Clearly Catholic bio-ethicists have something new to consider.