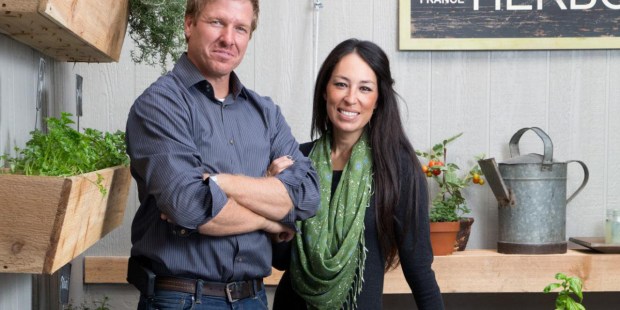 The faith and family of Chip and Joanna Gaines

So many of us have a love-hate relationship with TV. We’d enjoy finding something to fill an hour or two with some down time, but the majority of what’s broadcast is simply unwatchable.

My own battle started in earnest when I had my first child. Too tired to read, I wanted something to hold my interest for those late nights of nursing, without feeling like I needed to go to confession the next day. (I heartily recommend avoiding Russian Yeti for late-night television—definitely not something that is going to induce sleep.) So HGTV has become a perennial go-to. And I’m not alone in this—my pastor declared the same thing in this week’s homily.

HGTV, unfortunately, doesn’t have a sterling reputation. Last year, caving to social-media outrage, the channel fired the Bentham brothers because of their outspoken position against gay marriage, divorce and abortion. The brothers’ show was pulled midway through taping of the first season.

There is, however, one program that hasn’t caved to the culture wars: Fixer Upper (shhhh, no one tell HGTV). As the name implies, it’s about renovating homes that are in less-than-ideal shape. A married couple, Chip and Joanna Gaines, serves as the realtors, contractors and interior designers. The hour-long program goes through the process of a family selecting, renovating and decorating a new home in the greater Waco, Texas, area.

Fixer Upper, entering its third season later this fall (rumor has it on Dec. 1) has become one of the channel’s most popular programs. So what makes Fixer Upper different from most DIY (do it yourself) programming?

1. They are happily married

TV programming likes to feature strong women, but with a catch: She has to be condescending to her husband. Joanna is exactly the opposite, always voicing her admiration for her husband’s gifts and abilities. Chip, on the other hand, truly encourages and supports his wife’s dreams while keeping everyone laughing.

2. They have four kids

There are four children in the Gaines family. Anyone who has four or more children knows well the prejudice against big families. So to feature a large family that seems to be flourishing is truly an anomaly.

Far from shuttling their kids from one caretaker to the next, Chip and Joanna are clearly taking their parenting seriously. Joanna closed down the store they started after they were married because it interrupted her ability to care for her toddlers.

And with 60 animals spread out over 40 acres, these kids aren’t bored, even though their home doesn’t have a TV.

In one episode Chip and the children are raising the newly finished sign to the entrance of their farm. Once it is up, Chip tells that children, “Momma would want us to say a prayer.” And then they say the Our Father together. When was the last time you saw anyone say an Our Father on secular TV?

Joanna Gaines recently produced a video for a Palm Sunday service at Baylor University talking about her own journey of faith and the ways God has directed her steps throughout her life and made her dreams become a reality.

Of course no discussion of Fixer Upper would be complete without mention of the amazing work this couple does in transforming homes. As Catholics we know the essential importance of the via pulchritudinis, the way of beauty. The Gaines, using experience and vision, bring the beautiful into these homes that start out as dated (shag carpet, popcorn ceilings) and transform them into something beyond the new residents’ imaginings. Their renovations point to, in a little way, that which God wants to do with us if we let him.

All of this could, of course, go up in smoke. We have all seen fame and fortune dramatically change people. We pray for the Gaines’s sake (and ours) that they keep doing what they already do so well.

People are hungry for programming that not only doesn’t assault the senses, but also leaves us feeling edified. Perhaps HGTV, by recognizing that a happy, healthy, God-fearing family is at the heart of Fixer Upper’s popularity, will produce more like it.

Carrie Gress has a doctorate in philosophy from the Catholic University of America and was the Rome Bureau Chief of Zenit’s English Edition. She is the author of Nudging Conversions: A Practical Guide to Bringing Those You Love Back to the Church and co-author with George Weigel of City of Saints: A Pilgrim’s Guide to John Paul II’s Krakow. A mother of four, she and her family live in Virginia.