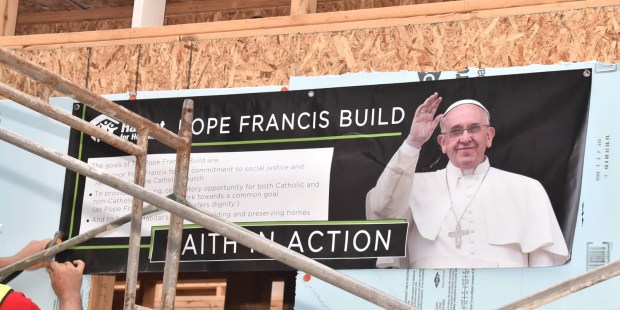 Supplied Photo
Share
Print
Kathy Schiffer - published on 11/16/15
With hammers and nails, ladders and levels, volunteers from five Catholic parishes in metropolitan Detroit came together August 15–22, 2015, to erect a new home for a family in need. Called Pope Francis House, the home, located on Buckingham Drive in Detroit’s MorningSide community, is part of Habitat for Humanity Detroit’s 2015 “Blitz Build.”

Tara Franey, interim executive director of Habitat for Humanity Detroit, explained that the project was funded by an anonymous donor who contributed $60,000 toward the cost of materials. The donor challenged Habitat for Humanity to raise an additional $20,000, and many Catholic parishes and schools helped out with the fundraising. A number of parishes ran ads in their weekly bulletins, asking for financial contributions.

On the morning of Aug. 15, before construction began, Fr. Tim McCabe celebrated Mass for the crew of volunteers and professionals. Father McCabe, a newly ordained Jesuit, serves Detroit’s least-advantaged citizens as associate pastor at Ss. Peter and Paul (Jesuit) Church near downtown and as director of the church’s Warming Center for the homeless.

After Mass, approximately 20 to 25 volunteers joined forces to help erect the new home, which has four bedrooms and 2 ½ baths as well as a one-car garage. “It’s a basic but comfortable home,” said Franey. She added that the Pope Francis House will feature a new stove and refrigerator, donated by Whirlpool.

Enthusiastic volunteers came from five area parishes including St. Therese of Lisieux in Shelby Township; Our Lady Star of the Sea, in Grosse Pointe Woods; Ss. Cyril and Methodius Slovak Catholic Church in Sterling Heights; St. Owen’s in Bloomfield Hills; and the Basilica of the National Shrine of the Little Flower in Royal Oak. They were joined by volunteers from local Knights of Columbus Councils and from the Archdiocese of Detroit’s Young Adult & Campus Ministry.

Joe Hejka, Grand Knight of Knights of Columbus Council No. 4401 from Our Lady of Sorrows parish, expressed pride in the work he and his team had done on the home. He said, “You get to look at the house and think, I helped build that!”

Habitat for Humanity Detroit has been organizing Blitz Builds in Detroit for 29 years. During that time, Tara Franey reported, they’ve built 110 homes. This year they constructed five new homes, and rehabilitated five others.

Right now the group is putting finishing touches on the home. The Pope Francis House and the other Habitat homes will be dedicated on Dec. 18, just in time for Christmas. The dedication is a celebration for family and friends, as well as an opportunity to thank the sponsors. Volunteers who have generously given of their time and talent have a chance to meet the family who will occupy the home. The dedication will include a responsive reading and a short blessing, offered by a clergy member from the church which the new family attends.

Habitat for Humanity considers itself a “self-improvement program,” not a charity. Potential buyers are required to complete 250 hours of “sweat equity,” assisting volunteers in building their own home or others’ or working in Habitat for Humanity’s office. Additionally, they must raise a minimum $1,500 down payment in order to qualify for Habitat’s interest-free mortgage. The average monthly payment for a Habitat for Humanity house is an affordable $500.

Franey couldn’t reveal the identity of the family who will spend their first Christmas in Pope Francis House. “Until a family crosses that threshold,” she said, “we do not say this is definitely your home.”

Kathy Schiffer is a freelance writer and speaker, and her blog Seasons of Grace can be found on the Catholic Portal at Patheos.