Are We Zealous for Spiritual Combat? 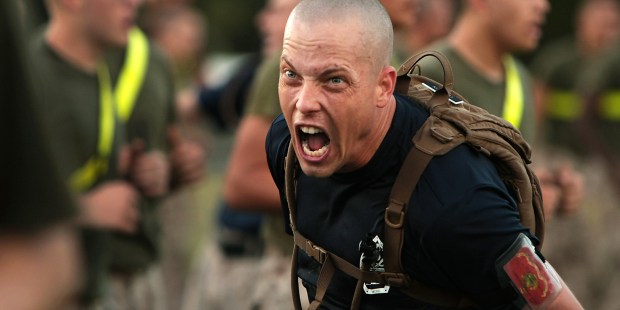 Fighting for souls—fighting to win

These words were yelled by a police academy instructor to one of his students (a friend of mine) during a training exercise at the academy. Sammy and another cadet were in protective gear, rolling around on the ground, pounding each other and struggling for possession of a rubber gun.

Sammy shared with me how that exercise affected him. “Father, I wrestled in high school, so I’m used to struggling with another man to win. But in wrestling, we were only fighting for points; we were safe, we respected each other and we didn’t wish each other harm. At that academy exercise it was like high school wrestling—we each wanted to win, we were safe and we didn’t want to hurt each other. The difference was that we were practicing for a time when I wouldn’t be safe, and I would be fighting against someone who wants me dead. I knew then that I had to train to the best of my ability, to be 100 percent sure that I could prevail no matter what. If I couldn’t or wouldn’t do that, then I knew I would have to quit, because otherwise I’d get myself or some innocent person killed. In a real life-and-death struggle, there is no ‘time out,’ and there is no mercy.”

Sammy’s story got me to thinking. What if we approached our spiritual lives that way? What if we approached spiritual warfare that way? You see, in our spiritual lives we are being contested over. (“Be sober, be watchful. Your adversary the devil prowls around like a roaring lion, seeking someone to devour” 1 Peter 5:8. “For we are not contending against flesh and blood, but against the principalities, against the powers, against the world rulers of this present darkness, against the spiritual hosts of wickedness in the heavenly places” Ephesians 6:12.) Our enemy the devil does not want us merely dead—the devil wants us damned. The devil wants us to suffer the endless death of eternal separation from the Living God, the God for whom we were made.

Sammy reoriented his life to be prepared, if need be, to fight for his life. He trained and exercised; he gave up smoking. He trained to fight and win because he knew he may be drawn into a fight that he could not afford to lose.

But Christians are always already in a fight for their souls—a matter of eternal life and eternal death. It is a fight that cannot be avoided. It can only be won or lost. If Sammy reset his whole life for a fight he might not have, how can we not train as least as hard for a fight we are certainly already in?

With gravity, clarity, zeal and hope in God’s grace, we must gladly and confidently train to fight and fight to win the battle for our souls. Here is a prayer we should commit to memory and teach to our children. It is taken from the Responsory of the Office of Readings from the Common of Several Martyrs, from the Liturgy of the Hours:

“We are warriors now, fighting on the battlefield of faith, and God sees all we do; the angels watch and so does Christ. What honor and glory and joy, to do battle in the presence of God, and to have Christ approve our victory. Let us arm ourselves in full strength and prepare ourselves for the ultimate struggle with blameless hearts, true faith and unyielding courage.”

The first place we must look to confront our spiritual nemesis is right in the mirror. The greater enemy is the enemy within—our own laziness, our own selfishness, our own excuses. To defeat that enemy takes moral strength. It takes a courage that can only come from grateful love for Christ our King. To defeat our inner enemy—that would-be traitor who always has an ear open to the devil’s whispers—to defeat that enemy will take all of a Christian warrior’s honor and courage.

To be a true warrior for Christ our King, we must defeat our inner enemy, that coward, that lazy man who wants to do his duty with only one hand and half his heart. Our inner enemy is not one that can be conquered by a single act of the will. The foe in our soul we overcome, one day at a time, by discipline, repentance and by the small acts of sacrifice that others scorn as unnecessary. We fight to win the war within ourselves so that we may be free to win the war around us.

To fight the good fight wisely and well, I recommend Thigpen’s Manual for Spiritual Warfare; Heilman’s Church Militant Field Manual; and an updating of a classic, Spiritual Combat Revisited. We fight for our own souls, and we fight for the souls of all—souls bought and paid for by the Precious Blood of Christ our King. Let not Satan rob Christ of so dear a victory! Let’s commit to memory these words from the prophet Joel: “Beat your plowshares into swords, and your pruning hooks into spears; let the weak say, ‘I am a warrior’” (Joel 3:10).

When I write next, I will speak of preparations for the Thanksgiving holiday. Until then, let’s keep each other in prayer.