Why All Those Programs to Renew the Church Don’t Work 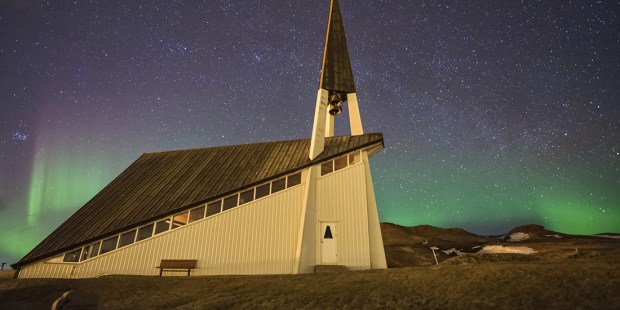 From the outside the church looked like an alien spaceship that had landed in the middle of a parking lot off the highway. Or like a white umbrella, the kind bars put in fruity drinks. I hadn’t been to the church since it had been remodeled but stopped for Mass one night on the way to meet friends.

It had been hideously ugly on the inside. The new sanctuary was much better than the old but still wasn’t beautiful in the ways old-style churches can be beautiful. It did not feel like a space for prayer. With the sections of pews at different angles wrapping around the wide flat sanctuary, with the broad wall behind it free of any painting or statue, it felt more like space for a crowd around a stage than a space for people ordered for a single purpose. As I sat in the pew before Mass, I thought about what I would have done had I been in charge of the renovation.

And I couldn’t think of anything. Putting rooms to the side to make the sanctuary more classically linear (the only thing I could think of) would either have given up too many seats or left it a shape no better suited for the Mass. Whoever tried to remake the inside of the church, even were he the most traditional of Catholics, would have wound up with something very like the church I was sitting in. The outside determined what could done inside.

The Church is like this. The form we’ve inherited determines what we can do to renew it.

Reformers think: Just do this, just do that, stop this, start that, that’ll change the Church. Make catechetics more doctrinal, or make it more personal; make the worship more formal, or make it more informal; return to the Latin Mass or make the ordinary form even more populist; learn from the Evangelicals or be as different as possible from the Evangelicals; ordain married men, celebrate celibacy, ordain women, discipline people who want women ordained, urge people to pray for vocations, put more money into parochial schools, close churches and open new ones in better places, increase the hours for confession, have rallies in the cathedral.

Good ideas, some of them, but they won’t change the Church much.

For such programs to work, the people of the Church have to feel the supernatural as a present reality. The majority of Catholics don’t believe in Transubstantiation or that Jesus has any special presence in the Eucharist at all. For many it is simply a dramatic retelling of one of the Church’s foundational stories, or perhaps a symbol of unity and fellowship, or maybe just something Catholics do.

Fewer and fewer seem to use the sacramentals and the classic devotions, or even know about them. When, as a new Catholic, I asked a cradle Catholic around my age what this or that devotion was about, he would sometimes answer with a nostalgic story about his childhood and sometimes with an apologetic shrug. A couple said something like, “Oh, we don’t do that anymore.” One laughed and said, “That’s just Catholic kitsch.”

Too few of us have a matter-of-fact comfort with the supernatural and an unconscious, instinctive Catholicism. I mean the kind of thing I saw in a friend who said, “I was telling the Blessed Mother” in the way she’d say, “I was telling John,” when I and most of my friends could only say, “I was saying the Hail Mary.” I think I’m more typical of the active Catholic than she is.

I’m constantly amazed and humbled at the number of people who have an unpolluted faith in the supernatural and easy intercourse with Our Lady and the saints. Yet many, even among those active in the Church, have secular-leaning and naturalism-assuming minds. I know this for myself. Even after years of formation I keep finding how my mind goes one way when the naturally Catholic mind would go another. The world is too much with us.

This loss makes renewal harder. It does, I think, reduce the attraction of the Mass and the reasons to go when you don’t want to. It must make confession feel less like a mercy and more like a transaction. It reduces our circles of accountability because we don’t feel intimate with the angels and the saints. It keeps us from identifying more closely with Our Lord and His Blessed Mother because we don’t practice the devotions that help us do so. It changes how deep the priest can go in his homily. These all have knock-on effects.

It certainly reduces the power of any new program to renew the Church. Programs are only as effective as the people in them allow. Making an old ugly church beautiful won’t much change the parish’s life when most of the people believe that sitting in that lovely new tabernacle, placed so prominently behind the altar, is only a symbol of our common life, and not the Lord of the universe. It will be a pretty, restful space, not a place for a life-transforming encounter with God. We might pray for vocations but not have the kind of faith that would move a young man to want to serve us as a priest.

The faith of my friend who chats with the Blessed Mother drives the Church and supplies the spiritual and the practical resources for renewal. Once lost, as it has been so widely in the West, it can’t easily or quickly be recreated. No proposal for renewal I can think of recognizes this loss and need. People like programs because starting programs is easier than changing hearts.

We have to work with people (including many of the obedient) whose minds are still secular, who live with the supernatural only by choice and effort. And we know from our own lives how hard it is to change even when you believe it all. The Church has to be rebuilt the church within the building that looks like a fruity bar drink umbrella—and that’s hard, and only changes so much. It’s why we pray for renewal and ask the Holy Spirit to intervene.