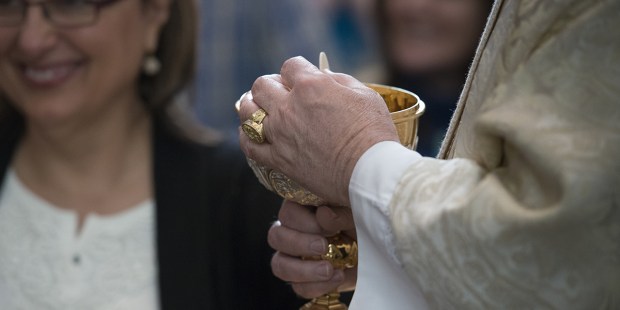 “I had absolutely no idea that I wasn’t supposed to be receiving Communion.”

With a heavy heart I’ve read and watched as the discussion about divorced and remarried Catholics receiving Communion has played out in the public sphere. It has been dismaying to see the very people with whom I’ve identified myself for many years—“conservative” Catholics, who, like me, fully believe and follow the teaching of the Church—bring a hammer, not an open heart, into the discussion.

While watching, I’ve asked myself with alarming frequency, “Would I be Catholic had I encountered such voices upon my return to the Church? Would I have become a Catholic theologian had I been barred from receiving the sacraments at a time when I was a bruised reed?”

I believe the Lord is calling me to share my story, because personal stories involve real people, real life situations, real consciences and real relationships with God. Personal stories involve the mystery of God’s grace, how grace works in the human heart, and how it often moves outside the boundaries and structures erected for our good. I’ve decided to tell my story anonymously to avoid public scandal, but please know that I am a faithful daughter of the Church, a Catholic theologian who holds the mandatum, a servant of the Church’s Deposit of Faith who has vowed personally to my archbishop to teach authentic Catholic doctrine in full communion with the Catholic Church, and never to teach anything that contradicts the Church’s teaching. I have kept my promise—a promise I take seriously—during the entire 15 years I’ve taught Catholic theology.

Having said that, I feel much disappointment over what has been both assumed and stated repeatedly in discussions about the divorced and remarried, and over the persistent characterization of those in irregular marital situations as “unrepentant,” “in disagreement with the teaching of the Church” and “in mortal sin.” The sad fact is that many people are in irregular marital situations today because, at the time of their wedding, they were unevangelized, uncatechized and had not come to personal faith in God in the Catholic Church. In other words they may not have known any better.

I was in an irregular marriage for a number of years upon my return to the Catholic Church. Like many others who grew up post-Vatican II, I did not know Christ or a whit of Catholic teaching, in spite of being educated in Catholic schools from kindergarten through college. A year after graduating from college as a professed agnostic, I thankfully awakened to a personal relationship with Jesus Christ through an evangelical Christian church. I have loved the Lord with my whole heart, mind and soul ever since. Shortly thereafter I married a divorced, non-practicing Catholic in that church. Several years later we made our way home to Catholicism. I returned to the Catholic faith as a daily communicant who, for the next three years, had absolutely no idea that I wasn’t supposed to be receiving Communion. By that time I had become active in my church community, involved in a prayer group and friends with many of the people I’d met at daily Mass.

When an ex-Catholic friend informed me of the Church’s teaching, I immediately called our parish priest, praying fervently that he would direct me in God’s will. We met in person the next day, and after discussing my situation at length, he advised me to ask my husband to begin the process of regularizing our marriage and suggested that I continue to receive Communion while that unfolded. All of this I did, as I had no intention then or ever of disobeying the counsel I was given. My only objective was to earnestly seek and do the will of God.

It took five years of serious prayer and discussion before my husband agreed to file for a decree of nullity. His hesitancy was due to his conviction that an annulment proceeding would place an unbearable burden on his already-strained relationship with his children from that marriage. (Sadly, he was quite right.)  This, in spite of the fact that his first marriage had been a “shotgun wedding” with a woman he had no desire to marry, brought about by the coercion of unhappy parents. Further, both parties were non-believing Catholics. (Their union was ultimately declared invalid by a marriage tribunal.)

During the year it took him to write the petition for the decree of nullity, plus the five years it took for a marriage tribunal to hear his case and issue the decree, I was consistently advised by pastors and spiritual directors to receive Communion, of which I partook daily. During this time I enrolled in a masters program in theology, giving rise to the occasion to discuss my situation at length with my moral theology professor, a well-known moral theologian at a highly orthodox Catholic university. His response? “You have been given good advice. Continue to receive Communion.”

Why was I given such counsel? Did I consult with a string of “liberals” who were inebriated by the “spirit of Vatican II?” Not in the least. I brought my dilemma to holy orthodox priests and upholders of Catholic doctrine; priests and theologians who understood that there are nuances in personal situations and in decisions concerning conscience. Thankfully, they also understood that pastoral decisions must be discerned and applied on a case-by-case basis according to the attitude, disposition and conscience of the person seeking counsel.

It is the ordinary practice of the Church to call people to repentance and conversion, to form their consciences according to Church teaching, and to invite them to live their lives in accord with such teaching. (This is true, at least, in principle, even if it has not been the case for millions of Catholics.) However, in extraordinary circumstances, when a person can’t bring their lives into formal alignment with Church teaching for a variety of reasons, it has been an accepted pastoral practice to have such persons make a decision of conscience in the “internal forum” about receiving the Sacraments—in the secret sanctuary of the conscience, where a person “is alone with God whose voice echoes in his depths” (CCC par. 1776).

While such scenarios may not be discussed publicly due to the risk of scandal and abuse, this is an age-old practice in the Church, and it takes into account the reality that while the law and its norms are good and necessary, there may be situations that the lawgiver did not foresee, or that may not be provided for by the letter of the law. Cardinal Joseph Ratzinger referred to the possibility of recourse to the “internal forum” for the divorced and remarried in a 1998 document by the Congregation for The Doctrine of the Faith (written by Ratzinger and approved by Pope John Paul II) wherein he stated:

Admittedly, it cannot be excluded that mistakes occur in marriage cases. In some parts of the Church, well-functioning marriage tribunals still do not exist. Occasionally, such cases last an excessive amount of time. Once in a while they conclude with questionable decisions. Here it seems that the application of epikeia [i] in the internal forum is not automatically excluded from the outset. This was implied in the 1994 letter of the Congregation for the Doctrine of Faith. (ii)

He then stated: “This question demands further study and clarification. Admittedly, the conditions for asserting an exception would need to be clarified very precisely, in order to avoid arbitrariness and to safeguard the public character of marriage, removing it from subjective decisions” (iii).

What he did not say is that exceptions never exist, or that every person and situation can and must always be held to the letter of the law, without exception.

Another scenario mentioned by Ratzinger in the same document is when “non-believing Christians—baptized persons who no longer believe in God” marry in the Church “for the sake of tradition,” subsequently enter in a new, irregular marriage and then come to faith in God. Ratzinger raises the question as to “whether every marriage between two baptized persons is ipso facto a sacramental marriage.” He then offers his personal opinion that a marriage celebrated in the Church without faith may be invalid, concluding that the matter must be “studied further” (iv).

All of this begs the question: How many marriages today, entered into by non-believing Catholics for the sake of tradition, are invalid? And this begs a further question: Could a second marriage, entered into after faith in God was found in a Protestant church (as was our case) be considered valid but illicit, if the first marriage was, in fact, invalid? Invalidity exists in the conferral of the Sacrament—marriage tribunals don’t “create” it. Their role is to formally recognize invalidity and then pronounce a public judgment on it. None of this touches on the doctrine of the indissolubility of marriage, which refers specifically to valid marriages. Invalid marriages don’t exist, and the Church’s tribunals merely recognize this fact.

As Cardinal Ratzinger recommended, these questions need further study and discussion. For it is often massive cultural shifts that become the ground of not only the Church’s development of doctrine, but of the calling forth of more human pastoral practices that hold the potential to heal the wounds of a bleeding body of believers. I know they healed mine.

[i] The Catholic Dictionary at Catholic.org defines epikeia as “ liberal interpretation of law in instances not provided by the letter of the law. It presupposes sincerity in wanting to observe the law, and interprets the mind of the lawgiver in supplying his presumed intent to include a situation that is not covered by the law. It favors the liberty of the interpreter without contradicting the express will of the lawgiver. (Etym. Greek epieikes reasonable.)

[ii] Congregation for the Doctrine of the Faith, Concerning Some Objections to the Church’s Teaching on the Reception of Holy Communion by Divorced and Remarried Members of the Faithful, par. 3 c., 1998.

Maria Benerada is the pen name of a Catholic theologian who chooses to share her story, and her thoughts, anonymously – Editor