The Catholic Imagination of Brad Zellar 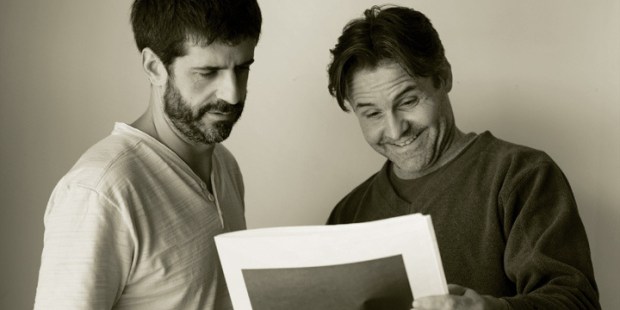 The author and journalist has an uncanny gift for singling out the forgotten person and unveiling his enduring, but neglected wonder.

I remember the first time I met him. It was at lunch with a mutual friend when we were introduced. He stood and approached me arm outstretched with a boyish grin, unshaven face and an enviable shock of salt and pepper hair combed back carelessly, yet with an honest and artful precision. His eyes were sad and genuine, revealing surfaces covering great and complicated depths. His T-shirt was faded with an authentic “Polaroid” logo—a curved rainbow streaming out of the brand name’s bottom. Immediately, the first word that sprang to my mind was: classic.

This was Brad Zellar.

As we ate and became acquainted, a few things became immediately apparent. This guy is smart as hell. His wit is razor sharp, but tinged more with hope than irony. He has read widely yet can obsess on particular “rabbit holes” that at first seem peculiar but soon prove to be brilliant when his rationale is explained. He doesn’t sleep much and writes a thousand words a night in moleskine journals … and has for more than twenty years. He is honest without being abrasive.

During our lunch in an upscale Minneapolis suburb, a disheveled figure approached Brad and the ensuing rapport was immediate, warm and convivial. There was clear affection and earnest interest. Shortly after the man left, we were told that he was a successful musician and friend who had fallen on some difficult times. It was not gossipy or intending to impress. Rather, it was a sensitive reminder to look out for a brother once on the bright peak and now enduring the shadowy lowlands.

Brad has written for Minneapolis’ City Pages, the Utne Reader and was senior editor and writer for The Rake. He has won numerous awards and commendations for his craft. He has traveled and collaborated with celebrated photographer Alec Soth on a series of “dispatches” from far-flung locales. And to hear Brad tell his tales is to be momentarily transported into hidden and forgotten worlds where surreal lives are vividly illustrated by the words of a master storyteller. In particular, he has a keen sensitivity and an uncanny gift to single out the forgotten person and brilliantly unveil his or her enduring, but neglected wonder.

Welcome to the Catholic imagination of Brad Zellar. In 2012, Brad told the story of an invisible man, Lester B. Morrison. The story is called House of Coates. The first dedicatory words of the book speak volumes, so I will let them speak for themselves:

Here’s to the prisoners of disenchantment, the lost, broken men bullied and inoculated against hope as children and eventually immunized against all notice or attention. To the lost boys and invisible men. To those who have been carved small by the glaciers of time and memory. To the fundamentally amnesiac, nurturers of the selective oblivion of the neglected. To the men who keep secrets even from themselves. To the ceaselessly retreating armies of the lonely. To the men who play hide and seek. Here’s to Lester B. Morrison.

In House of Coates Lester is a drifter who you see and don’t see. He is loitering in the highway truck stops, pushing broom in the shadows of the small town gas station, or hurriedly closing the door behind him in the run-down roadside motels. He is missed and not missed. He seems to have no depth because no one scratches the surface to see. He is stone. Gray, impassive, background, invisible. But in fact he has great and awful depths. Great and awful.

Lester’s existence has become one of hiding, being unnoticed, being nothing. If he is brushed against and acknowledged it is uncomfortable, unsettling. Because a drifter who is acknowledged must reckon with what the other’s eyes must see in him. Like a funhouse mirror he risks being hurt by the grotesque he sees mirrored back at him. His nothingness feels painful when it is transformed, outed and overtly declared as Nothingness. Lester feels he needs no reminders. As Brad writes,

The sad truth, of course, is that the world seldom wants much of anything from such people, and that is a truth that could do nothing but further hurt the feelings of men who had had their feelings hurt so many times and in so many ways that they could no longer feel anything but hurt

And so Lester would transiently reside in a forlorn and forgotten motel, the House of Coates, not far from the gleaming, smoking city of steel that is the local oil refinery. Alec Soth’s pictures placed throughout the book illustrate the world where Lester hides himself. Everything seems dirty, neglected or, simply, an anachronism. A mangy dog prowling in the dark. Rusted out snow-covered muscle cars. A garage door with Bambi emblazoned on its center. Dirty snow half plowed in an unused parking lot. This was the world of the invisible man.

But in this mean world of woe and hopelessness, Brad hit me square between the eyes. It was a memory from childhood that Lester never let go.

[As a young boy, Lester] once received an Alvin and the Chipmunks coloring book for Christmas. He could not bring himself to color in the pictures; it seemed an unnecessary violation. The coloring book was an intended collaboration that was for Lester perfect as it was. The black-and-white line drawings were intoxicating enough as launching points for flights of fancy.

If he were to color in the book he would be subjecting its pages to inevitable wear and tear; there would surely be mistakes. He carried that coloring book with him in a plastic bag in his knapsack, intently inspected its covers and pages each night for signs of wear. He treated the Alvin and the Chipmunks coloring book like an archival object that had been entrusted to his care. He couldn’t bear to be parted with it, and studied it obsessively at every opportunity. Other children noticed this, of course; it is the nature of children to take careful note of obsessive vulnerabilities, and to mock or disrupt them whenever they can.

One day at school Lester’s Alvin and the Chipmunks coloring book went missing, and he was inconsolable. For several months he pored over his copy of The Hardy Boys Detective Handbook and set out to find the thief or thieves of his coloring book. This dogged investigation was ultimately fruitless and only led to more mockery and marginalization.

This invisible man was, as a child, like me. He had a childish love—devotion—to something simple. He treated it with great care. And he lost it. No one can see the old, loner man crestfallen over something he lost. We never look for it. And he’ll never show it. But we can all see the child. And, perhaps, we may even have been that child.

House of Coates is suffused with the Catholic imagination. And in all honesty I haven’t read a book of such depth and such gnawing urgency to repeatedly consider its wisdom since reading the novels of Flannery O’Connor or Georges Bernanos. Brad delicately tells a story where in the midst of invisibility, there is Dignity. In the midst of uncertainty, there is Calling. In the midst of melancholy, there is Hope. In the midst of suffering, there is Grace. Dignity, Calling, Hope and Grace. And along his journey, one wise woman reminds Lester of a very Augustinian truth, “If you’ve got a hole in you, you can’t live in this world unless you figure out what goes in that hole.” The Catholic Imagination at its finest.

When I was about to first read House of Coates, I anticipated an interesting tale written by a talented storyteller. What I experienced was infinitely more. I have since read it several times and am continually struck by its haunting beauty and its penetrating wisdom. There is something special in this book. And in this author. Keep an eye on him. Brad Zellar may not be Catholic. But his imagination is.

Tod Worner is a husband, father, Catholic convert and practicing internal-medicine physician. He blogs for Patheos as A Catholic Thinker.