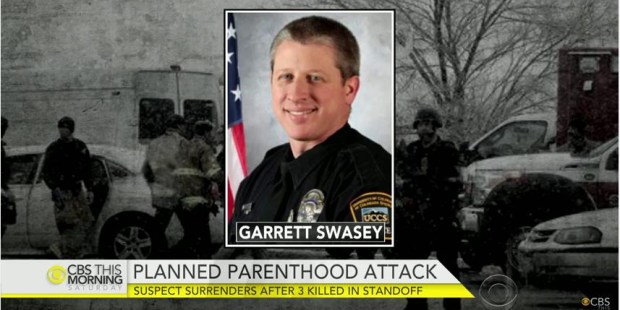 As motive is still being investigated, Terry Mattingly looks at Christian background of heroic officer

As the tragic story out of Colorado Springs is being absorbed, investigators and journalists are treading carefully around possible motives behind Robert Lewis Dear’s violence. Get Religion’s Terry Mattingly notes that slain police officer Garrett Swasey was a co-pastor at his Evangelical Church, who died defending life.

Now in this case, the tragic reality is that it is much easier to articulate the motives of the local police officer who was one of the first responders and lost his life in the fighting.

Are you seeing that title – “The Rev.” – in front of his name? I put it there because of information included in the sidebar printed this morning by The New York Times.

“Garrett Swasey, 44, the University of Colorado Colorado Springs police officer who was shot and killed while responding to a shooting at a Planned Parenthood office, was described by his fellow church members and friends as a courageous man and loving father who drew strength and inspiration from his Christian faith.

He was married, with two young children, and had been on the campus police force for six years. He also spent seven years as a co-pastor at Hope Chapel in Colorado Springs. ‘Here’s a guy who worked full time as a police officer, and then gave a great amount of time to his local church and didn’t get a dime for it,’ said Scott Dontanville, a co-pastor who knew Officer Swasey for 15 years. ‘He did it because it was the thing that he felt he needed to do.’

‘It’s not the first time that he’s been placed in harm’s way,’ he said. ‘He’s an absolute man of courage.’

Mr. Dontanville noted that although Officer Swasey would ‘disagree with the abortion industry,’ it would not have been a factor in his actions on Friday.

It is reported that Dear’s actions began “in the parking lot between the PP clinic and the grocery store”, and it is not yet clear whether his motivation had anything to do with abortion, or he simply went into the building, for cover.

That has not stopped some in the press from speculating on whether the shooter was connected to pro-life activists, and the possible relevance of recent videos showing Planned Parenthood abortion providers discussing and demonstrating how they harvest fetal organs, with the intention of selling them for medical research.

With that in mind, Matting linked to remarks made by John Cardinal O’Connor, of the Archdiocese of New York City who, in 1994, reminded Christians that violence against abortion-providers was an unacceptable response in the name of Jesus Christ:

“If anyone has an urge to kill someone at an abortion clinic, they should shoot me,” said the late Cardinal John O’Connor, preaching to his New York City flock in 1994. “It’s madness. It discredits the right-to-life movement. Murder is murder. It’s madness. You cannot prevent killing by killing.”

Mattingly’s full analysis is here. Let us pray for the victims of this shooting and their families, and for Robert Lewis Dear’s soul, as well.