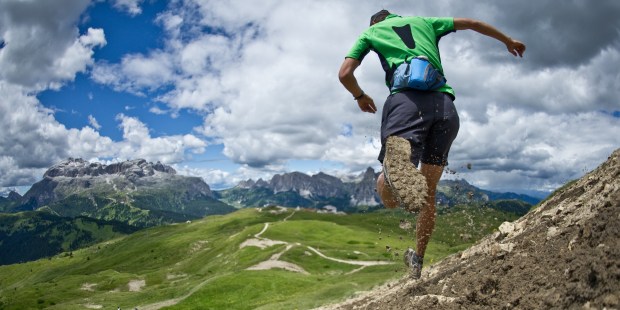 Long-distance running, the perishability of the body and the hellish vision of techno-utopians

The other day before setting out on my run, I cinched on a light utility belt equipped with two plastic holsters, each containing a small squeegee bottle filled with Gatorade. Taking a mouthful every few miles, I discovered that my body liked having its spent electrolytes replaced. Or that’s what I surmised when it rewarded me by running a personal best distance of 22 miles without afflicting me with a case of the crankies.

As you can see, I’m in the habit of referring to my body as a being separate from the rest of me. This is bad theology, but the old husk does have, so to speak, a mind of its own, consulting me only in certain matters. I can decide which key to strike next with my ring finger, but it was my bones’ unilateral decision to quit growing and maroon me at the contemptible height of five-eight. It will quit altogether in its own time—possibly sooner than I’d like, possibly later.

To future generations, statements like that may sound quaint. Through genetic engineering, robotics, artificial intelligence and nanotechnology, scientists are aiming at making our species so much stronger, smarter, healthier and longer-lived that it will cease to resemble our species as we know it. Post-humanists envision a future in which the human mind will interface seamlessly with computers, and when the human body will be immune to disease and aging.

To a certain point in my life, the prospect of becoming a super human would have excited me. My body was of the lesser-to-middling sort, unimpressive to look at and less than normally capable of placing itself under fly balls. Consequently, I came to appreciate my body only in a limited way—as a receptacle for the sorts of pleasure that could be gotten through cigarettes, booze and cocaine.

Taking up long-distance running in earnest has forced me to respect it in all its quirks, through all its moods. Even when it won’t submit to my intellect and will like a well-trained German shepherd, it will condescend to engage in dialogue. The trick is learning to interpret the messages it sends.

If, pounding up a steep hill, I start to think that life is meaningless, or that all my friends are false and my enemies real, these are less philosophical positions arrived at through the exercise of reason than petulant text messages from my body. Properly understood, they mean: “You forgot to carb me up last night. If you must play Ozymandias, at least toss some corn to the slaves, you SOB.”

But I’m also finding, to my surprise, that when my body is properly fed, watered and rested, it can perform more reliably than my brain. Past mile 12, running becomes a stone bore. Sometimes I’ll pick fights with myself just to have something to think about. (A favorite motion for Oxford-style debate: “Long-distance running is a stupid hobby.”) Even as I’ve convinced myself that I’m wasting my time, my legs keep on pumping, with my feet striking the pavement mid-sole, as though they hadn’t heard a thing.

When rolling out their vision for the public, techno-utopians swing from geeky enthusiasm to cold-blooded realism. In Breakpoint, Richard Clark predicted “world peace, universal prosperity and evolution to a higher level.” Verner Vinge warned: “The competitive advantage … of every advance in automation is so compelling that passing laws, or having customs, that forbid such things merely assures that someone else will get them first.” Either way, they’re convinced: humanity will be enhanced beyond recognition whether humans like it or not.

If Catholics revere anything, it’s the perishability of the human form, original recipe. Bend an ear at Mass when the priest breaks up the Host with a snap, crackle and pop. That too is a message: “My flesh for the life of the world.” Soft though that flesh was, Jesus didn’t shrug it off like an evening gown. It consented to being given up with the greatest reluctance; only hours of ingenious Roman care could make it quit. Imagine the trouble they’d have had to take with a genetically engineered Super-Jesus: instead of 14 Stations of the Cross, we’d have about 512—or maybe none.

Francis Fukuyama warned of a “hell scenario” in which our descendants will “no longer struggle, aspire, love, feel pain, make difficult moral choices, have families or do any of the things that we traditionally associate with being human.” I can be more specific. None of the hulking, deathless bliss-ninnies will know the modest satisfaction that comes, in early middle age, from transforming a sub-ordinary human body into something that might not look too out of place tied to a post and shot full of arrows. None will hear the message in the breaking of an old-fashioned body.

Max Lindenman is a freelance writer based in Phoenix. He blogs at Diary of a Wimpy Catholic.