Rosemary in the Life of Jesus, Mary and Joseph 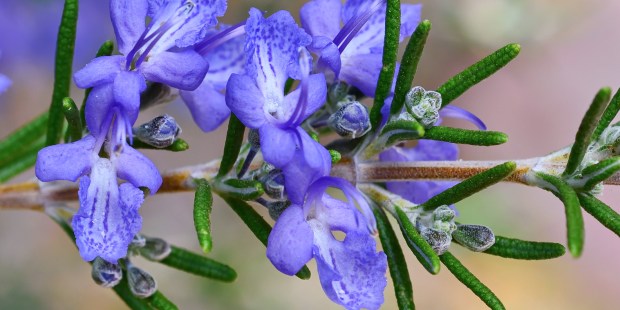 Joseph would have added sprigs of rosemary to the stable’s straw, to protect infant Jesus from bugs

The purple of Advent and Lent is the color that bookends the life of Jesus. Both holy seasons are penitential, in preparation for the coming of the Christ: the Incarnation, Resurrection and Return. I like the continuity of a color that threads its symbolism through our religion. We know by altar linens and chasubles of priests what season we are in, and what prayers will be said. The purple of penitence and preparation, reds of sacrifice, whites of virtue and victory and the green of hope and freedom.

There is also symbolism in the plants used in our rituals; the most familiar are the fronds on Palm Sunday (burned to create the Ashes of Wednesday that mark the start of Lent) and evergreens throughout Advent and Christmas.

And then there’s the purple-flowering herb, rosemary. I’m on a personal mission to be sure this plant is every Catholic home and parish at Christmas!

Rosemary officinalis was a common and relatively large shrubby herb found throughout the Middle East during the time of Mary and Joseph. Why is it not mentioned in the Bible? It would be like writing about dish soap — something functional, necessary and completely irrelevant to The Story.

In those days, rosemary was a utilitarian herb used for maintaining a household. One if it’s many uses was to repel insects. It would be strewn on the interior floors, and especially incorporated into straw mattresses. Joseph, having been a bachelor for most of his life, would have known well about adding this herb in his own bedding.

When it came time for Mary to give birth, Joseph probably busied himself by preparing a bed in the manger for the newborn. More than likely he only had to step a few feet outside the stable to find this bushy herb in Bethlehem. Snapping off a few tender and fragrant, oily springs, Joseph would have added them to the stable’s straw to protect the baby Jesus from bugs.

The Holy Family lived as any family would in that century, and the chore of laundering fell to the mother; in this story that was Mary. Here again rosemary was used. The freshly washed clothing was laid to dry on its branches. The heat of the sun against the clothing drew the oils into the cloth to freshen and again protect. Throughout Jesus’ life, from childhood and into his ministry, clean clothes carried this fragrance.

In the religious practices of Jews at that time, rosemary was strewn in the tombs of the departed. The holy women coming after the Sabbath to anoint Jesus’ body would have carried copious amounts of this herb with them, and in all likelihood thrown it aside when they discovered the risen Christ.

In the language of flowers this herb symbolizes remembrance. What a beautiful plant to have present in our homes during Christmas. It will help us call to mind the life of Jesus, and his Holy Mother Mary, from the Nativity to the empty tomb.

I hope you will include in your Christmas decorations a lovely rosemary plant; it enhances not just chicken, but our whole lives, even the life of the spirit!

Margaret Rose Realy is a Benedictine oblate and the author of The Catholic Gardener’s Spiritual Almanac. She blogs at Morning Rose Prayer Gardens.