Angels of Advent: Announcing the Forerunner 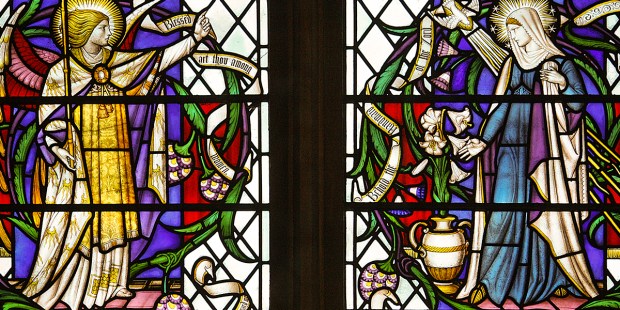 “I am Gabriel. I stand in the presence of God …”

Zechariah was a priest doing his duty, making the incense sacrifice in the temple, when an angel appeared to him. The story is told in the first chapter of Luke’s gospel. The angel told Zechariah that, despite he and his wife, Elizabeth, being too old to have children, she would have a son.

The language and imagery in the story is evocative of the Old Testament. Abraham and his wife, Sarah, were childless when three angels appeared to announce the birth of their son Isaac. Furthermore, the child who is to be born to Zechariah and Elizabeth will be like the Old Testament prophets. Like Samson in the book of Judges, the boy will not drink alcohol. Instead, he will “have the spirit and power of Elijah.” As a fulfillment of Isaiah’s words, the boy will “prepare the way of the Lord.”

The angel says, “I am Gabriel. I stand in the presence of God, and I have been sent to speak to you and to tell you this good news.”

Cynics would say the story of the angel is a “mythological” element which Luke added to the simple story of John the Baptist’s birth. Not believing in the supernatural, the cynic has no place for angels. They are no more than fairy godmother like figures that add interest and wonder to a natural story.

It would be narrow minded to be so dismissive. Intelligent, noncorporeal beings are one of the common features of all world religions — not just Christianity. Stories about encounters with angels are so universal to the human experience that they cannot simply be dismissed with a scornful wave of the hand. These encounters in every society and religion are remarkably similar, and Zechariah’s account aligns with them.

The angel Gabriel says that he is a messenger from God, and the Greek word “angelos,” from which we get “angel,” means “messenger.” Gabriel is one of the archangels who the sages place in the highest order of the angelic hierarchy, but his rank in the hierarchy is secondary to the part he plays in the Advent story.

Gabriel is an important bridge from God’s revelation in the Old Testament to the truth he is about to reveal in his son—the Christ child. Gabriel’s message to Zechariah and Elizabeth about the birth of a son heralds the coming of the forerunner of the Christ. The Old Testament prophets had foretold one who would prepare the way for the Messiah, and Gabriel’s message to Zechariah is an important validation of John the Baptist’s claims to fulfill those prophecies.

As Gabriel is a bridge between the old covenant and the new, so John the Baptist himself has one foot in the old world and one in the new. He appears, as Gabriel says he would, as the last of the prophets. His desert hermitage, his rough garb and uncompromising preaching shows him to be an incarnation and summary of the whole Old Testament, which points to Christ and illuminates Christ’s mission and message for the world.

What is the angel Gabriel’s advent message to us today? Three things:

First, that we should always be watchful and waiting for the word of the Lord. He may indeed speak to us through the message of an angel, but his message is more likely to come to us through more natural means. Zechariah was in the midst of his duties of worship when the message came. Therefore, if we are to hear the message, then we must stop in the midst of our busy Christmas preparations to make time to listen within genuine prayer and worship.

Secondly, Gabriel reminds us that God’s love for us is rooted in the past, alive in the present and full of hope for the future. God’s ways are not our ways and Gabriel’s shocking message to Zechariah and to us is that the God who is in charge of history is also a God of surprises. He is doing things we cannot see, and when the message comes we need to respond with wonder, faith and obedience.

Finally, Gabriel, like every messenger from God, gives ultimate glory to Jesus Christ the Lord. His message to Zechariah was to prepare for the one who would prepare the way of the Lord. If we have the eyes to see and the ears to hear this Advent will also be a time to get rid of all obstacles, “make the rough places smooth” to prepare our hearts for the coming of Christ the king.