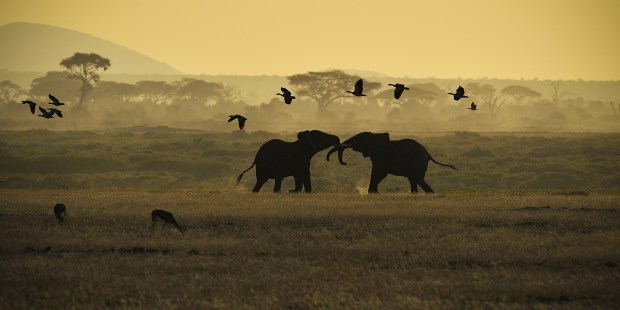 The new documentary Gardeners of Eden is a moving look at the elephant poaching crisis in Kenya. Images of decimated elephant carcasses left to rot in the plains are a powerful reminder of the ecological devastation rampant throughout the world.

But the film not only confronts exploitation of the natural world; it also looks at social realities that contain (and are contained by) environmental ones. Like the dying horse in Tarkovsky’s Andrei Rublev, the hunted elephants come to symbolize the surrounding exploitation of human beings as well. “When the stomach is empty,” one former poacher reminds the viewer with a chuckle, “you can do anything. We know the importance of the wildlife, but because of poverty we are forced to hunt.”

During his visit to the Kenya UN Center, Pope Francis had some powerful words to say about this issue, underscoring the very real web of connections between poaching, poverty, crime, and even terrorism in Africa.

Africa offers the world a beauty and natural richness which inspire praise of the Creator. This patrimony of Africa and of all mankind is constantly exposed to the risk of destruction caused by human selfishness of every type and by the abuse of situations of poverty and exclusion. In the context of economic relationships between states and between peoples, we cannot be silent about forms of illegal trafficking which arise in situations of poverty and in turn lead to greater poverty and exclusion. Illegal trade in diamonds and precious stones, rare metals or those of great strategic value, wood, biological material and animal products, such as ivory trafficking and the relative killing of elephants, fuels political instability, organized crime and terrorism. This situation too is a cry rising up from humanity and the earth itself, one which needs to be heard by the international community.

All of this builds on a central theme of Francis’ pontificate, one developed at great length in Laudato Si’: that there are deep, abiding connections between how human beings treat the environment and how they treat themselves and each other. “There is an interrelation between ecosystems and between the various spheres of social interaction,” Francis wrote, “demonstrating yet again that ‘the whole is greater than the part.’”

This idea that “everything is connected” (a key phrase from Laudato Si’) is a provocative one, especially as conflict erupts over “COP21,” the UN Climate Change Summit in Paris. All week, environmental activists have taken to the streets of Paris, some of them battling with riot police; meanwhile, commentators skewered President Obama and other leaders for political grandstanding and a lack of seriousness about the terror threat. The upshot has been a highly polarized view of COP21 vis-à-vis the worst attack in Paris since World War II. Is COP21 an act of defiance or simply a defiance of action?

Francis would seem to fall in the former view. In his speech in Kenya, he expressed hope that a COP21 agreement will target three “interdependent goals”: “lessening the impact of climate change, fighting poverty and ensuring respect for human dignity.” The implication is clear: we occupy a “great chain of being” with countless bodily and spiritual links. A failure in one sphere can easily trigger a failure in another, and a healthier environment is key to the fight for justice and peace.

But encountering Pope Francis can be a risky business. Yes, Francis’ integral ecology paints a picture of a common home stricken with natural and human crises; but he goes deeper, pinpointing the “technocratic paradigm” that links and propels these crises. This paradigm says that knowledge and progress “automatically flow from technological and economic power as such.” And in making ourselves the “lords and masters” over nature, we’ve also come to see ourselves as the “lords and masters’ of our own human nature. We exert an ‘absolute power’ over our own bodies, manipulating them like insensate objects — a Cartesian attitude which subtly flows back over to the environment. A broader domination of nature leads to overconsumption and the throwing away of food, water, and resources, and we soon find ourselves in a “throwaway culture” where the weakest and smallest among us are discarded like garbage.

Here, at the heart of Francis’ message to the world, murmurs can be heard all over the political spectrum. His is a criticism not just of pollution, but of all of modernity from top to bottom, a daring ecology that calls into question our most elementary assumptions: that knowledge is power, that power is progress, that progress is truth.

This message is hard. Who can accept it?