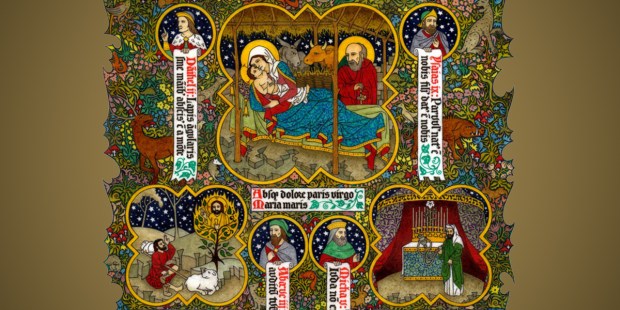 His images offer something new while remaining rooted in timeless ideals

Is it possible to be a traditionalist and an innovator at the same time? Daniel Mitsui’s work suggests it is. A fine artist who specializes in ink drawing on paper and calfskin, Mitsui was attracted at a very early age to anything resembling medieval art and considers Gothic art to be the best example of an art made according to Catholic principles.

Mitsui, who lives in Chicago with his wife, Michelle, and their three young children, earned an undergraduate degree at Dartmouth College in New Hampshire, where he studied various art mediums, concentrating mostly on ink drawing and printmaking. He also worked in modern styles and considered pursuing a career in comics or film animation.

Toward the end of his junior year, Mitsui, who wasn’t baptized or raised with any religion but always had faith and considered himself Catholic, approached a priest about baptism. In 2004, he was received into the Church at the Easter Vigil. This motivated him to revisit his interest in religious art. Today, he’s incorporating Japanese-style elements into his work and creating beautiful coloring pages for children and adults.

Mitsui’s openness to the beauty he finds in various art styles, and his desire to give God the very best, makes for unusual and powerful images from his pen. He told Aleteia’s Zoe Romanowsky about his work and artistic process.

Zoe Romanowsky: Tell me a little bit about your process as an artist. Is your work mostly by commission?

Daniel Mitsui: Almost all the drawings I do are privately commissioned. I receive enough requests that I’m able to be selective about which I accept. So I usually am working on projects that align to my own interests. I decline most secular commissions.

A commission starts with a discussion about content, size and materials. For a religious subject, there usually is an established tradition about it in art, or in exegesis, or in liturgy. In the course of researching this, a composition will come to mind. I almost never make preparatory sketches. Rather, I start work on the final drawing right away.

The order of drawing, typically, is pencil, then black pen and ink outlines, then filling in dark areas with bottled inks and paintbrushes. Sometimes I stop here. Otherwise, I proceed to add the medium colors, then the light ones, then gold and palladium leaf.

My favorite pieces tend to be the ones that I have finished most recently. Two in which I take particular satisfaction depict the Miraculous Mass of St. Gregory and the Sacred Heart.

In an article you originally wrote for Adoremus Bulletin, you said your strongest artistic influence is the religious art of medieval Europe. What is it about the art from that period that draws you?

My outlook on religious art — and on everything, really — is traditionalist; that is to say, I believe that there is an objective content to religious art that is knowable from the way things were done in the past. The greatest merit of medieval art is that it honors this content.

In the art called Gothic, the traditions are vigorously presented. The Gothic artists managed to be both faithful and creative. Patristic exegesis informs every composition, and the theological and liturgical order is obvious. But otherwise Gothic art doesn’t look like anything that came before it; its inventors didn’t imitate an ancient precedent. It’s astonishing how quickly they mastered new technologies and new media, such as monumental sculpture and stained glass, and how quickly their influence spread among the Catholic nations.

I don’t think of Gothic as a mere historic style characteristic of a certain time and place; that would make of it a very boring thing. Rather, I think of it as the best example of an art made according to Catholic principles — principles that are enduringly true. Paradoxically, because Gothic art is indigenous to Christendom, it can communicate with the art of other traditional cultures especially well; the essential religious content is protected and the style is defined by something other than a chronological or national boundary.

In 2010, a priest commissioned you to draw St. Michael the Archangel in the style of a Japanese woodblock print, which propelled you to learn more about Eastern Asian art. Did anything surprise you about what you learned, and how is this style influencing your artwork now?

I was most surprised at how popular these drawings became; I really didn’t expect to make more than one. Now, I’m focusing my efforts on integrating elements of the Japanese style into all of my work, rather than just affecting it on occasion. I especially like the subtle or even absent treatment of shadow in the Japanese woodblock prints, more than the profuse hatch shading seen in most European woodblock prints.

What do you enjoy about blending art forms? How do you know what works and what doesn’t work aesthetically?

My drawing is very precise, with sharply-defined edges. I tend to limit my influences to forms of art that share this same characteristic. Those forms of art are more likely to work well together.

You said that while making Catholic religious drawings in the Japanese style you became aware that you were attempting things that had not, to your knowledge, been done before. Did that make you question yourself, or was there an excitement about doing something new?

Well, my outlook is such that I don’t find newness exciting in itself. I had some serious doubts about the propriety of these drawings. But I have by now given the matter a lot of thought, and I believe them to be justified; they can be done in the true spirit of medieval art.

Can you talk about a project you are currently working on, or just finished?

The Sacred Heart was a particularly interesting commission. My patron challenged me to make this drawing because she was unable to find an image of the Sacred Heart that she really liked; she regarded the most popular ones as laughably inept. And really, I agree; I admit that I have delayed enthroning the Sacred Heart in my own home just because I don’t want to hang an ugly picture on the wall.

I determined to reconnect this devotion to its first expressions in the late Middle Ages. The 1467 Sanctus Salvator engraving by the Master E. S. served as a model for the posture and attire of Christ. My way of rendering the figure has more in common with Japanese art and Art Nouveau illustration, because I draw with lines of uniform thinness and eschew hatch shading.

The palette here I limited to dark colors and black, leaving everything else white. I got the idea for this color scheme from the white vine decoration in 15th century Italian manuscripts. This is perhaps the only direct influence of the Italian Renaissance on my own artwork! The lettering and decoration are based on Flemish millefleur tapestries.

The Sacred Heart itself, in its oldest depictions, is flat, simple, and symmetrical. Later artists gave it more dimension and detail, but without making it accurate anatomically. Their result, I think, is artistically disastrous: something like a big dripping strawberry with a tube projecting from its top. Here, I did the opposite: I started with the shape of a real heart, and reduced that to a stylized emblem. I placed the emblem within a frame shaped as an ogee trefoil. The Crown of Thorns fills the entire space between the edge of the heart and the frame.

The animals that appear in Christ’s halo include sea horses, embryonic dogfish, platypodes, chameleons, lyrebirds and a pangolin. Here, I further another of my long-term artistic projects: the application of the vision of God in nature (one of the most important principles of medieval art) to contemporary knowledge of nature. In the animals chosen here, I see symbols of universality; they represent all of creation worshipping its God. Chameleons, for example, seem to contain within themselves all colors, and lyrebirds all sounds.

Adult coloring pages and books have become a craze of sorts — why is this, do you think? And do you envision eventually having coloring books with your religious images for adults as well as children?

I haven’t followed the craze closely enough to account for it. I decided to make details of my work available as coloring sheets, not because of this craze, but because of the dearth of dignified coloring material available from religious publishers and homeschooling resources. These sheets can be downloaded from my website, and I certainly have no objection to adults using them! I don’t think that there ought to be two different types of coloring books, one with sophisticated artwork for adults, and one with insipid artwork for children; I think that everyone, no matter what age, should have good artwork.

My ambition is to make complete illuminated manuscripts, and to publish versions of them as fine press books. Eventually, I’d like to illustrate a Book of Hours, which was the quintessential devotional guide for the literate laity in the 14th and 15th centuries.

As for smaller works, I’m most eager to accept commissions to draw the Harrowing of Hell, St. Veronica of the Veil, the Head of St. John the Baptist and anything related to the visions of St. Hildegard of Bingen.

In general, I’m working to integrate the various kinds of art that I admire into a signature style that is still basically Gothic. Also, to give a more considered treatment to the natural world — to develop a signature way to draw pine trees, or basalt, or fog, or the sun. I want to learn some things from Hieronymus Bosch, a longtime favorite artist whose work, I think, is especially relevant today. And I want to study the symbolism of numbers that fascinated such exegetes as St. Isidore of Seville and Hugh of St. Victor, and to bring that into my drawing.

Zoe Romanowsky is lifestyle editor and video curator for Aleteia