A Year of Mercy, and Some Surprises, Outlined by Vatican 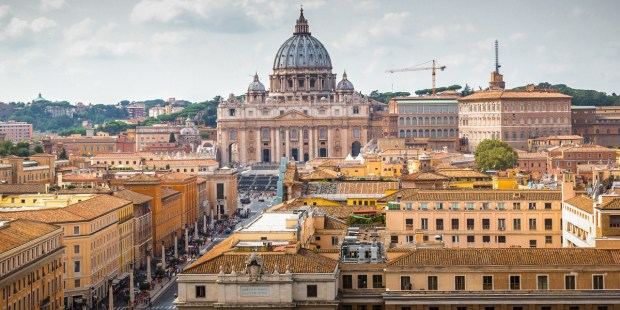 What can we expect in the Jubilee Year? A lot, actually

VATICAN CITY — Just days before the opening of the Year of Mercy called by Pope Francis, the Vatican has presented new details on the Extraordinary Jubilee.

At a Friday press briefing, Archbishop Rino Fisichella, President of the Pontifical Council for Promoting the New Evangelization, provided pilgrim information, described celebrations for the opening of the Holy Door at St. Peter’s Basilica, and outlined the five sins (whose pardon is reserved to the Holy See) that special missionary priests of mercy will have the faculty to absolve during the Jubilee Year of Mercy.

He also revealed some surprises, including a Laudato si’ inspired light show, on the evening of December 8, that involves projecting images of mercy and climate change onto the façade and cupola of St. Peter’s Basilica.

Pilgrimage Information Center
Pilgrims coming to Rome for the Jubilee will want to visit the Pilgrimage Information Center, located at Via della Conciliazione 7. Archbishop Fisichella said the Pilgrimage Center is “the place to find information about the schedule of events for the Jubilee; to register for the reserved walkway to the Holy Door; to pick up the requested free access tickets for the various celebrations which are required for pilgrims; and to pick up the testimonium of participation in the Jubilee.”

The testimonium certifies a pilgrim’s presence at the Jubilee. One testimonium has been designed for pilgrims who come to Rome on foot (a group is expected to walk from Siena for the December 8 opening of the Holy Door), while another will be available those who participate in the Jubilee Year in Rome, having traveled by some other means.

A special pilgrim’s pathway is being established along Via della Concilazione leading to St. Peter’s Basilica, offering pilgrims the opportunity to walk in pilgrimage to the Holy Door rather than wait in long lines. However, Archbishop Fisichella noted that “all those entering St. Peter’s Basilica and the Holy Door” will have to pass through a special security check overseen by the Italian police.

The Opening of the Holy Door will take place during the celebration of Holy Mass for the Solemnity of the Immaculate Conception on Tuesday, December 8.

The event will be televised worldwide. It will be introduced by readings taken from the four Conciliar Constitutions of the Second Vatican Council (Dei Verbum, Lumen gentium, Sacrosanctum concilium e Gaudium et spes), with two additional passages taken from Unitatis redintegratio (on ecumenism) and Dignitatis humanae (on religious liberty). December 8, 2015, marks the 50th anniversary of the conclusion of Vatican II.

Archbishop Fisichella described the ceremony as “very simple.” The Holy Father will request the opening of the Holy Door, with the psalm: “Open to me the gates of righteousness, that I may enter through them and give thanks to the Lord” (Ps 118:19) and then pass through it.

“After him, the Cardinals, Bishops, and representatives of priests, religious men and women, and laity will cross its threshold, and will continue in procession to the tomb of the apostle Peter, where the concluding rite of the Holy Mass will take place. The pope will then lead the Angelus as usual from the window of the apostolic palace,” the archbishop explained.

With what spirit should pilgrims approach the Holy Door? Fisichella responded: “The spirit, I would say, that Pope Francis set forth in Misericordae vultus: a spirit of conversion, to be able to place at the center the essentials of the Gospel, i.e., mercy, and to become an instrument of mercy.”

A Year of Surprises?

What surprises can we expect during the Year of Mercy? Fisichella announced that the first is set for the evening of December 8 at 7 pm and is titled “Fiat Lux: Illuminating Our Common Home.” It will consist in “a projection of photographs onto the façade and cupola of St. Peter’s, taken from a repertoire of some of the world’s great photographers.”

“These illuminations,” he explained, “will present images inspired of mercy, of humanity, of the natural world, and of climate change.”

He added: “This event, inspired by the most recent encyclical of Pope Francis, Laudato si’, is intended to present the beauty of creation, especially on the occasion of the Twenty-First United Nations Climate Change Conference (Cop 21), which began in Paris last Monday, November 30, and ends on December 11 … I can assure everyone that it is a unique event for its genre and for the fact that it is being displayed for the first time on such a significant backdrop.”

The pope has also decided to meet with the faithful in St. Peter’s Square on one Saturday per month, in addition to his usual Wednesday General Audience.

And finally, Fisichella said, we shouldn’t be surprised to hear that Pope Francis has called up a sick person and gone to visit him at his home, or arranged some other “private” meeting of mercy he might wish to have during the Jubilee Year.

Fisichella’s interesting remarks on Pope Francis’ unusual assembly of priests he calls “Missionaries of Mercy” can be found here.