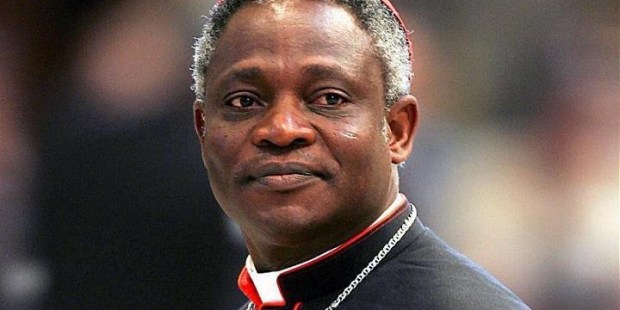 Explains that by “birth control,” he meant the spacing of births

VATICAN CITY — Cardinal Peter Turkson got into hot water yesterday when he appeared to suggest that birth control could “offer a solution” to the impact of climate change.

In an interview with the BBC following the COP21 UN Climate Change meeting in Paris, Cardinal Turkson, who, as president of the Pontifical Council of Justice and Peace, has been promoting the pope’s environment encyclical Laudato si’, reportedly said:

“This has been talked about, and the Holy Father on his trip back from the Philippines also invited people to some form of birth control, because the Church has never been against birth control and people spacing out births and all of that. So yes, it can offer a solution.”

While the BBC reported that Cardinal Turkson was “at pains to stress that artificial birth control methods such as the contraceptive pill were still beyond the pale as far as the Church was concerned,” the interview has led to confusion and garnered strong reaction.

Several outlets picking up on the story have taken issue with the cardinal’s comments, some arguing they are fodder for proponents of population control.

On Thursday, Aleteia spoke with Cardinal Turkson for clarification.

He said the headline “is more exciting than the content itself” and “it’s not what happened.”

The Ghanian cardinal recognized that, to the mind of the English-speaking world, “birth control” generally means some form of artificial contraception, and he therefore acknowledged the need to be more careful with his words.

“But in responding to a question that contained the expression ‘birth control,’ my intention was to present the Church as not inimical or opposed to the idea of spacing births,” he said. “The issue the Church has always had with this is method, how you do it? But the pope used the unfortunate expression of ‘breeding like rabbits.’”

He said what the Holy Father had advised on his trip back from Manila, after visiting slums with many children who were uncared for, was that “responsible parenthood would be useful” for people there.

“In the BBC interview, the reference to ‘birth control’ is actually a way of formulating the Church’s traditional teaching on responsible parenthood,” he reiterated.

10. Married love … requires of husband and wife the full awareness of their obligations in the matter of responsible parenthood, which today, rightly enough, is much insisted upon, but which at the same time should be rightly understood. Thus, we do well to consider responsible parenthood in the light of its varied legitimate and interrelated aspects.

With regard to the biological processes, responsible parenthood means an awareness of, and respect for, their proper functions. In the procreative faculty the human mind discerns biological laws that apply to the human person. (cf. St. Thomas, Summa Theologiae, I-II, q. 94, art. 2)

With regard to man’s innate drives and emotions, responsible parenthood means that man’s reason and will must exert control over them.

With regard to physical, economic, psychological and social conditions, responsible parenthood is exercised by those who prudently and generously decide to have more children, and by those who, for serious reasons and with due respect to moral precepts, decide not to have additional children for either a certain or an indefinite period of time.

Responsible parenthood, as we use the term here, has one further essential aspect of paramount importance. It concerns the objective moral order which was established by God, and of which a right conscience is the true interpreter. In a word, the exercise of responsible parenthood requires that husband and wife, keeping a right order of priorities, recognize their own duties toward God, themselves, their families and human society.

From this it follows that they are not free to act as they choose in the service of transmitting life, as if it were wholly up to them to decide what is the right course to follow. On the contrary, they are bound to ensure that what they do corresponds to the will of God the Creator. The very nature of marriage and its use makes His will clear, while the constant teaching of the Church spells it out. (cf. Second Vatican Council,  Pastoral Constitution on the Church in the World of Today, nos. 50- 51)

To read Pope St. John Paul II’s Wednesday general audience on responsible fatherhood and motherhood, click here. And for more on the fully human meaning of the development that the Church proposes, see Pope Benedict XVI’s Caritas in Veritate, n.15.