Juniper Boughs, the Donkey and the Holy Family 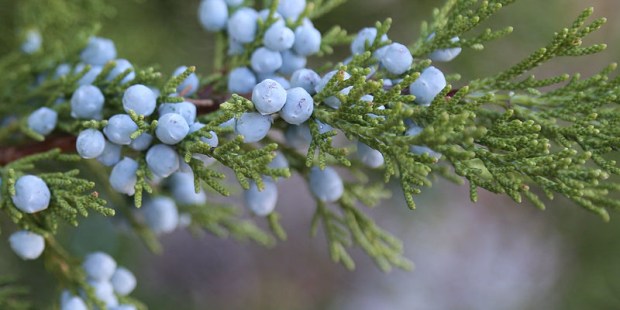 A rough, sticky and cleansing botanical comes to us in some liturgy and some lore

A couple of Scandinavian countries have delightful customs. In Norway on Christmas Eve, a bowl of porridge is left in the barn for the Nisse, a gnome that protects the farm and its livestock.

In Finland, sheaves of wheat are tied to branches for birds to eat during Christmas. Another tradition, not just in the Scandinavian countries, is the sprinkling of bird seed on the front step. If all the seed is eaten by nightfall, goes the tale, the family will be blessed throughout the coming year.

The wreaths, swags and garlands we use to decorate our homes and churches are made from several kinds of evergreen boughs, each having its own symbolic meaning: fir, a lifting up; cedar, incorruptibility; spruce, hope in adversity. One evergreen that has special meaning at Christmas for farmers is the juniper. Throughout Europe swags can be found hung on stable and barn doors, and boughs are sometimes tied to wagon tack of burros.

The genus Juniperus in Christian history and art, symbolizes protection; their branches are prickly and harsh, and the aromatic sap at the tips of the needles can for some folks cause a rash. The juniper was an essential element in early monasteries. Their branches were used in the asperges of the congregation because of the abundance of holy water held by its needles, and its symbolism evoked a sense of further protection within the blessing. Their branches were also burned as incense and used medicinally for its anti-bacterial properties.

There is a legend about the giant juniper tree, Juniperus thurifera, a massive native tree in the Holy Lands, with its role in the safety of the Holy Family. We recall that day on December 28, the Feast of the Holy Innocents.

The tale begins with soldiers pursuing Joseph, Mary and the baby Jesus. Frightened by Herod’s men in close pursuit, the donkey upon which the Holy Family rode turned and at nearly full gallop headed toward the giant juniper. Miraculously, the tree opened up its branches like arms and enfolded them. There, in the shadows of the tree, they were safely hidden from the pursuing soldiers. In gratitude, Mary gave the tree her blessing, and some say Joseph, to sooth the trembling beast after the soldiers had passed, brushed the sweat from the frightened donkey with a juniper branch.

The origin of the story is unknown, but the rural custom still exists today in America: on Christmas morning farmers hang juniper boughs — tied with dark red cords, symbolic of the blood of Christ and the Holy Innocents — on the doors of stables and barns.

Margaret Rose Realy is a Benedictine oblate and the author of The Catholic Gardener’s Spiritual Almanac. If you would like to learn more about Christian symbolism of evergreens, view a summary of them at her blog.