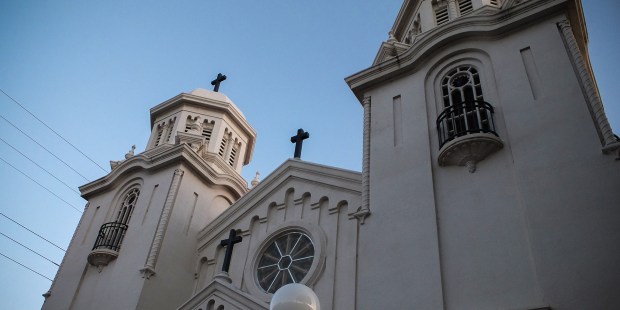 Americans are more fearful about the likelihood of another terrorist attack than at any other time since the weeks after Sept. 11, 2001, the New York Times reports.

So it’s no surprise that Catholics attending Mass in Las Vegas would be rattled by an intrusion of young men who claim to be former Muslims.

The Diocese of Las Vegas confirmed Wednesday that there have been multiple disturbances at several of its properties, and they have been in communication with police about the protests.

The group includes members who identify themselves as former Muslims. But the men were not threatening Mass-goers with jihad. The group, Koosha Las Vegas, warned Catholics that their religion was false and that their “idol worship” was jeopardizing their salvation.

“Based on the information that the protestors have distributed, this group appears to be a Christian group trying to disrupt Catholic services,” a spokesperson for the diocese told Aleteia.

According to KTNV, Koosha Las Vegas has been entering churches, shouting that those present need to repent and filming the acts and posting them on the Internet. Parishioners told KTNV’s Action News that their entry into churches has made them fear for their lives.

The group also protested outside Bishop Gorman School on Dec. 2, with one man shouting, “If you look at the catechism of the Catholic church and you look at Scripture, you know why God hates this religious system.”

Las Vegas police told Action News that that the group did not appear to be related to any terrorist threat. They also said no arrests were made because no crime was committed.

Bill Donohue of the Catholic League for Religious and Civil Rights disagreed.

“The First Amendment to the U.S. Constitution guarantees religious liberty,” Donohue said in a statement. “If that means anything, it means that people of faith must be free to practice their faith. Moreover, these Nazi-like tactics are prohibited by the Nevada Constitution, the second ordinance of which reads as follows: ‘That perfect toleration of religious sentiment shall be secured, and no inhabitant of said state shall ever be molested, in person or property, on account of his or her mode of religious worship.’

“There are also laws against trespassing, as well as hate crimes statutes,” Donohue concluded.