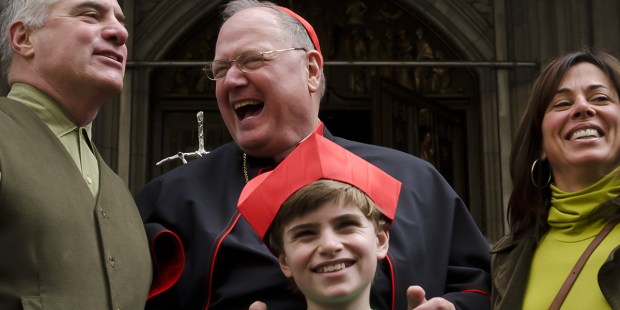 Jeffrey Bruno
Images from of Cardinal Dolan announcing the commencment of the renovation and restoration of St. Patricks Cathedral.
Share
Print
Kathleen N. Hattrup - published on 12/14/15

When families and priests get together, both benefit

Pope Francis wants his priests to smell of their sheep.

It’s an appeal the pope is serious about, as he’s made it more than once (see here and here); he reiterated the same idea with different words in the States when he told bishops they need to “waste time” with the families they serve.

But for pastors to be able to take on the odor of their flocks, the sheep have to let them in.

A priest-friend of mine from up north wrote me some weeks ago to ask if he could thaw out for a few days with my family in south Texas. I immediately gave an enthusiastic yes, even though, save a few moments of conversation at a dear friend’s funeral, I haven’t had contact beyond Facebook with this man for 20 years. But we spent a summer in the trenches together in a demanding catechesis ministry when he was a seminarian and I was in college, and like veterans who never lose their common bond, I consider him a treasured friend. As I welcomed the visit, my first thought was on the benefits for my young children.

My oldest, age six, quickly confirmed my sense that it would do them much good to see and interact with a priest up close. I’d told the kids we’d get to have Mass in our house and some days later, my son says to me, “Mom, I’m excited about having Mass here. Does that mean we’re going to have the Body of Christ in our house?” “Well yeah, honey,” I told him, “that’s what happens at Mass.” “So can I have some too?” he shot back mischievously, disappointed when I answered that he’d have to wait for April for his First Communion.

But we weren’t many hours into the visit before I started considering the benefits redounding to Father — my family, with four rambunctious little ones and an elderly grandmother with Parkinson’s — has plenty of sheepiness about it. When Father quoted the pope’s line, I figured that meant he was seeing the benefits too. His comment that he would begin his homily this Sunday, saying, “Parents of young children, God bless you!,” implied he was soaking in a deepened awareness of the daily lives of his flock.

Our attempts at reminiscing about the old days were invariably interrupted with a toddler request delivered at shriek pitch, or a preschool story with all its minutiae, or my own “just a sec” as I scampered after the infant to intercept a fistful of pine needles headed straight to the mouth.

Father’s graciousness smoothed over any bits of annoyance he must have felt at times, and as the whole quartet — eager to see what entertainments he might have on his iPhone — smothered him like a pile of kittens, it seemed he was settling into the role of a kind uncle with a super power: His visit comes complete with the Body of Christ.

There’s no avoiding the smell of the sheep in a house like this. These are the kinds of days Pope Francis must surely have in mind and that he must have lived himself. It is the convivencia with family that has enabled him to incorporate a two-year-old’s endless “whys” into a lesson about asking the Father to turn his face toward you when confronted with the suffering of innocents, or to reference the slobbery kisses of those with certain disabilities.

When the pope in Philadelphia called on pastors to “waste” time with families, he turned his thoughts to a prayer, asking that God grant the “gift of a renewed closeness between the family and the Church.”

“Families need it,” he affirmed. “The Church needs it, and we pastors need it.”

Families do need it. A shepherd’s presence in our pasture meant an abundance of blessings for my husband and me — literal blessings (check out how incredibly beautiful the prayer of “blessing of an automobile” is!) and blessings of the soul. When the kids were finally tucked in after a late evening sibling blow-up, Father offered a bounty of encouragement and a tiny sprinkling of the gentlest of chiding, with the wisdom of a celibate consecrated to God, privy to so many lessons in humanity gleaned within the walls of the confessional.

And pastors need that closeness too, as Father allowed us to see. It’s easy to be lonely in the priesthood. When I asked him for input on listicles Aleteia is preparing on gifts and ways to show appreciation for your priest, he admitted that it’s hard to find diversions that are healthy for mind and body. Sure, one can whittle away an hour or two playing a game on the iPad, but that doesn’t recharge the soul. Invite him with your family to an amusement park, Father proposed as a gift idea, so he can ride the rides with the kids. “Do you at least get lots of invitations to dinner?” I asked. “Oh, not so many,” he replied diplomatically.

Pope Francis wants a priest to be close to his sheep, in their midst, where he can watch over “the dreams, the lives and the growth of his flock.” But that exhortation can only come with the complementary one: “Dear lay faithful, be close to your priests with affection and with your prayers, that they may always be shepherds according to God’s heart.”