Jean Vanier, L’Arche Founder: “The Most Rejected Lead Us to God” 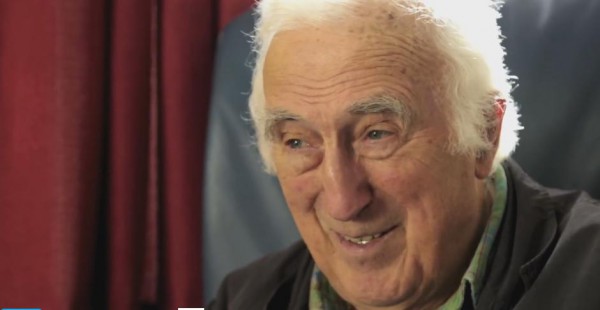 An exclusive Aleteia interview with a most remarkable man, who lives and works among “people of the heart”

“In those who are the weakest you touch the whole mystery of the incarnation of the body. Relationship is through the [corporeal].”

Jean Vanier is now 87 years old, and he continues to write and give retreats. As the founder of the L’Arche network of communities, which house and advocate for the intellectually disabled, he has been an inspiration to people of goodwill and a mentor to those who feel called to establish similar networks of nurturing and support distinct to their localities.

His is a face that radiates kindliness and peace and what seems like a measure of amusement as regards to our mortal coil.

Recently, Vanier agreed to meet with me for an exclusive interview in which he looks back on the founding of the L’Arche community — and the past institutionalization of people with physical or developmental disabilities — and shares how living with the disabled has influenced his faith and his understanding.

“I eat with the people of the home. They are sometimes a little bit crazy, but they have the freedom to be crazy. Most people are not allowed to be crazy,” he says, “so we sit together and we have a good time.”

Encountering the disabled in stressed circumstances, remembers Vanier, became the catalyst for his movement. “I visited an institution where there was a lot of violence; closed up, no work. There was nothing I could do except take two people. And we lived together, we had fun and it grew. I can’t say it was [a plan or] vision, but gradually I discovered that people with disabilities were the most oppressed group, [and that] the most rejected lead us to God.”

Vanier says people with disabilities have a mission to the church, and to the world, and that they can be found at the peripheries, where Pope Francis urges the church to be. They have something to say, he insists, to a world wrapped up in what he calls “the culture of ‘winning,’ cultures of performance, and individual success.”

Part of Catholicism’s New Evangelization involves outreach to people who have felt distanced and pushed away, or prevented from full participation in the life of faith. “There is a universal movement of truth, of meeting people, and the pope is just announcing that [the mission] is not to ‘protect’ the Catholic Church but to help people to meet each other [in our differences]. So this is a good moment.

“The pope speaks a lot about tenderness and this is … looking at people without judgment, listening to them to receive who they are not just the words, to receive, to touch people … the world is moving from the idea [that says] ‘I must be more powerful than you.’”

It is not power, argues Vanier, but humility and simplicity that will urge us toward heaven. “I don’t think there is a big difference between compassion and prayer,” he says. Referencing Christ’s words in the Gospels, he continues, “‘Blessed are you, enter the kingdom, which is being prepared for you since the foundation of the world, and you gave me water when I was thirsty. Everything you did to the least …’ so the mystery of God is the mystery of compassion, and ‘communion’ is meeting Jesus, and to meet him in the work of the poor or to meet him in the Eucharist is the same thing.”

The work to which he has dedicated his life, and which has so influenced his spiritual thinking, seems, to Vanier, to have met its moment in the Jubilee Year of Mercy. “[I]t is something extraordinary. What is important is not necessarily your religion but your capacity to see, in the weakest person, somebody beautiful.”