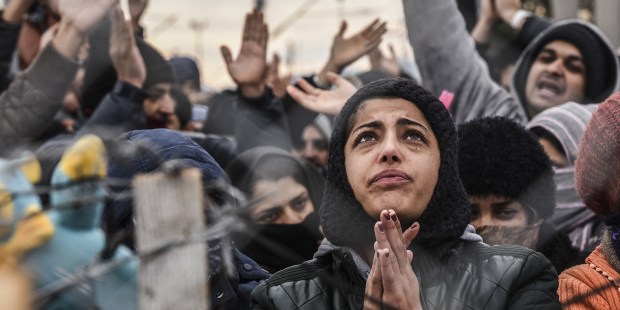 ARMEND NIMANI / AFP
Migrants protest behind a fence against restrictions limiting passage at the Greek-Macedonian border, near Gevgelija, on December 1, 2015.
Since last week, Macedonia has restricted passage to northern Europe to only Syrians, Iraqis and Afghans who are considered war refugees. All other nationalities are deemed economic migrants and told to turn back. Macedonia on November 29 finished building a fence on its frontier with Greece becoming the latest country in Europe to build a border barrier aimed at checking the flow of migrants. / AFP / ARMEND NIMANI
Share
Print
John Burger | Dec 19, 2015

The United States and other nations won’t take them because they do not have refugee status. The people among whom they have taken refuge won’t grant them residency privileges. And nearby countries, where some have gone, won’t allow them to work.

If anyone was ever in a no-man’s land, it’s the 125,000 or so internally displaced Iraqi Christians in northern Iraq.

As the United States prepares to welcome potentially tens of thousands of refugees from Syria’s Civil War, and debate continues over whether the vetting is good enough to weed out jihadists, an international human rights lawyer says it’s important to remember that Christians who fled the Islamic State group in Iraq are still holed up in camps in the Kurdish part of that country.

Nina Shea, director of the Hudson Institute’s Center for Religious Freedom and former member of the U.S. Commission on International Religious Freedom, spearheaded an effort to help Iraqi IDPs resettle in the West. The tens of thousands of Christians who fled Mosul and towns and villages on the Nineveh Plain as ISIS swept in over the summer of 2014 are facing their second winter in Kurdistan.

Shea knows how difficult it is for IDPs to find refuge in the West. She struggled to help an Iraqi Dominican sister get a tourist visa this past spring so that she could testify before Congress about the plight of her fellow Christians in the Middle East.

The 149 IDPs, aged two months to 72 years, come from the Mar Elia church camp in Erbil.  They include a former U.S. military translator, a dentist, a scientist, a lab technician, a mechanic, several farmers and small-business owners. Father Douglas Bazi, himself a former hostage of Islamic jihadists, approached Shea this summer for help in getting his IDPs to a better place.

Shea enlisted the help of others, including security expert Joseph Assad, who vetted the refugees to ensure that none posed a security risk to receiving nations. Shea contacted officials in a dozen or more countries. Most, including the U.S., said no.

It was the small Central European country of Slovakia that finally agreed to accept the Iraqi Christians, after being urged to do so by a key Vatican official who is Slovakian.

Earlier in the year, Pope Francis had spoken about the “genocide” of Christians taking place in the Middle East and asked Catholic parishes and religious institutions in Europe to welcome refugees flooding into Europe. Shea believes that had something to do with the development.

The first group arrived in Slovakia last week, on a plane chartered by Glenn Beck’s Mercury One charity.

From all appearances, it looks like a pretty permanent move. In the first months after ISIS swept in and forced Christians out, there was hope that residents might return after ISIS was defeated.  Christian leaders continued to hope that the Church could maintain a presence in lands where the faith has survived for almost two millennia.

But Shea contends that Christian IDPs in Kurdistan have “dim prospects of ever returning home.” They realize that retaking Mosul would be a difficult task, and even if they were able to get back they would find that in many cases their former neighbors appropriated their homes. Baghdad has not supported the Christian community, and some feel that the emerging geopolitical landscape will have no room for Christian communities.

“Nobody expects these countries to remain countries,” Shea said in an interview. “The former CIA director Michael Hayden said in testimony, ‘Iraq no longer exists, Syria no longer exists, and they ain’t coming back,’ meaning that you’re going to have different borders, there’s going to be a Kurdistan, a Shia area, a Sunni area. But no one in any government is talking about a Christian area.”

Slovakia is the first country to accept a large group of  displaced Iraqi Christians. Four days after Slovakia opened its doors, on December 14,  and after closely observing the Center’s project, the neighboring Czech Republic announced it  too would admit Iraqi Christian IDPs, beginning in January.