The Little Way of Terry Pratchett 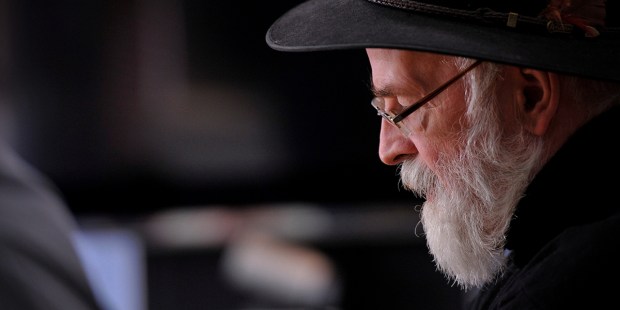 “Discworld” morality lines up surprisingly well with the lessons of St. Therese

Terry Pratchett, the prolific author of the Discworld series (and many other books) passed away this year at the age of 66. Growing up as an atheist, his books offered me some of the strongest, most beautiful visions of living morally, and now that I’m a Catholic, I still love to return to them for their heart, as well as their humor.

Pratchett’s Discworld is indeed flat, carried by four elephants on the back of a turtle, but the people (and dwarves and trolls and werewolves and vampires and whatever the proper term for Corporal Nobby Nobs is) who inhabit it are enough like us that their choices and struggles can light our way.

The Pratchett character I loved best was Granny Weatherwax (start with Wyrd Sisters and head straight for Witches Abroad — my favorite of her books). Granny tends to be an unstoppable force in the books she appears in, taking on con-men, elves, and Death himself, always “sure in her soul that the most terrifying thing in the forest was her.”

But when Granny brings all that power to bear on the world, it’s in the defense of a simple, humble view of what goodness and evil are. In Carpe Jugulum, she winds up arguing about right and wrong with a novice preacher, who is fearful of making absolute statements — committed to seeing all the shades of gray. Granny rebukes him:

“There’s no grays, only white that’s got grubby. I’m surprised you don’t know that. And sin, young man, is when you treat people as things. Including yourself. That’s what sin is.”

“It’s a lot more complicated than that—”

“No. It ain’t. When people say things are a lot more complicated than that, they means they are getting worried that they won’t like the truth. People as things, that’s where it starts.”

“Oh, I’m sure there are worse crimes—”

“But they starts with thinking about people as things …”

Reading that as an atheist, it was the first time I’d seen a definition of sin that didn’t sound like, as Francis Spufford describes our modern use of the word in Unapologetic, a kind of “enjoyable naughtiness” that seemed mostly to do with sex or very expensive chocolates.

But the kind of sin that Granny talks about isn’t an indulgence in something harmless, luxurious and secret. And it’s not the world-shaking evil of a monster or a murderer. It’s a seemingly small rejection of creation and the particular place our fellow people have in it. It’s not always choosing hatred; it can be putting aside love for indifference.

But it’s an insidious sort of error that harms me along with the person I’m rejecting. They’ll be hurt by the way I treat them, but I’m wounded by my self-inflicted blindness. I’ve robbed myself of the chance to see the other person as God does, and to love them in his way.

And it’s because Granny (and Pratchett) fight their battles at the scale of soul to soul that the Discworld series could continue so beautifully. There was always another front to the war, always a way people might start thinking of people as things, even after one individual conflict (the legacy of Koom Valley in Thud! or the rediscovery of a dangerous weapon in Men at Arms) had been solved.

People as things is where it always starts, and Granny would be quick to agree with Aleksandr Solzhenitsyn that her life would be easier if …

“If only it were all so simple! If only there were evil people somewhere insidiously committing evil deeds, and it were necessary only to separate them from the rest of us and destroy them. But the line dividing good and evil cuts through the heart of every human being. And who is willing to destroy a piece of his own heart?”

At the scale of a human heart there’s a limit to what Granny can solve with magic. Despite her powers, her victories are won “with skin.” And none of them can be permanent, or else she’d have wound up treating the person she’s saving as just another thing to be carefully mended and put aside.

Instead, the work that is left to Granny, and to all of us, more closely resembles St. Therese of Lisieux’s advice to “miss no single opportunity of making some small sacrifice, here by a smiling look, there by a kindly word, always doing the smallest right and doing it all for love.” In the moment, Pratchett’s heroes are a little more curmudgeonly than Therese, but they keep doing the next right thing: refusing to discard others or see them as things.

In his wonderful Discworld series, and through his creation of fiercely moral characters like Granny Weatherwax, Terry Pratchett gave us a chance to let ourselves out of the cages we construct for ourselves.

We join Granny, Sam Vimes, Polly Perks and so many others in building a better world by becoming better people one reader (and friend) at a time.

See the little angels rise up, rise up …

Leah Libresco is the author of Arriving at Amen: Seven Catholic Prayers That Even I Can Offer and writes about Catholicism for Patheos at Unequally Yoked.