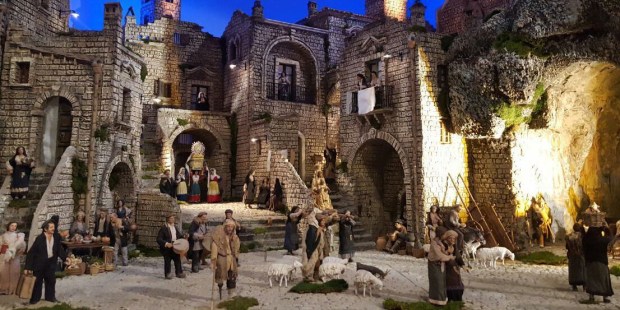 Creating a Nativity scene is “like carrying forth a mission,” says the artist

“Immediately after the death of my father, my parish priest invited me to build a nativity scene for the parish, so I suggested: ‘Why don’t we create something that transmits our life as country farmers through the mystery of the Nativity?’ That was the first nativity scene I created in Grassano in 1976.”

Some 35 years later, the nativity scenes of Francesco (Franco) Artese have traveled the world. In 2012 he designed the crèche in St. Peter’s Square, and this year he returned to New York (32 years after he began) to St. Patrick’s Cathedral, where his manger scene is on display until January 6.

The set design is inspired by the landscape of Sassi di Matera, the ancient cave dwellings in the Italian city of Matera in the southern region of Basilicata. The figurines (numbering around 70, fashioned of clay, and 11 inches high) were developed and designed by Artese, drawing upon photographic and pictorial representations of the Lucan rural world of the 1930s.

“Through my work, I try to transmit emotion and pass on those values which are typical of rural areas of our regions, but which today are so rare: like humility, simplicity, neighborhood and family.”

The environment is that of ancient Lucan rural civilization, the “civilization of hands” based on field work and ancient crafts, marked by diligent hard work and frugality, by a humanity thoroughly pervaded by a spirit of sacrifice and a sense of the sacred and religious.

The Nativity in New York is made entirely of polystyrene and is covered with a layer of stucco resin to give it a tufa effect. It is furnished with elements in metal, wood and terracotta. It extends for about 20 square meters and reaches a height of about 3.5 meters.

It’s set for effect, but “fundamentally it remains in my view the ‘scene,’ which represents the mystery of the Nativity of Jesus.” It transmits “a universal meaning of peace and serenity, and an affirmation of values such as family, solidarity and closeness of the peoples, beyond the creed and faith of those who approach the crib.”

The backdrop of the Nativity scene is the “Crypt of Original Sin.” The most ancient and richest testimony of southern Italian cave art, it has been called the “Sistine Chapel” of cave wall painting.

Artese reproduced several frescos depicting the theme of Creation and the Original Sin in the Crypt, and the three apses depicting a triptych of the apostles, the archangels and the regal image of the Blessed Virgin Mary.

The manger scene also features a series of paintings representing various moments of everyday life, which draw upon images taken from the rites and traditions of the rural culture: the representation of the “Maggio of Accettura,” with a team of men and oxen, dragging the trunk of a large turkey oak tree.

It also features a procession, the image of popular devotion to the Virgin Mary, the Black Madonna of the Holy Mountain of Viggiano, Queen of Basilicata, whose statue is carried on the shoulders of rural men from the mountain to the country and back again during the months of September and May. Following behind are women carrying candle compositions on their heads like votive offerings.

An immigrant family stands out as a tribute not only to Italians but to all those who crossed the ocean in search of work. It also bears witness to the drama many families face today.

Among Artese’s figurines, one is never missing: a little old lady. “She represents my mother, whose loss was very painful for me. In the most delicate moments of work, I always feel her beside me, supporting me.”

Artese’s manger scene is not a representation of the original moment of the Christian event but the eruption of a promise of salvation here and now. The staging of the Nativity renews the mystery of the incarnation in time and history. It is a remembrance of the past but also a possibility for the present. It is a symbol both religious and human, of compassion, tenderness, solidarity, sharing and peace.

“Creating a manger scene, for me, isn’t only a work of art. I am a man of faith, and in my own little way I seek to bring alive that night in Bethlehem, following the message of St. Francis, by seeking to reawaken those hearts that have fallen asleep and to lead them to have a nativity scene in their own home. Creating Nativity scenes is somewhat like carrying forth a mission.”

Translation from the Italian by Diane Montagna of Aleteia’s English edition.