Flight Into Egypt: The Grain Miracle 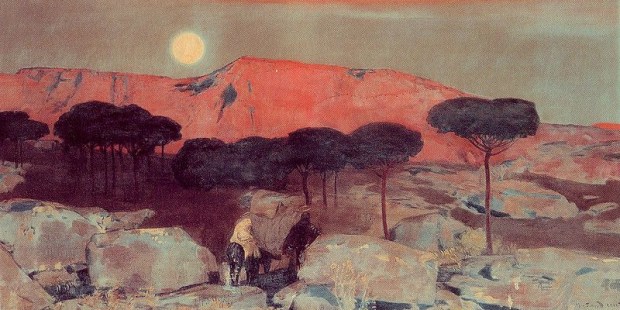 A story from medieval folklore

In today’s reading of the Gospel of Matthew we are horrified by Herod’s fear, and the murder of baby boys.

This is the second-hardest Bible story to work through with lectio divina, the first being the torture and crucifixion of Jesus.

To ease the reality of cruelty — whether biblically-based or brought to us via the evening news — I look for goodness to balance the ugliness. I try to find simple miracles or everyday heroes associated with the event. Someone on the edges of a situation who is called into action, unaware of the profound efficacy of their “yes.”

What I found to ease the narrative of the Holy Innocents were miracle stories that have been handed down to us, small assists to the Holy Family on their flight from Bethlehem, such as this fable of their having hid under juniper boughs, and the tradition it brings to so many rural families.

Here is another story from medieval folklore that ties the memorial of the Holy Innocents with the Epiphany, January 6, and the traditional date of February 17, when we commemorate their flight into Egypt. It is the story of the Grain Miracle.

Not long after the presentation of Jesus, and after the three wise men had departed, Joseph dreams that Jesus’ life is in danger. Having learned to trust these dreams, he rallies his wife with their infant son, loads the donkey and leaves Bethlehem that very night.

Herod’s rage at being deceived by other kings, and his fear of being dethroned, causes him to command that his soldiers hunt down and kill every male baby in Bethlehem and the surrounding countryside. As the story unfolds, the Holy Family’s flight to Egypt has been detected, and the murderous band is rapidly closing the distance between them.

The Blessed Mother sees a man in the act of sowing seeds, and — confident God will give her a miracle — instructs the farmer that if soldiers come looking for her and her family, he should tell them that he saw them pass by while he was sowing. Immediately after Mary, Joseph and the infant depart, the startled farmer watches as the freshly sown seeds sprout and grow tall.

When the soldiers arrive and ask the farmer if he had seen a mother and child pass by, he truthfully answers, “Yes, when I first began to sow the seed.” The soldiers, assuming the seed had been planted months earlier, are disgusted by the farmer’s obvious idiocy; they go away and head in another direction.

We know the rest of this story. The Holy Family made it safely into Egypt, and after Herod’s death, into Nazareth, where Joseph set up shop with his young son and Mary mothered the Christ.

The beginning of the greatest love story ever told is marked by cruel injustice, but also miracles. And “the last enemy” is death, defeated. There is nothing to fear.

Of Related Interest:
Rosemary in the Lives of Jesus, Mary and Joseph

Margaret Rose Realy is a Benedictine oblate and the author of The Catholic Gardener’s Spiritual Almanac. If you would like to learn more about Christian symbolism of evergreens, view a summary of them at her blog.