The Church and the Jews, and Why We’re Misunderstood 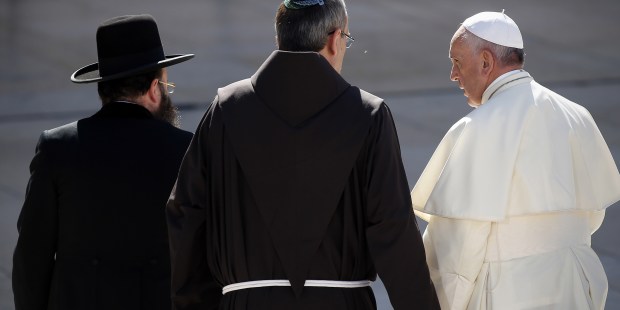 We should get points for trying. That’s only fair. The Church’s theological statements should be scored the way diving is scored at the Olympics, with the basic score multiplied by the degree of difficulty. Because theology ain’t easy, especially when you’re the Catholic Church and you do your theology in public, and you feel called to take up some delicate and subtle questions.

Evelyn Waugh once said that when he saw what another writer did with the English language, he felt as if he were looking at a priceless vase in the hands of a chimpanzee. It may be a little unfair (though actually probably isn’t) to feel that way when you see theology in the hands of the major media. Like every other form of advanced thought, from physics to rhetoric, everything depends on careful distinctions between two things that may look alike to the outsider. If the outsider is a reporter on deadline and mindful of how drama gets readers, there will be problems.

There’s a pattern now: Church issues statement; world’s press explodes with dramatic but inaccurate stories, usually created by ignoring the statement’s careful distinctions; Church’s enemies gloat and lots of her friends and her people get upset; a few people try to say “No, what the statement said is …” but get drowned out; indignation and outrage continue; cooler heads eventually half prevail and some people calm down; others, however, remain outraged; those who calmed down claim that the whole mess was still the Church’s fault for not being clearer or not waiting longer to publish or for not hiding the statement.

At the moment, after the publication of the new statement on the relation of Christians and Jews, “The Gifts and the Calling Are Irrevocable,” we are at the few people trying to say “What the statement said is” stage. It’s a 10,000 word statement, explicitly issued as a reflection — not, in other words, a dogmatic declaration — intended to help Catholics and Jews talk about the relation of their two faiths, which the Church believes are in a deep sense one faith. It takes up what the head of the congregation for the doctrine of the faith called “the thorny issue of how to understand the fact that Jews are saved without believing explicitly in Jesus Christ as the Messiah of Israel and Son of God.”

And absolutely predictably, the headlines duly appeared. The New York Times, for example, our newspaper of record, declared “Vatican Says Catholics Should Not Try to Convert Jews.” Religious sources tended to run with that line or a headline declaring that the Church now says Jews don’t need Jesus.

And you find yourself saying, “What the statement actually says is …,” and probably not getting a hearing. But really, the statement is just jolly obvious. The paragraph to which the headlines refer (number 41 out of 49) begins by noting that the question is a very difficult one for both Jews and Christians. Then come the sentences that got all the attention:

The Church is therefore obliged to view evangelization to Jews, who believe in the one God, in a different manner from that to people of other religions and world views. In concrete terms this means that the Catholic Church neither conducts nor supports any specific institutional mission work directed towards Jews. While there is a principled rejection of an institutional Jewish mission, Christians are nonetheless called to bear witness to their faith in Jesus Christ also to Jews, although they should do so in a humble and sensitive manner, acknowledging that Jews are bearers of God’s Word, and particularly in view of the great tragedy of the Shoah.

The newspapers got the story significantly wrong, because the writers stomped through the crucial distinctions the way a child runs over an ant hill or the way a friend cooking dinner once substituted ketchup for crushed tomatoes because he honestly didn’t see the difference. (The result was vile. Oh, gosh, it was awful.)

There’s not much the Church can do, without dumbing down her statements, which would defeat the purpose of making them in the first place. “The Gifts and Calling are Irrevocable” is full of assertions like “Christians are nonetheless called to bear witness to their faith in Jesus Christ also to Jews.” It couldn’t be more obvious about it. Even paragraph 40 begins with the assertion of “the universal salvific significance of Jesus Christ and consequently the universal mission of the Church.” And the reporters and critics and even many Catholics missed the point anyway.

The Church should get credit for trying and a score multiplied by a very high degree of difficulty. It’s a point in her favor that she keeps exploring these questions and sharing her thoughts in public, even knowing that the world is going to get them wrong and some people will use that mistake to attack her. It helps that she has a sense of history and a confidence that the gates of hell will not prevail, and that these squalls will blow over and the truths she has tried to share with the world will remain.