Why We Still Read Belloc 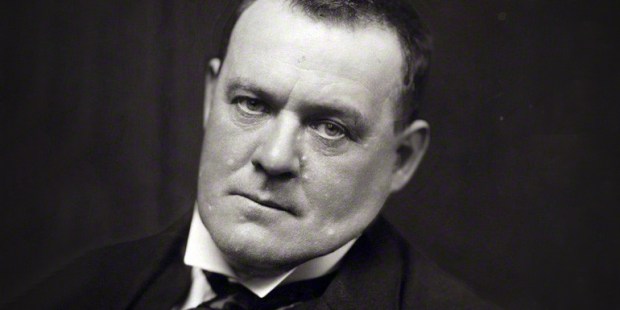 For people with an appreciation of Europe’s Christian roots, he matters

Chatting with a British bishop who’d said the famous Catholic writer Hilaire Belloc sometimes came to his home when he was a child to visit his father, a friend, I asked the obvious question: What was Belloc like?

The bishop didn’t say a lot, but I do remember this: “an old man in a rumpled, stained black suit.” The image has stuck with me, as apparently it did with the bishop.

That would have been Belloc in the last years of his life. (He died in July 1953, just short of turning 83.) He kept writing until near the end — after all, he made his living like that — social criticism plus history and biography of a polemical nature, vigorous and clear but scarcely unbiased.

But the language — ah, the language. Here was Belloc’s great gift. From beginning to end his writing was a model of simple, elegant English prose.

Lately I’ve been reading a pocket-sized Belloc book that I found on the shelf without even knowing it was there. Its title is Hills and the Sea, and it’s a collection of short essays the author published in British popular periodicals early in the last century. First appearing in 1906, the volume was republished (by Methuen) in 1913.

A point of interest in my copy is an inscription on the title page, written when the book was presented to someone as a gift: “For the precious moments just before repose, beauty and adventure here at hand in Belloc’s unsurpassable prose.”

And here, virtually at random, is a specimen of the writing that earned that effusion:

“There was no breeze in the air, and the little deep vessel swung slightly to the breathing of the sea. Her great mainsail and her balloon-jib came over lazily as she swung, and filled themselves with the cheating semblance of a wind. The boom creaked in the gooseneck, and at every roll the slack of the main sheet tautened with a kind of little thud that thrilled the deck behind me.”

“That looks pretty easy,” you say? Try doing it, my friend, and you may think differently. Do people still read Belloc? As with many writers who write a lot, his output was a mixed bag. Undoubtedly too he holds no interest for those who imagine European history and European culture began in 1789 with the French Revolution. But for people with an appreciation of Europe’s Christian roots, he matters.

Readers who wish to tackle Belloc a little at a time will find a helpful introduction in The Essential Belloc, a compilation edited by Father C. J. McCloskey, Scott J. Bloch and Brian Robertson and published by St. Benedict Press.

His unquestioned masterpiece remains The Path to Rome, a rambling account of a journey — a pilgrimage, really — that he made, largely on foot, in 1901 through the heart of the Old Continent to the Eternal City. What is the book about? The answer, you might say, is whatever pops into the writer’s head. But on a deeper level, its subject is no less than the Christian soul of Europe.

The ideological ideal of today’s vision of a secularized Europe requires the creation of a uniform continental identity from which national identities and religious identity have been erased. By contrast, Belloc’s writing is full of glimpses of the Europe that was — Christendom — presented in inimitable prose and well worth cherishing even now. In the long run, history will declare the verdict among Christendom, a secularized European monolith and … an Islamicized entity now perhaps starting to emerge.

Russell Shaw is the author or coauthor of 21 books and numerous articles, columns and reviews. He is a member of the faculty of the Pontifical University of the Holy Cross in Rome and former secretary for Public Affairs of the United States Conference of Catholic Bishops.