Grace Upon Grace in the Womb of the Church 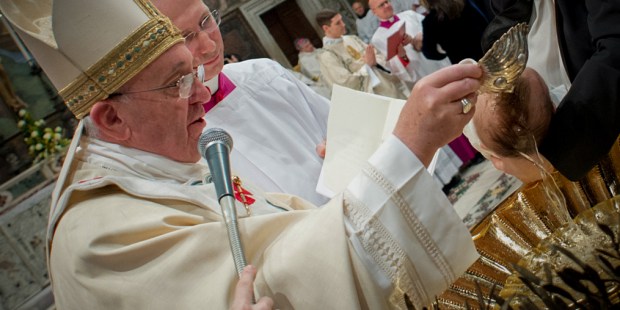 We recall the poignant words of Saint John XXIII when, opening the (Second Vatican) Council, he indicated the path to follow: “Now the Bride of Christ wishes to use the medicine of mercy rather than taking up arms of severity.”

Carried tenderly through the Jubilee Door of Mercy at the Basilica of the Immaculate Conception by her parents, 10-day-old Grace Philomena would be baptized in just a few hours on this same special day — the Feast of the Holy Family in the Octave of Christmas during the Jubilee Year of Mercy.

Grace. God’s favor and unmerited gift. A perfect name for a baby conceived in an imperfect situation by unmarried young adults; yet a child welcomed, wanted, loved by God and by us. Moreover, a child soon to be infused with the grace of God, giving her the one identity that truly counts: child of God.

Standing in the crypt of the National Basilica, it was hard to miss the sense of being in the womb of the Church, the womb of the Bride of Christ, the womb of Mercy. I pondered the paradox of the God-man choosing to enter this world in an irregular and apparently scandalous situation, conceived in the womb of unwed mother, subject to stoning according to the demands of the law. Why that way, Lord? I have asked the question many times. I thought of Mary’s dilemma, about how difficult it must have been as she wondered how her situation would play out. I thought of all the months I worried about and prayed for Grace, asking God for his help that this situation too might play out well.

Then came Grace, on the birthday of Pope Francis — the pope who baptized the baby of unwed parents on the Feast of the Baptism of Jesus. And here we now stood on the Feast of the Holy Family holding Grace hours before her baptism, with grace holding us.

The last Gospel reading of the year proclaims: “From his fullness we have all received, grace upon grace; for the law was given through Moses, grace and truth came through Jesus Christ” (John 1:16–17, Revised Standard Version). While the law was a teacher, grace is a healer. The law was a guide, but grace is a mother. The law foreshadowed Christ; grace gives us Christ. Grace welcomes Grace, making her a child of God “born not by natural generation or by human choice nor by a man’s decision but of God” (John 1:13).

“Were sin the only thing that mattered, we would be the most desperate of creatures,” Pope Francis said in his opening homily for the Jubilee Year of Mercy. “But the promised triumph of Christ’s love enfolds everything in the Father’s mercy.” That enfolding comes in many forms — all destined to beckon us to God.

I’ve watched an unborn baby call two confused young people to adulthood: to purpose, to promise, to love with commitment to chastity.

I watch them now as they hold an infant daughter in their arms, presenting her to the Father of Mercies that she may be enfolded in his love. The law would have repudiated Mary. But grace embraces Grace, and her parents, with the medicine of mercy. The arms of severity have no place here, only the arms of love.