All That is Visible and Invisible 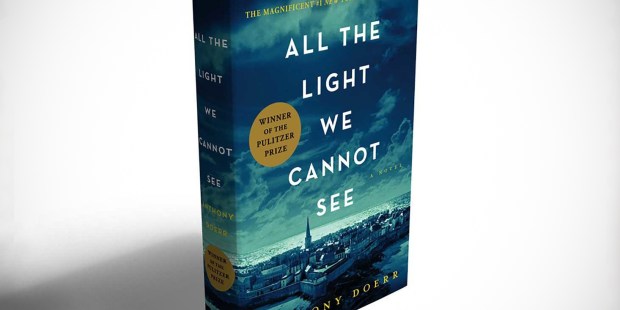 Anthony Doerr’s All the Light We Cannot See, which won the 2015 Pulitzer Prize and has spent more than 80 weeks on the New York Times best-seller list, is one of the most beautiful and finely crafted novels I have ever read. His language is spellbinding, even incantatory, and the intertwined narratives that he composes are deeply involving. Doerr delicately weaves the stories of Marie-Laure LeBlanc, a blind French girl, and Werner Pfennig, an albino German boy, which unfold during the awful years of the Second World War.

Due to his technical brilliance, Werner is assigned to a Hitler Youth training camp for the best and brightest in the Reich. There he becomes a master at detecting and interpreting radio signals. Marie-Laure is spirited out of Paris by her devoted father when the Nazis overwhelm northern France, and she is transported to the mysterious and enchanting seaside city of Saint-Malo, where she takes up residence with her great-uncle, who had not left his home since returning from the First World War.

In time, Werner is sent to the eastern front. Using his exquisitely honed skills, he tracks down radio signals that are being sent from Russian resistance fighters. Once he finds the source of the communication, he sends his brutish and gigantic colleague to kill the sender.

The combination of brains and brawn makes them an extraordinarily effective team. Marie-Laure, with the help of a miniature model of Saint-Malo, constructed by her father, makes her way in darkness all around the medieval town and to the seashore. Her great-uncle reads to her and lights up her imagination. One day he introduces her to a radio transmitter that is hidden away in an attic, the only access to which is through a panel behind a wardrobe.

Eventually she joins the resistance, collecting loaves of bread that contain slips of paper on which are coded messages that can be communicated, through her uncle’s transistor, to fellow travelers all over France. And this is what draws Werner and Marie-Laure together. The Nazis discover that the Resistance is sending communiqués from Saint-Malo, but they cannot discern their provenance — and so they call in the gifted Werner to track down the source. Soon enough, he finds it and is led to Marie-Laure’s home. The two young people have a fleeting encounter, touching hands (almost) through the panel.

The point is that both characters deal, all the time, with the unseen world. Through his incisive intelligence, Werner manages to “see” the invisible waves and impulses that surge constantly through space and time. And through her vivid imagination and keen intuition, Marie-Laure “sees” what her blind eyes are incapable of seeing. Moreover, both characters are associated with the color white: he is albino, and her last name is LeBlanc (the white one). Pure light is white, but when it passes through the prism of our sensation and consciousness, it breaks into a variety of visible colors. Yet there are innumerable aspects and dimensions of that pure white light that are invisible to us: “all the light we cannot see.”

Doerr seems to be arguing that it is incomparably sad if we limit reality to the narrow band of the light spectrum that our eyes can take in. If invisible electrical impulses travel constantly along certain paths, the narrator muses, “is it so hard to believe that souls might also travel those paths? That her [Marie-Laure’s] father and Etienne and Madame Manec and the German boy named Werner Pfennig might harry the sky in flocks, like egrets, like terns, like starlings? That great shuttles of souls might fly about, faded but audible if you listen closely enough?”

When I read that breathtaking passage for the first time, my mind went immediately to the familiar lines of the Nicene Creed: “I believe in one God, the Father Almighty, the maker of heaven and earth, of all things visible and invisible.”

I fully understand why many founders of the modern sciences and many avatars of the Enlightenment had grown impatient with a hyper stress on the world to come and upon certain empirically unverifiable states of affairs, but I do not sympathize with the exaggerated reductionism that holds reality is identical tout court to the empirically verifiable. Notice how, in our common discourse, the invisible is usually equated with the fantastic and the imaginary. Many of the New Atheists, for instance, mockingly refer to God as “your invisible friend.” Well, of course God is invisible, not because he is a fantasy but precisely because he is the unconditioned reality. Anything visible, by definition, is a conditioned or contingent state of affairs. God’s invisibility is a function of his non-contingency, of the unsurpassed fullness of his being. And if God is rightly called “ens realissimum” (the supremely real) by Thomas Aquinas, why could there not be invisible realities that participate in God’s manner of being more fully than visible things?

All the Light We Cannot See, like all great novels, is about many things: love, war, communication, prejudice, memory, etc. But to my mind, the supreme contribution that it makes, through the intertwining stories of two young people caught in a terrible maelstrom, is that both the visible and the invisible are real and that they wrap around one another in powerful ways.

Bishop Robert Barron is an auxiliary bishop of the Archdiocese of Los Angeles and the founder of Word on Fire Catholic Ministries.