Star Wars and the Isle Named for St. Michael the Archangel 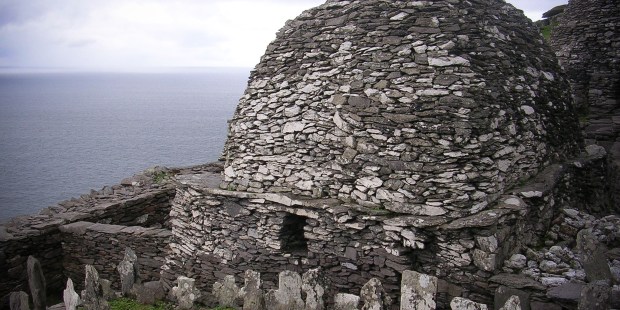 Lent is coming, and the world is counting on us

Did the final scene in Star Wars: The Force Awakens captivate you? Surprisingly, the stunning landscape and ancient ruins were not part of a set constructed for the movie but was an actual island off the coast of Ireland. Even more intriguing is the fact that the ancient ruins seen on film are the remains of a Christian monastery from the sixth century. In this context the symbolism of the final scene is striking and not only highlights key spiritual themes from the movie but also gives us a remarkable meditation on the unseen battle that rages in our world.

While the choice to film on Skellig Michael was principally motivated by the impressive vistas, J. J. Abrams commented, “We were just honored to be allowed to film there. We were as respectful as possible because we knew it was a sacred place.” Whatever their intentions, the filmmakers made a marvelous choice to film there and were able to visualize a location that has spiritual implications both in the movie as well as in real life.

The central plot of The Force Awakens revolves around the search for Luke Skywalker in hopes that he will be able to rise up and save the galaxy. It is mentioned that no one knows where Luke went, and characters generally believe he retreated into seclusion out of shame for his failures.

One possibility characters discuss is that Luke went in search of the first Jedi temple, and the map they find gives them that location. What is interesting is that the movie highlights the need for a “spiritual” response to the evil in the world. They do not seek to recruit more soldiers or build bigger weapons for the Resistance but instead place their hope on an old man who believes “The Force” is real and holds the key to overcoming the “Dark Side.” It is even possible that Luke fled to the first Jedi temple not out of shame but out of a need to renew his own “faith.”

Even Han Solo, who in the original trilogy didn’t believe “hokey religions” could win any battles, now boldly proclaims, “It’s true. All of it.”

What brings all of this together is the coincidental fact that the island they filmed the final scene on was dedicated to St. Michael the Archangel more than a thousand years ago (hence the name Skellig Michael).

The monastery on the island was founded by one of Ireland’s greatest saints, St. Finnian of Clonard, during the sixth century. St. Finnian was taught by disciples of St. Patrick and became an influential teacher inspiring many Irish saints over the years. St. Finnian and the monks who lived on Skellig Michael for centuries were imitating the examples of the Desert Fathers, who retreated from the world to dedicate their lives to prayer, fasting and asceticism. They sought to hold back the tide of Evil in the world by following Jesus’ words to his disciples, “This kind cannot be driven out by anything but prayer and fasting” (Mark 9:29).

What this means for us is that if we truly want to combat the evil forces of today, we need to return to the sources and renew our dedication to prayer and fasting. We need a spiritual response to the darkness that has crept over our world.

Unfortunately, many of our contemplative monasteries have been abandoned and in the process we have lost a vital part of Christianity. John Paul II sought to remedy the situation and established a cloistered convent within the walls of the Vatican. He knew that it was the prayers of these religious who kept the Church afloat during times of difficulty.

Benedict XVI also recognized the vital importance of contemplative prayer and converted that same convent into his own cloister, where he continues to pray for us and the world. There are even some bishops who establish contemplative monasteries in each diocese they are assigned to because they know that they cannot accomplish their mission without their prayers.

While most of us are not called to lead cloistered lives of prayer, we can all do our part in the cosmic drama of salvation. Let us do what we can and renew our dedication to prayer and fasting, especially as Lent quickly approaches.

The world is depending on us.

Philip Kosloski is a writer and blogger. His blog can be found at philipkosloski.com.