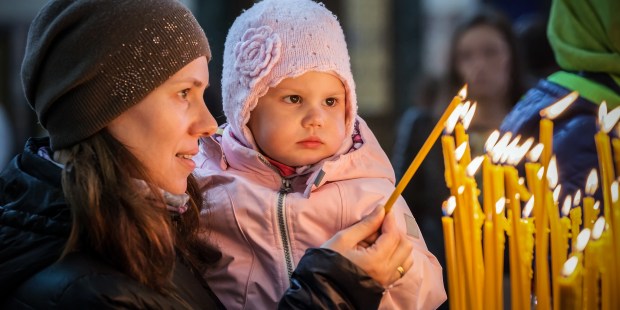 For many converts, open persecution isn’t something that happens in the outside world but at home

Whether members of the JPII generation or millennials who have discovered the faith, young people are coming in to the Church. Their homecoming, however, is not always welcomed by their parents or grandparents.

For many parents of converts, particularly those who grew up in the ’60s and bristle at authority (unless it is their own), their offsprings’ return to the Church can feel like a slap in the face. There is a palpable sense of betrayal: “Didn’t we raise you better than that? You aren’t even pro-choice anymore? And what’s with all these children?”

For many converts, open persecution isn’t something from the outside world but happens at a place they think of as home. Threats of being dropped from the will, cutting off communication and angry standoffs are not uncommon. One set of parents announced to their 24-year-old son who had just joined the Church, “We like the old John better.” And when the topic of religious life or the priesthood arises, parents without faith can be the toughest nuts to crack. One young woman who felt called to life in the cloister could simply not overcome the pressure her parents put upon her as an only child. Another mother, whose son entered the seminary, would rant angrily at his male Catholic friends who were not becoming priests. “Why aren’t they taking you instead of him? He is my only son!” Such outbursts can certainly put a strain upon even the most pious as they try to live out the fifth commandment: honor your mother and father.

Such relationships put young Catholics in the awkward position of trying to not only endure their parents’ displeasure but to also actively help bring their parents back to the Church. As I discuss in my book Nudging Conversions, helping parents return to the faith can be a difficult enterprise because the natural parent-child dynamic is upset. No one wants to feel like her family has turned into Freaky Friday, where the child becomes the mature adult and the parent returns to (or never left) a stunted adolescence.

To face this parental problem, prayer is the place to start. The healthier your own faith, the easier it will be to endure the derision and/or to pass the faith along. Through prayer, the Holy Spirit will also give you insights into what to say to your parents and what to pray for, given their own particular situation. Each person is unique and will have an equally unique journey to discovering God. There are certainly times when relationships can be toxic and boundaries need to be set, and again, this is where the Spirit’s counsel is crucial.

Patience is the second critical tool. The good news is you don’t have to convince your parents of the truth of Catholicism in one sitting. It is a process, like peeling an onion (and yes, sometimes there are accompanying tears). It is easy to become frustrated or irritated with your elders when they act like juveniles: when they are self-absorbed, won’t listen to reason or just want to hang out with their friends or watch a game instead of going to church with you. In fact, it can be really irritating and makes one think, It’s tough to raise good parents these days. Nagging, pestering and fire-hosing (too much info at once) are just not approaches that will work. But steadily loving your parents exactly where they are — warts and all — while planting seeds when possible, goes a long way.

Many adults today have a lot of baggage given the current state of our culture. This can both be good and bad. On the one hand, when people have tried just about everything, sometimes the only thing they haven’t tried is returning to the faith of their childhood, or the Church they never considered before. The hard part, of course, is that with this baggage there can also be a lot of impediments to full communion, particularly in areas related to marriage and divorce. God, however, does not simply smooth over the difficulties but gets to the root of the problem. While it can be painful for everyone involved, there is nothing like the freedom that comes with living in God’s will, freed from the chains of sin.

Sometimes, the very thing needed to transform a parent or grandparent can come from the most unlikely places. I recently heard about a child making her First Communion who, during the rehearsal, innocently asked her grandfather if he would be receiving the Eucharist too. That question changed the elderly man’s life. Why am I not receiving? went through his head over and over again until he realized it was just the culture and his own neglect that had led him away from the Church. He came back to his faith with zeal.

Converting parents isn’t impossible. And no matter their protests, there is simply no better way to honor your mother and father.

Carrie Gress has a doctorate in philosophy from the Catholic University of America and was the Rome Bureau Chief of Zenit’s English Edition. She is the author of Nudging Conversions: A Practical Guide to Bringing Those You Love Back to the Church and co-author, with George Weigel, of City of Saints: A Pilgrim’s Guide to John Paul II’s Krakow. A mother of four, she and her family live in Virginia.