Busted and Broken, Blessed and Reformed 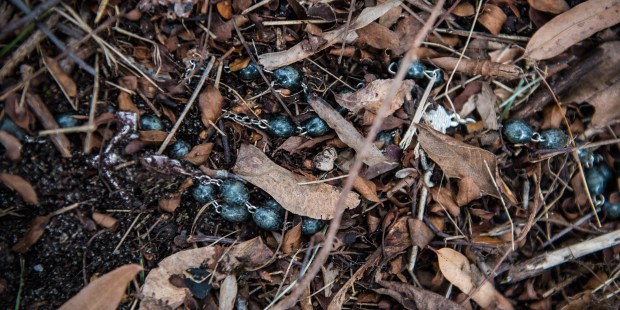 Winter is a good time to clean up garden sheds, sharpen tools and empty out the baskets or canvas totes used during the growing season. As I dumped the debris from one such tote, pieces of a plastic beaded rosary with portions of rusted chain fell into the wastebasket, along with its crucifix and Our Lady of Mercy center still partially attached.

Quite a while back the rosary had been dug out of the ground at a retreat center where I had volunteered as a gardener. Every nook of the narrow cross and triangular center were packed with dirt, pit-marked, and crusty. The beads — plastic pearls — were flaking and peeling. Most of the chain crumbled in my glove as I drew it from roots and weeds.

I was curious how it had come to be part of the soil. Was it a child’s beloved piece lost in error? Had it been casually shoved into a pocket and fallen out? Had it been broken beyond repair, found to be useless and buried — where none would step upon the site — as blessed items ought?

Whatever the cause, it was damaged by years of being ground in the dirt. There was really no value left of its intended use. But still …

I brushed off the soil as best I could and tossed it in the tote with the tools. Now and again I would see in the bottom of the canvas bag a scattering of beads among the dry soil and twigs. I kept telling myself that I should clean out the tote and throw away the worthless remains of what had been this rosary.

Now, looking at it in the wastebasket, I thought the cross was probably blessed, and it just felt wrong — no matter how damaged it was — to so casually discard it to the dump. It should have a more dignified ending than that of a garbage heap.

I plucked the crucifix and center from the waste, pulled off the rusted chain and ran them under painfully cold water trickling from a nearly frozen hose. The medals became more distinctive as I washed. Though pitted and scratched, the damage and wear had made them interesting, given them a story, a history with meaning.

Later, I made some coffee, and as it brewed I pulled a silver jewelry wipe from under the sink and polished the thin crucifix and center. They would never look new again, but I appreciated the pieces all the more because of that. The wear only added to their beauty.

As I touched the roughened surface, I thought of how Our Lord, cleaning away our dirt and debris, renews us each time we enter the confessional. How, as Pope Francis said, “Time and time again [Jesus] bears us on his shoulders. No one can strip us of the dignity bestowed upon us by this boundless and unfailing love” (11/24/13, no. 3—Evangelii Gaudium).

With God’s mercy, our beauty is restored within our pit-marked and damaged humanity. That being so, it seemed to me, the rosary — like us — needed another chance at being all it could be.

Taking the pieces (and the cup of coffee) upstairs with me, I found my rosary-making supplies, and set to work. Sometimes second chances need only our willingness to pay attention and co-operate.

Most of what the rosary was had been damaged beyond restoration. But the heart of the original piece — the medals — still had value, and once renewed, bore its own distinct beauty. Here again, salvaged from decay, new life is given.