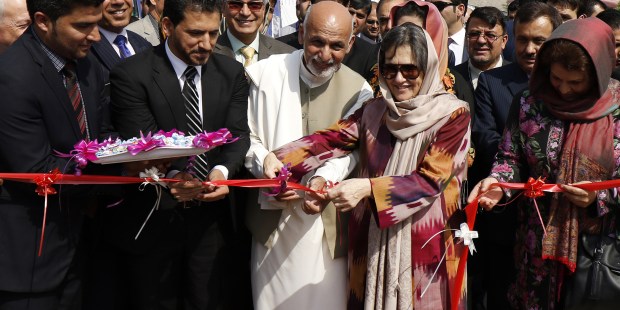 Afghanistan is almost 100 percent Muslim. According to the CIA World Factbook, the Middle Eastern nation has 32.5 million people, 99.7 percent of whom adhere to Islam.

Rula Ghani is part of the 0.3 percent listed as “other.” She is the wife of Afghanistan’s president, Ashraf Ghani. And she is Christian.

Born in 1948 in Lebanon of a Maronite Christian family, Rula Saade studied in Paris and received a master’s degree in political studies from the American University in Beirut. There she met Ashraf Ghani, and the two married in 1975. The Soviet occupation of Afghanistan, and later Taliban rule, kept the couple from settling in his native country. Rula earned a master’s degree from the Columbia School of Journalism in New York, and Ashraf taught at Berkeley and Johns Hopkins and worked at the World Bank.

They moved to Kabul in 2002, when he became Finance Minister of Afghanistan, in the wake of the U.S.-led coalition’s victory over the Taliban. Rula, shocked by the living conditions of many children, went to work for Aschiana, a local organization that helps feed and educate street children, according to the Los Angeles Times.

Ghani succeeded Hamid Karzai as head of state in September 2014.

During the presidential campaign, Ghani’s opponents tried to make his wife’s Christianity and foreign-born status a campaign issue. “After the election, I wanted to end all these fantasies,” she said. “The only solution was to speak publicly. That’s why I accepted the television interviews on national television. Afghans have seen that I spoke Dari [an Afghan language]; I was veiled and dressed decently. I could demonstrate that I knew Afghanistan.”

For his part, Ghani took an unusual step during his inauguration, thanking her during his speech for her work both as a wife and mother and her work for Aschiana. The French newspaper Le Monde called the gesture a “very unusual recognition in a country where women are relegated to menial tasks.”

In 2015, Time magazine included Rula Ghani in its list of the 100 most influential people, noting that she “has a long history of activism” and has ”vowed to work to improve living standards for women in a country where they have historically struggled to be treated fairly.”

“Afghan women have lost the status of people that we respect. Before it was not like that,” she said in a December 2014 interview with Paris Match. But, she lamented, “I do not think I can change things deeply. I’m just a symbol, a reason for hope.”

But her support for women’s rights does not come as an attempt to undermine one of Afghanistan’s most important values, she said in the LA Times interview.

“I have noticed that with some people I speak to progress is [seen as] ‘becoming liberated from the family,’ and that’s not progress, that’s actually creating a lot of dislocation of the social fabric.”

When women take jobs, she said, “they’re not doing that to ‘liberate’ themselves, they’re doing that because they need to, to contribute to their family.”

Her religious background, she added, also is irrelevant. “God created and decided for me to be born in a Christian family. It’s not every day that a Lebanese marries an Afghan. I think God’s hand is also in there.”