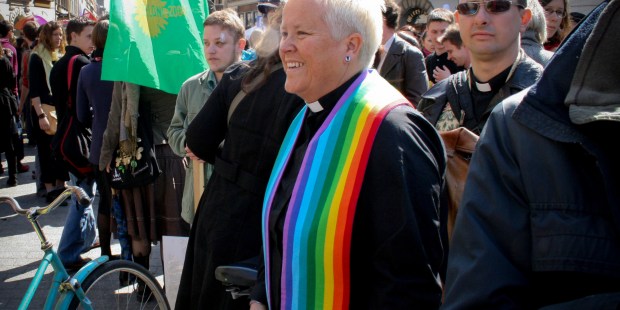 UPDATE, JAN. 15: Presiding Bishop Michael Curry said Friday the U.S. Episcopal Church will not roll back its acceptance of gay marriage despite sanctions imposed this week by Anglican leaders, the Associated Press reported.

The Catholic official who coordinates dialogue with the Episcopal Church in the United States does not expect talks to be suspended by the Anglican Church’s discipline against its U.S. affiliate.

“This does not necessarily mean that the dialogue here in the United States between the U.S. Bishops’ Conference and the Episcopal Church would need to be suspended, because it’s not a dialogue with the Anglican Communion,” said Paulist Father Ronald Roberson, associate director of the Secretariat for Ecumenical and Interreligious Affairs of the U.S. Conference of Catholic Bishops. “It’s very specifically with the Episcopal Church. They don’t claim to represent anyone other than themselves.”

Anglican primates from around the world, meeting in Canterbury, England, were to issue a statement Friday declaring that the branch of Anglicanism in the United States, the Episcopal Church would be suspended from the worldwide Communion for three years because of its decision to allow same-sex marriage. The statement was leaked a day early.

“Recent developments in the Episcopal Church, with respect to a change in their Canon on marriage, represent a fundamental departure from the faith and teaching held by the majority of our provinces on the doctrine of marriage,” the statement said. “Possible developments in other provinces could further exacerbate this situation.”

The traditional doctrine of the church in view of the teaching of Scripture upholds marriage as between a man and a woman in faithful, lifelong union. … For a period of three years the Episcopal Church no longer represent us on ecumenical and interfaith bodies, should not be appointed or elected to an internal standing committee and that while participating in the internal bodies of the Anglican Communion, they will not take part in decision making on any issues pertaining to doctrine or polity.

Father Roberson believes that where the statement says “the Episcopal Church no longer represent us on ecumenical and interfaith bodies,” it would not apply to USCCB-Episcopal Church dialogue. He pointed out that the Episcopal Church is already unable to participate in the international dialogue with the Holy See due to a decision made by then Archbishop of Canterbury, Rowan Williams.

“It remains to be seen how it’s all going to work out,” Father Roberson said of the new sanction.

He said that any reversal of the church’s decision to allow same-sex marriages, which came with a vote by the church’s General Convention last summer, would probably need another vote by the same body.

Father Dwight Longenecker, a former Anglican priest who became a Catholic and now pastors a church in South Carolina, called this week’s decision ”significant and historic.”

“What we’re seeing here is the shift in global Christianity, which we’ve been able to observe for a couple of decades, actually beginning to take effect with real action,” he said in an interview. “And the shift in global Christianity, of course, which John Allen paints so well in his book Future Church, in which the Church of the South, of the developing world, is young, orthodox, increasingly well educated and uncompromising in its hold to the historic faith.”

He said he believes it was the African Anglican bishops of an organization known as the Global Anglican Future Conference (GAFCON) “who exerted the pressure for the Episcopal Church to be suspended.”

Father Longenecker feels it is “unlikely” for the Episcopal Church to reverse course.

“It’s more likely they will see themselves as martyrs and brave pioneers who dare to follow the Holy Spirit where no one else dares to go with them and reject the suspension and go on their own into schism,” he said.

Before the Jan. 14 vote, Episcopal Church presiding bishop Michael B. Curry told the primates that the statement calling for the sanctions would be painful for many in the Episcopal Church to receive, according to Episcopal News Service.

“Many of us have committed ourselves and our church to being ‘a house of prayer for all people,’ as the Bible says, when all are truly welcome,” Bishop Curry said.

Father Longenecker said it’s also possible that more conservative parts of the Episcopal Church would split off, joining the more conservative bishops, as a group calling itself the Anglican Church of North America has already tried to do.

The vote in Canterbury this week “will strengthen their hand, and they will say, ‘We are the true Anglicans in America. We’re the ones who have full communion with the Anglicans in the rest of the world,’” Father Longenecker predicted.