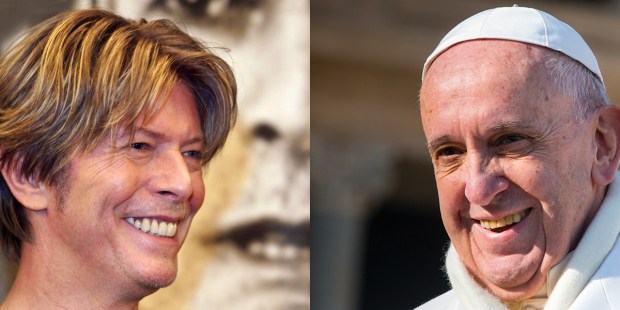 The great fantasy is to start over, be born again. The fantasy is real.

I found myself thinking of and praying for David Bowie, his family and his fans while reading this in the new book-length interview with Pope Francis, The Name of God Is Mercy, published this week.

Francis goes on to say:

Either it does not know how to cure its wounds or it believes that it’s not possible to cure them. And it’s not just a question of social ills or people wounded by poverty, social exclusion or one of the many slaveries of the third millennium. Relativism wounds people too: all things seem equal, all things appear the same. Humanity needs mercy and compassion.

In his final video, “Lazarus,” clearly a farewell, David Bowie sings about scars. He sings about freedom, presumably in the process of suffering and dying — and maybe even in the hope of eternal life.

As news broke of Bowie’s death, people shared memories of their favorite songs, and movements even seemed to be claiming him as their own. He was a sexual revolutionary hero to some. His song “Heroes” made it to the National Review list of top conservative rock songs, with this explanation:

A Cold War love song about a man and a woman divided by the Berlin Wall. No moral equivalence here: “I can remember / Standing / By the wall / And the guns / Shot above our heads / And we kissed / As though nothing could fall / And the shame / Was on the other side / Oh we can beat them / For ever and ever.”

Greg Thornbury, president of King’s College in Manhattan, had a particularly thoughtful piece in Christianity Today. He took into account “Heroes,” noting: “On January 11, 2016, the German Foreign Office officially recognized Bowie’s contribution in helping bring down the wall.”

He went on to write:

For some reason Bowie persisted in conventional God talk throughout his life. In the end, he revisited biblical themes in his work. Despite repeated reviews calling his music nihilistic, he responded, “I’m not quite an atheist, and it worries me.” Later, when paying tribute to his recently deceased friend Freddie Mercury, Bowie recited The Lord’s Prayer and told reporters, “I have an undying belief in God’s existence. For me it is unquestionable.”

Something also changed for the star after he became a father. In an interview with NPR’s Renee Montagne in 2002, she noted that — could it possibly be? — he was singing on his then most recent record about the theme of hope. Bowie replied: “I think I have to imbue my songs with a certain sense of optimism now, more than I ever did before, because I have a child.” (Indeed, it’s exceedingly difficult to keep up one’s nihilism with a toddler running around the house.)

I was struck in particular with an item I found in my inbox from Andrew Cominsky, a speaker I had heard at a Courage conference I was covering a few years ago:

For a kid with same-sex attraction who adopted the credo that weird is good, sex better and sensational times set to music lay just beyond suburbia in nearby Hollywood, I made Bowie the troubadour of my teen dreams. He was smart and sexy, and for rebel kids a guide to gender-bending bliss. I can relate to Madonna’s recent comment: “I was inspired by how he played with gender confusion.”

Strung-out and resilient, insinuating ourselves into adult clubs and the fantasies of father figures, we had fun. Even when Bowie turned the tables and exposed the sickness of the “fame” we were seeking (“What’s your name, what’s your name?”), we stayed faithful to his ever-changing persona.

Indeed, as Thornbury, put it: “To the art world, he seemed transcendent. In film, he held multiple generations transfixed. To fans, he gave hope that you could always reinvent yourself, that you need not stay mired in the same role or life phase.”

To the Christian community, however, the early Bowie initially seemed to some like an existential threat. His gender-bending characters in the ’70s on albums like Hunky Dory and The Rise and Fall of Ziggy Stardust had pastors and church leaders alarmed.

Culture matters. And so they would be alarmed. But the whole body of work and man should be considered.

I just saw a clip of an interview with Bowie where he equated his search for new expressions of music with a search for God. Which I guess means you never really land; a new riff, another spritzer of spirituality — the search is everything, more important than actually finding God. Or perhaps being found by him.

The Friday before he passed away, Iman, his wife, tweeted, “The struggle is real, but so is God.” But that isn’t really why believers should care about David Bowie. Not ultimately. His intrigue resides not in some imagined last-minute conversion — however cryptic. It lies in the Facebook, Instagram and Twitter posts of brokenhearted people who felt like when they were weak, or aliens and strangers in the world, Bowie helped them feel strong.

He was free. He could change on a dime. That’s the greatest fantasy — to start over. To be born again.

Which brings me back to Francis and this new book. That fantasy is real. That’s why he’s got the Catholic Church currently into a whole Jubilee Year of Mercy. He likes to even make mercy a verb. Why? Because people need it and want it and don’t know where they can go for it. So much of our culture and public and private life lacks mercy.

As Francis puts it, in The Name of God Is Mercy:

Pius XII, more than half a century ago, said that the tragedy of our age was that it had lost its sense of sin, the awareness of sin. Today we add further to the tragedy by considering our illness, our sins, to be incurable, things that cannot be healed or forgiven. We lack the actual concrete experience of mercy. The fragility of our era is this too: we don’t believe that there is a chance for redemption; for a hand to raise you up; for an embrace to save you, forgive you, pick you up, flood you with infinite, patient, indulgent love; to put you back on your feet. We need mercy. We need to ask ourselves why today so many people, men and women, young and old, of every social class, go to psychics and fortunetellers.

He goes on to quote G. K. Chesterton: “When man ceases to worship God, he does not worship nothing but worships everything.”

Once I heard a person say: In my grandmother’s time a confessor was enough, but today lots of people go to fortunetellers. Today people try to find salvation wherever they can.

Including in a culture of celebrity leaders, often themselves victims of this lie that mercy is nonexistent or unattainable in this life, for the weak or only to be found in one’s last days, when there is nothing left to lose.

“People are suffering,” Pope Francis says in the book. They sure are. May a song or a book and the witness of our lives help, and not add to the hurt.

Kathryn Jean Lopez is senior fellow at the National Review Institute and editor-at-large of National Review Online. She is co-author of the new revised and updated edition of How to Defend the Faith without Raising Your Voice (available from Our Sunday Visitor and Amazon.com. Sign up for her weekly newsletter here.