Death Panels Again: Will Wanting to Live be Criminalized? 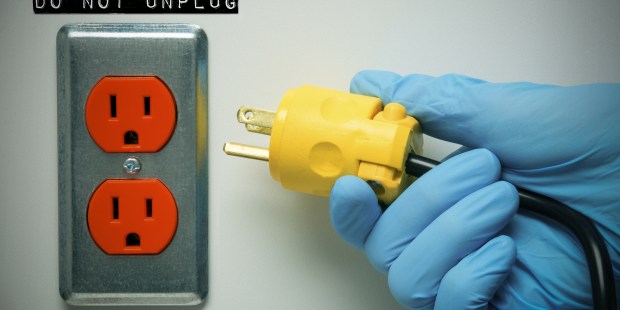 True story: A guy a couple of counties over from me just fought a six-month legal battle to stay out of jail after local authorities ruled he didn’t have the family dog put down fast enough after the vet diagnosed him with terminal cancer.

Yes, you read that right: Travis Evans, of Stafford, VA. — pet owner, husband and father to a 5-year-old girl (whom I am guessing loved her pup) — was charged and convicted of animal cruelty, a class 1 misdemeanor with possible penalties of $2,500 in fines and up to a year in prison, after local officials decided he had failed to euthanize his cancer-stricken dog, Buxton, “in a timely manner.”

According to local prosecutors, Evans should have put the dog down when the vet first recommended it upon diagnosis in December 2014. Instead, Evans took Buxton home and made him as comfortable as possible. His family showered the pup with love and affection for another seven or eight months, until Buxton began having seizures and his overall quality of life took a marked turn for the worse in July 2015.

At that point, Evans decided that keeping Buxton alive any longer would be selfish, so he took the dog to the county animal shelter to wish him a final good-bye and have him put to sleep. But upon his arrival, he was met with a nasty surprise — as if euthanizing his family’s beloved pet wasn’t hard enough, he found himself being interrogated by an animal control officer, who implied he could be arrested for failing to have Buxton euthanized sooner.

In the end, that’s exactly what happened, kicking off a six-month legal nightmare that only ended last week, when prosecutors finally withdrew their charges after Evans appealed his October 2015 conviction by a local judge.

All’s well that ends well for the Evans family, I guess, but as someone who was recently diagnosed with two debilitating and potentially terminal conditions myself, I followed this story with a growing sense of horror that didn’t go away just because the local prosecutor decided to drop this particular case. You see, I can’t help but wonder if this is where we’re headed — if my own family members could someday risk serious legal repercussions for failing to have me put down “in a timely manner.”

We’re living in an age in which euthanasia — more commonly referred to by friendly sounding euphemisms like “doctor-assisted suicide” and “death with dignity” — is becoming more prevalent and accepted in Western society. What used to be the shocking province of a couple of wackier European countries has arrived on U.S. shores, with several states having already legalized the practice, and activists around the country demanding more.

We’ve already seen what happens at the beginning of life when lethal intervention is legal and the prognosis is less than ideal. An entire industry devoted to the identification and termination of imperfect embryos cropped up in the wake of improved genetic screening and legalized abortion, and now nine out of every 10 babies prenatally diagnosed with Down syndrome are aborted — a statistic so staggering that activists within the Down community are worried there won’t be enough demand for continued research to improve the lives of those affected by the disorder, and that mothers who choose not to abort their Down diagnosed kids will be condemned as selfish, irresponsible monsters.

Last night I read through the monthly newsletter for the charity devoted to one of my disorders. Fully a third of it was devoted to an interview with a genetic researcher explaining how to use IVF to identify and destroy any babies who share our faulty genes, before we get pregnant and actually give birth to more people doomed to suffer like us. The article’s sidebar was peppered with comments solicited from my fellow sufferers of childbearing age. Their verdict was unanimous: To knowingly allow a child to be born with the disorder we share would be cruel and irresponsible.

Elsewhere, a Belgian family is suing a Catholic rest home for refusing to allow doctors to administer a lethal injection to their family matriarch, who was suffering from metastatic cancer. The Catholic facility agreed to discharge the woman so her family could carry out the euthanasia at home, but the family’s lawsuit claims that by refusing to let doctors administer the lethal shot on their property, the Catholic home delayed the woman’s death by a few days, causing her unnecessary, terrible pain and suffering.

Across the board and around the world, the sentiment is the same: no one wants to live like that.

But here’s the thing: some of us do.

If I’m honest, there are already days — a lot of them, really — when it hurts just to be alive. Sometimes even the strongest pain meds don’t let me drag myself out of bed. My body is disintegrating slowly, and there is little I can do to stop it. Aside from death, there is no cure for what ails me. Realistically, things will only get worse with time, but since I’m not quite 35, I hope I have a lot more time to live on this earth, suffering or not.

Don’t get me wrong. If I could stop the suffering, I would — but not at the expense of my continued presence here on Earth.

If we can prosecute a man for failing to put a cancer-stricken dog out of its misery soon enough after a doctor gives that deadly recommendation; if we look with contempt on parents who give birth to genetically imperfect children, will we someday do the same to people who fail to comply with similar recommendations when it comes to their human loved ones?

For my sake, and the sake of my kids, I hope not.