Kathleen Parker and the Strange Heresy of Ted Cruz 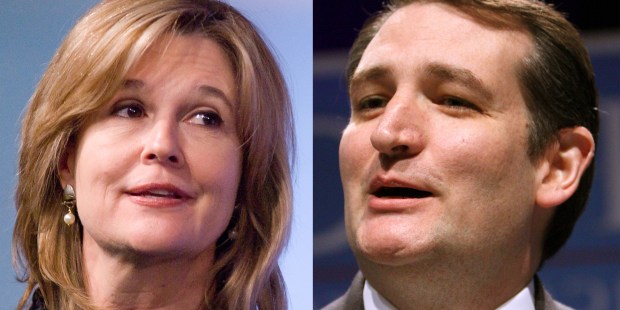 Is it too much to ask that journalists and pundits actually know the basics about Christianity?

Ted Cruz, it seems, had called upon the Body of Christ to rise up in support of his presidential bid, which led Kathleen Parker, one among her nodding panelists at CNN, to feign offense that Cruz should be begging Jesus to come up out of his grave and write his name on a ballot in Iowa.

“I don’t know anyone who takes their religion seriously who would think that Jesus should rise from the grave and resurrect himself to serve Ted Cruz,” Parker said. “I know so many people who are offended by that comment.”

Over at The Federalist, Mollie Hemingway duly explained, with ironic patience, just how many things Parker got wrong about the faith that seven in 10 Americans profess, and that is the bedrock of the very civilization all about her eyes and ears.

Secularism among journalists is often thought a necessary enhancement to their “unbiased” outlook, but it’s not too much to ask that we have a few journalists, just here and there, who actually know something about Scripture and the Christian faith. If you do not know that the central tenet of the Christian faith is that Jesus Christ rose from the dead on Easter, appearing in the flesh to his disciples, and if you do not know that the Church is the Body of Christ, as St. Paul says, then what else are you not going to understand?

We would stare in astonishment at someone who said, “Galileo? Never heard of him,” as Ta-Nehisi Coates said, without embarrassment, about St. Augustine. Parker merits the same stare.

Has she never seen a single painting of the Resurrection? Never seen Caravaggio’s  Doubting Thomas, in which the risen Lord guides the finger of the apostle to probe beneath and within the flesh of the lance-wound in his side? Does Parker not know why we call him Doubting Thomas? Never seen a single one of the many renderings of Jesus walking with the two disciples on the road to Emmaus? Never read Dante’s Divine Comedy? Or Milton’s Paradise Lost? Or John Donne’s “Death Be Not Proud”?

Has she never read Dostoyevsky’s The Brothers Karamazov? What did she think Alyosha and the boys were talking about at the end of that novel when they return from the funeral breakfast for their deceased friend? What did she think Handel was celebrating in The Messiah? What did she think William Wyler was doing at the conclusion of “Ben Hur” when he had that torrent of healing water coming down from Calvary?

Speaking of Calvary, why does she suppose Christians celebrate the triumph of the Cross of Christ crucified? Do people cherish the noose that hanged their brother? Do people save the bullet from their cousin’s firing squad? Why do Catholics and Orthodox make the sign of the cross? Has she never wondered why we would have paintings of the crucifixion, if Christ’s in his grave and all’s wrong with the world? Does she not know anything at all about Christ’s victory through death, over death?

What on earth can she have made of The Chronicles of Narnia or The Lord of the Rings?

With no understanding of the resurrection of Christ, in the flesh, what sense could she make of Easter, or of the legend of King Arthur, returning someday from Avalon?

We are not talking about something arcane here, something smuggled away in the darker corners of the Christian consciousness. It is proclaimed boldly, openly, daily. Every single Mass is a reenactment of Calvary and a celebration of Easter. Never seen the fine film Lilies of the Field, with Sydney Poitier singing the old “Amen” spiritual, ending with Christ rising triumphant?

We mustn’t give Parker a pass, but I am cruel only to be kind. We need journalists, even secular ones, to know something about Christianity, and how it has formed and advanced civilization into this troubled century. Without that knowledge, they will have nothing to offer – no informed point of view, no insights, no “unbiased” ability to analyze the challenges before the West.

Let’s start with the most basic of the basics: Jesus Christ rose from the dead, and the Church is both his Bride and Body.

Anthony Esolen currently serves as professor of English at Providence College and is perhaps best known for his widely acclaimed translation of Dante’s Divine Comedy. He has also authored several original works, including The Politically Incorrect Guide to Western Civilization and the satirically titled Ten Ways to Destroy the Imagination of Your Child. He regularly writes for publications including The Catholic Thing, Magnificat, and Crisis magazine.