Pope at Synagogue: “From Enemies and Strangers to Friends and Brothers” 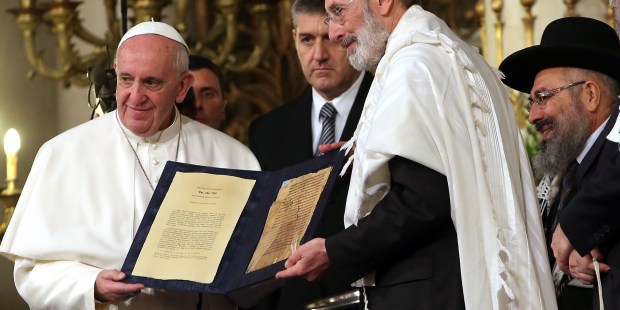 Franco Origlia/Getty Images
ROME, ITALY - JANUARY 17: Pope Francis exchanges gifts with with leaders and members of the local Jewish community during his visit to the Rome's synagogue on January 17, 2016 in Rome, Italy. The visit marks the third time a pontiff has been invited to the synagogue, following on from the visit by Benedict XVI in January 2010 and the historic encounter of Pope John Paul II with former Rabbi Elio Toaff there in 1986. (Photo by Franco Origlia/Getty Images)
Share
Print
Aleteia - published on 01/18/16

Third pope to visit the Great Synagogue of Rome: “chazaqà”

“The past should serve as a lesson for the present and the future. The Holocaust teaches us the need to be on maximum alert in order to be able to intervene in a timely manner to defend human dignity and peace.” Pope Francis ended his speech at the Great Synagogue of Rome by sparing a thought for the victims and survivors of the Holocaust. He is the third pope to enter the synagogue of the city of which he is bishop.

His Holiness arrived ten minutes early in his usual blue Ford Focus with no procession or entourage. He was welcomed by the president of Rome’s Jewish community, Ruth Dureghello, the president of the Union of Italian Jewish Communities (UCEI), Renzo Gattegna and the Holocaust Museum Foundation, Mario Venezia. Francis laid a large basket of white flowers beneath the plaque that commemorates the deportation of Roman Jews in 1943. He then walked down Via Catalana to leave another floral tribute beneath a plaque that commemorates Stefano Gaj Taché, the boy killed in a terrorist attack in 1982. The pope spent some time there with the victim’s relatives.

The president of the Jewish community, Ruth Dureghello, was visibly moved: “Today we are yet again writing history.” She recalled Francis’ words against anti-Semitism and those who deny Israel the right to exist. She warned that “peace is not achieved by sewing terror, carrying knives in one’s hand or causing bloodshed in the streets of Jerusalem, Tel Aviv, Ytamar, Beth Shemesh and Sderot. … All of us need to tell terrorism to stop.”

The president of the UCEI, Renzo Gattegna, hopes the significant progress made in terms of dialogue can spread further, across “the entire population,” because “there are still frequent instances of prejudices and speeches communicating contempt, which we find offensive and hurtful.”

Gattegna then observed that “at this difficult time, Christians and Jews share the same destiny,” forced as they are “to defend themselves against ruthless, violent and intolerant enemies who use the name of God to spread terror, committing the most atrocious crimes against humanity. The only way to ensure salvation for all of us is to form a strong coalition.”

Finally, Rome’s chief rabbi, Riccardo Di Segni, explained that according to “Rabbinic juridical tradition, an act that is repeated three times becomes chazaqà, a set habit. This is definitely the concrete sign of a new era. … We welcome the pope to reiterate that the religious differences, to be maintained and respected, must not justify hatred and violence. Instead, these must be enthused with friendship and collaboration and the experiences, values, traditions and great ideas which characterize our identity must be used to serve our communities.”

Francis then took the floor, recalling that “already back in Buenos Aires I used to go to the synagogues and meet the communities that had gathered there, to experience Jewish celebrations and commemorations firsthand.” A “spiritual bond” that “facilitated the development of real friendships and also inspired a common effort.”

Francis made his own an expression John Paul II had used to refer to Jews: “elder brothers.” Indeed, “you are our elder brothers and sisters in the faith. We all belong to one family, God’s family. He accompanies us and protects us because we are his people.

“As Jews and Catholics, we are called to assume our responsibilities with regard to this city, making our chiefly spiritual contribution and encouraging the resolution of the various problems that persist.”

Quoting the Council document Nostra Aetate, the pope reiterated the Church’s rejection of “all kinds of anti-Semitism and condemned all forms of insult, discrimination and persecution that derive from this.” He recalled the importance of further theological study: “Christians cannot understand themselves without referring to their Jewish roots and the Church, while professing salvation through faith in Jesus Christ, recognizes the irrevocability of the “Old Alliance” and God’s unwavering and faithful love for Israel.

The pope urged: “We must not lose sight of the great challenges the world faces at present. The need to achieve an integral ecology is a priority and as Christians and Jews we can and must communicate to the whole of humanity the Bible’s message about care for creation. Conflicts, wars, violence and injustices deeply wound humanity and call upon us to reinforce our efforts for peace and justice.

“Violence by man against man,” Francis recalls, “is in contradiction with any religion worthy of that name, and in particular with the three great monotheistic religions. … Every human being, as a creature of God, is our brother, regardless of his or her origin or religious affiliation. Each person must be viewed with favor, just as God does, who offers his merciful hand to all, regardless of their faith and of their belonging, and who cares for those who most need him: the poor, the sick, the marginalized , the helpless. Where life is in danger, we are called even more to protect it. Neither violence nor death will have the last word before God, the God of love and life. We must pray with insistence to help us put into practice the logic of peace, of reconciliation, of forgiveness, of life.”

Finally, Bergoglio remembered the extermination of the Jewish people: “Six million people, just because they belonged to the Jewish people, were victims of the most inhumane barbarity perpetrated in the name of an ideology that wanted to replace God with man. On October 16, 1943, more than a thousand men, women and children in Rome’s Jewish community were deported to Auschwitz. Today I wish to remember them in a special way: their suffering, their fear, their tears must never be forgotten. And the past must serve as a lesson for the present and for the future. The Holocaust teaches us that utmost vigilance is always needed to be able to take prompt action in defense of human dignity and peace. I would like to express my closeness to every witness of the Holocaust who is still living, and I address a special greeting to those who are present here today. Shalom Alechem!”

In partnership with Vatican Insider.